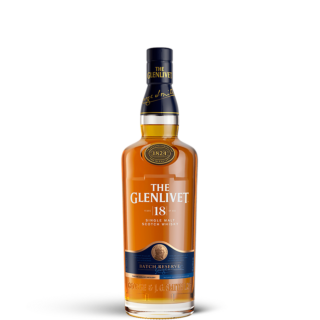 A classic Speyside dram, the 18 year old has won more awards than any other The Glenlivet expression

Palate Honey, spices and almonds with zesty bursts of orange

A flagship of The Glenlivet Distillery, this expression is matured for 18 years in a combination of first and second fill American oak and sherry casks. The American oak helps deliver the signature tropical fruitiness, while the Sherry cask contributes a delicate spiciness to round the whisky out. It’s another classic 40% ABV The Glenlivet bottling and has picked up two golds at the prestigious International Wine and Spirits Competition. You can enjoy equally special limited edition and special releases by joining The Whisky Club