How to Buy Your Own Scotch Whisky Distillery

It’s always important to spend quality time with your father. Case in point, Melbourne’s David Prior, who from the age of 18 spent every Friday night sitting with his dad in the study, discussing the week’s events at the family business over a Scotch or two. “My father has been a whisky drinker all his life. He was never a beer or wine man,” David says. This weekly ritual continues today, a Friday evening debrief over a dram with his wife, Sallie. So the love for the good stuff clearly runs deep, but how on Earth does one get to live the dream, and buy their own 200 year old Scotch distillery?

There’s no denying it, it takes years of hustle to achieve such dreams, and hustle is something David’s well versed in. He’s a man you’re more likely to have come across on the pages of Australian Financial Review than your favourite whisky blog, having grown the family business – Baroda, a sustainable packaging company – with his father to great heights over the Nineties and Noughties, eventually selling to Visy in 2007.

After spending some quality time with his surfboard and yoga mat, Prior saw the opening for his next big venture – bringing organic yoghurt to the masses, and in 2009 five:am yoghurt was born, self funded with $4m from the sale of Baroda, his life savings, and mortgaging his home.

“There was no way that the banks were going to get involved unless they could see that the founder had put everything on the line. [My wife] understood the risks and at the end of the day we were in it together. I told her that if it didn’t work, I was going to become a yoga teacher.”

Luckily, his Plan B wasn’t needed, and by 2011 his yoghurt was flying off the shelves at Woolies. The yoghurt business was good for David and soon enough caught the eye of UK giant PZ Cussons, who purchased the concern for some $80m in 2014.

It wasn’t long after the sale of five:am that David had to scratch the business-building itch once again, and in 2015 the opportunity to purchase Bladnoch came up. Now, if most of us said to our partner that we wanted to take a good chunk of our life savings to buy a bankrupt distillery on the other side of the planet, the answer would be a firm “No!”, but luckily for David (and us), Sallie told him to go for it. When she visited the site and saw the work needed to get it up and running though, she thought he’d gone crazy, and that there were more issues than opportunities. But of course there was also the warehouse full of barrels of whisky, quietly ageing away in the dark…

Who wouldn’t want to own this?

Never fear though, another £5m on top of the £20m purchase price and the hire of legendary master distiller Ian MacMillan, and the distillery is back in production, the state-of-the-art facility filling casks with new make spirit, and those sleepy casks in the warehouse finally being bottled – and here’s where David’s punt really starts to pay off, the whisky is superb as you’ll soon discover for yourself. The distillery has a 1.5 million litre a year capacity – that’s nudging 3 million bottles. Not bad for a distillery that had almost ceased to exist years before.

Bladnoch’s stills are still no more.

“I’ve been lucky enough to be able to go into two businesses I’m incredibly passionate about. One being organic food and the other being whisky” says Prior, well aware of the responsibility of owning such a brand. He acknowledges and respects the distillery’s past, while keeping his eyes firmly planted eye on the future, and the re-emergence of Lowland single-malts. Prior’s daring attitude has seen him launch a blended malt as well, known as Pure Scot, and aimed squarely at the younger market. It’s ruffled a few feathers though… “There are whisky bloggers out there who are saying, ‘That’s not what Scotch is supposed to look like or taste’, but that’s fine,” he says. “A lot of other people are telling us they love the fresh approach, the points of difference.’’

Roll out the barrels!

Recommissioning the distillery is bringing new employment opportunities to the area and the local community is right behind him, but Prior hasn’t forgotten about home, having established the charity “Culture is Life”, a not-for-profit organisation helping to strengthen Aboriginal and Torres Strait Islander culture, to prevent youth suicide.

What’s next for David Prior? Who knows, but for now he’s a happy man, bringing the whisky circle to a close.

“It was honestly one of the highlights of my life, to be able to close out that circle, [My father] is someone that introduced me not just to whisky but to business, and to be able to take him to the distillery and to literally pour him a dram from one of our casks … there was a huge sense of satisfaction for both of us.”

Looking good and tasting even better!

Sounds like he’s got a lot on his plate, but for David, it’s simple… “I look at it like: I’ve got my life, my family, my surfing, my yoga and my business. They’re all intertwined, they’re not separate from each other”.

So there you have it. Spend time with your dad. Learn from him. Work hard. Play hard. Relax. Use the support of your family. You never know, you too might own your own distillery one day too.

together with the Official Whisky Club Glencairn.

Back in May 2017 co-founder of The Whisky Club Bertie Cason was introduced to David by a longstanding Club Member and friend of David’s, and the rest is now true whisky history.

We’re now thrilled to present a real Club effort that’s not only resulted in Bladnoch’s first ever exclusive release, the 10 Year Old Cask Strength Lowland Single Malt Created Exclusively for the Club, but also gives you the unique chance to meet directly with David for an exclusive tasting and get the lowdown on what it takes to run your own Scotch distillery at a very special event at The Whisky Club Melbourne Clubhouse, Boilermaker House, on Tuesday October 9. 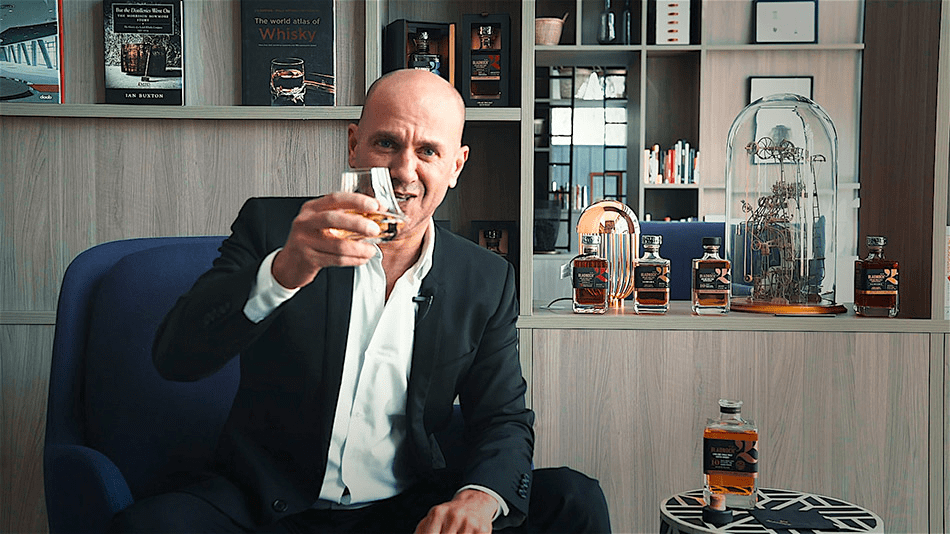 If you haven’t already, join the Club free now to get your hands on a bottle of this world exclusive, never-to-be-repeated release while stocks last! ?