Sherry, like knitting, enjoys huge popularity with grannies and hipsters alike, but it’s only once they’ve drunk it all and the empty casks are refilled with delicious malt spirit that the real magic happens.

PX, Oloroso, Manzanilla, Montilla… staples of the whisky drinker’s lexicon and integral to whisky maturation, but what exactly are the differences between the various types of sherry and how does each one affect whisky? We break them all down for you here and provide some all-important recommendations for your whisky shelf…

When producing the famous Spanish fortified wine from the Jerez, the flavours are driven by oxidation rather than by oak, while in the whisky maturation process, it’s the other way around. Sherry producers prefer a cask with little impact – the Scots want the opposite. The ‘sherried’ character of whisky with its delicious mix of malt, raisins, figs, almonds, cinnamon and cloves can mostly be attributed to the sherry itself, as well as the complexities involved in the interaction of sherry with oak.

What is it?
The most popular of the ‘whisky’ sherries, Oloroso is a dry wine made from palomino grapes. Ranging from 17%-22% ABV it’s best suited to oxidative ageing where it develops a beautifully dark colour.

What does it do to the whisky?
This right here is your Christmas cake in a bottle. Along with nuts, it’s packed full of dark fruit flavours like raisins, figs and plums, delivering a rich oily feel. It imparts a deep a deep amber red hue that’s nothing short of mesmerising to see.

Which ones should you be drinking?
1. The Glenlivet Nadurra Oloroso
2. Tomatin 18 Year Old
3. Glenfarclas 10 Year Old 50%ABV created exclusively for The Whisky Club

What is it?
Pedro Ximénez is incredibly, deliciously sweet. PX grapes originated in the south of Spain, where the warm climate helps with an important part of what makes PX so unique. The grapes are dried in the sun – almost to the point they become raisins – before being smashed and fermented. The result is a sugar count three to five times that of a cola. That is sweet!

What is it?
Moscatel is a sherry grape with prominent fruity notes including jasmine, orange blossom and honey suckle as well as citric notes of lime and grapefruit. The vineyards are generally close to the beach, in sandy soils, which brings considerable maritime influence. Moscatel has a sweet palate leading to a slightly dry, bitter finish.

What does it do to the whisky?
Moscatel-matured whiskies pick up fruity, floral and sweet notes including chocolate and golden syrup. Depending on the muscatel grape variety the effect on colour can be nil through to a rich, deep chestnut.

What is it?
Amontillado comes from Montilla in the south of Spain. Another dry wine, it sits somewhere between Oloroso and Fino. In fact, it starts out the same as Fino before the flor is broken down to allow an increase in oxidisation.

What does it do to the whisky?
Since Amontillado sits between Oloroso and Fino, whisky matured in its casks will do the same. Less sweetness than an Oloroso, but still nutty and dry. The whisky will tend to be golden, though not as dark as an Oloroso.

What is it?
Fino, meaning refined, is a light sherry. Dry and lower in alcohol at just 15%-17% ABV, it’s also the result of a ‘gentler’ production method – rather than violently crushing the grapes as is the norm, they’re softly squashed under their own weight – nothing but gravity involved here folks. When it’s time to put it in the barrel, they don’t cram it full either. Plenty of space is left to develop a layer of Flor, which gives Fino it’s amazing fresh taste.

What does it do to the whisky?
Fino casks will add a dryness to the whisky, along with light fruits, floral notes, and of course sweetness. As Fino is light in colour itself, it has little effect on the colour of the whisky.

What is it?
Manzanilla is very similar to Fino, the major differences being that the grapes are harvested earlier, bringing a higher acidity, and that it is matured by the Atlantic Ocean in the city of Sanlúcar de Barrameda which imparts beautiful salty marine notes to the sherry.

What does it do to the whisky?
A Manzanilla matured whisky will show lovely salty marine flavours. It’s a little acidic too which brings a beautiful fresh dryness to the whisky, plus plenty of fruit. Like Fino, it has little effect on the colour of the whisky.

Which ones should you be drinking?
Our Whisky of the Month this May: The 2009 Inchmurrin Manzanilla Finish Single Cask created exclusively for The Whisky Club 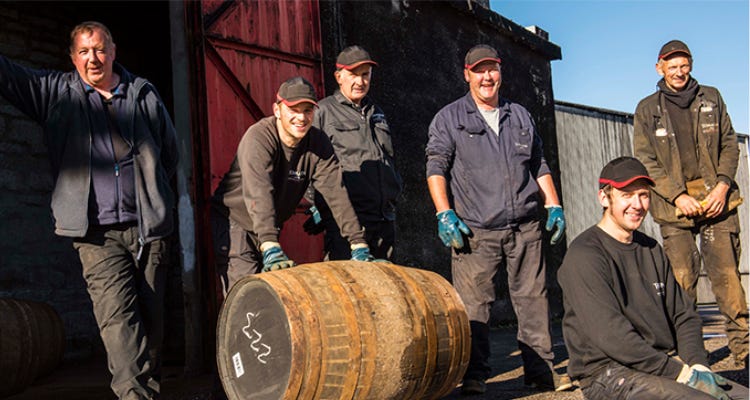 What is a Single Cask Whisky?

This month, The Whisky Club has pulled out all the stops to bring you two real treats. First up, having thrown the challenge to Graham Eunson from Tomatin Distillery to create something super special for our Members…