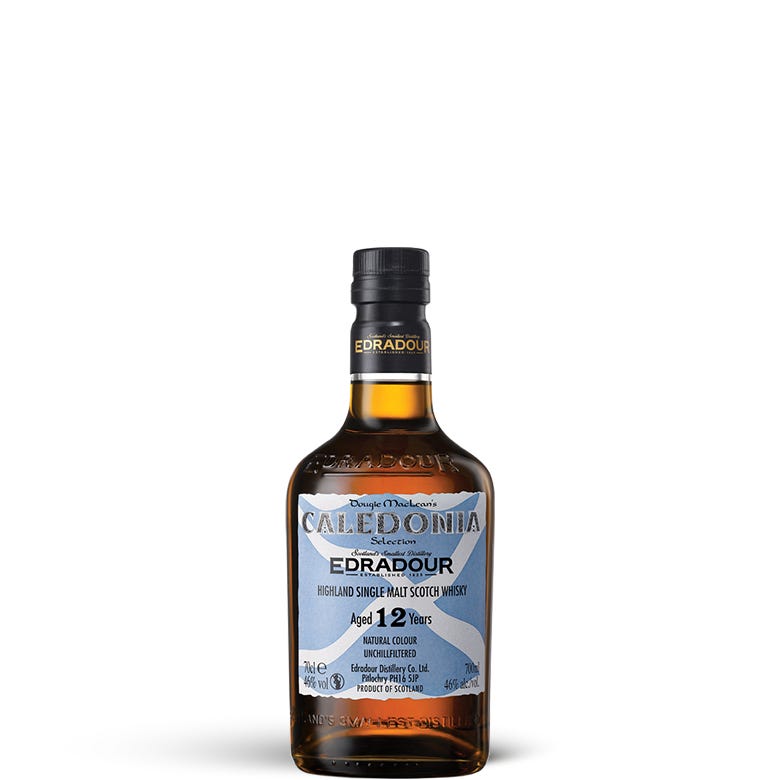 We had a banging start to the year in 2017 with the exclusive Club import of the tiny Edradour Distillery’s big and robust Caledonia 12 Year Old.

Nose Rich with rum and raisin ice cream. Figs and dates cooking on an open stove with splashes of sherry and hints of oak. Bursts of manuka honey, polished leather and a hint of tobacco. Orange marmalade and toffee praline

Finish Gently warming, spicy and dry with hints of milk chocolate, hot chocolate cocoa and just a touch of nuttiness

Food Match To start: pairs well with game like duck or rabbit, or a heavy pâté and cheddar cheese The middle: roasted Sunday lamb or chops on the BBQ To finish: vanilla ice cream, rich vanilla slice, or a beautiful creamy brie

Edradour produces a typical full and intense style of Highland malt with very small pot stills. Up until the 2002 purchase by Andrew Symington, the distillery’s range was limited to a 10 year old single malt and Edradour had built a pretty undesirable reputation for batch variation (inconsistent whisky). Behind closed doors this is attributed to the distillers at the time’s almost permanent state of inebriation…

Symington however, together with new distillery manager Iain Henderson (ex-Laphroaig and retrieved from retirement), very cleverly turned this perceived weakness into what has today become Edradour’s key strength. By shifting the focus to single cask expressions and experimenting with a large variety of casks such as port, Sauternes, Madeira, Burgundy, chardonnay, super Tuscan and even other spirit casks such as rum, they celebrated and enhanced the variations in Edradour’s spirit, in so doing creating a huge amount of distillery bottlings, arguably the most diverse range of whiskies in the world, and a cult following of whisky fanatics of course. Ever the traditionalists, and no doubt thanks to Henderson’s influence, Edradour recreated the traditional peated style of highland whisky that had died out in the early 1900s. First released in 2006, this expression is called Ballechin and is peated to 50ppm, one of the most heavily opeated whiskies outside of Islay.

Despite Edradour’s huge range, a very limited amount makes it to Australia and Dougie Maclean’s Caledonia Selection 12 Year Old is no exception. Singer/songwriter Dougie Maclean is a Scottish legend who penned the song Caledonia in under 10 minutes on a beach in Brittany in 1977 during a bout of homesickness. Caledonia has gone on to become the unofficial Scottish anthem, resonating with the Scottish diaspora across the globe, much like Cold Chisel’s Khe Sahn amongst expat Australians. The bottling was originally conceived as a one-off single cask selected in 2009 by Maclean himself but it was so popular that Edradour decided to continue the bottling of this single malt but this time releasing it as a 46% single malt which is initially matured in ex-Bourbon casks followed by an Oloroso sherry maturation of four to five years.

“I wrote Caledonia, in 1977 on a beach in Brittany, France, when I was genuinely homesick for Scotland. My life has always been based in Perthshire. For me, the location of Edradour, with its neat cluster of whitewashed buildings, traditional equipment and employment of ancient methods of making single malt whisky, combined with its state of the art bottling facility, typify Caledonia. So it is great to be joining forces with Andrew Symington and Edradour Distillery, to bring you this wonderfully rich and complex 12 year old single malt.” Dougie Maclean.

Beyond the Scottish sentimentality at the heart of its brand, this is a big and robust dram; a stand-out whisky from one of the largest and most diverse whisky ranges in the world which has attracted its cult following for very good reason. We’re delighted to welcome Edradour Caledonia 12 Year Old to our shores and about as far from Scotland as you can get, exclusively for our members’ enjoyment.

Edradour Distillery was established in 1825 as a farmers’ cooperative and is the very last original farm distillery still operating in Scotland. The cooperative selected an extremely picturesque location which helped guarantee Edradour’s longevity, as a succession of owners have consistently decided to maintain and promote the distillery’s charm. Today Edradour is still housed in its original farm buildings and very little has changed other than the introduction of electricity in 1947 and the conversion of a barn into a visitor centre during the 1980s. Compared to the rest of Scotland’s distilleries everything at Edradour is small, in fact the stills are the smallest size permitted for commercial distilling by Customs & Excise, much like a modern day Tasmanian distillery if you’ve been lucky enough to visit one. All the distilling equipment, mostly made of wood, is crammed into one room with all processes using traditional methods with no automation.

The distillery was originally named Glenforres before being changed to Edradour in 1837 and peacefully went about producing whisky for the next century before the business was taken over by giant Glasgow blending company, William Whiteley and Co. in 1933, who promptly changed the name back to Glenforres. Whiteley had already been using Edradour in a number of their blends and the purchase was intended to give them control of the source.

Meanwhile across the pond in America, prohibition had ended and the market was open for business. This led a seemingly unlikely group of buyers to Whiteley’s door and in 1938 two American gentlemen with very close links to the mafia bought Glenforres for $325,000. The deal was funded by Frank “the Prime Minister” Costello, boss of the Luciano crime family who had cut his teeth selling liquor during the Prohibition years and knew the liquor trade intimately. Costello sensed the coming whisky boom and subsequently pocketed a margin of every bottle of Edradour ‘King’s Ransom’ whisky sold in the USA. The mafia ownership had an unexpected benefit for future custodians of the distillery however, because thanks to a policy of not investing in any refurbishment or modernisation none of the equipment was ever upgraded which explains how today the distillery still uses all of the original 19th century equipment.

In 1982 Glenforres was sold to Pernod Ricard who promptly renamed it Edradour. By now single malt whisky was beginning to gain traction against blends and Pernod saw a fantastic opportunity in marketing Scotland’s smallest and allegedly most beautiful distillery. A visitors’ center was opened that same year and in 1986 the first Edradour single malt was released as a 10 year old.

All this time the distillery’s whisky had never quite lived up to its full potential, but thankfully that changed in 2002 when famed independent bottler Andrew Symington purchased the distillery. Andrew rapidly expanded the range from just the 10 year old to include a variety of wood finishes, cask strength expressions plus a peated range and today Edradour boasts the largest range of whiskies readily available for purchase of any distillery in Scotland. Expansion is currently underway for the first time in almost 200 years with an identical replica of the distillery being built on the other side of the burn (stream) that runs through the middle of the property and the original buildings will continue to produce Edradour while the new buildings will produce Ballechin, Edradour’s peated expression.