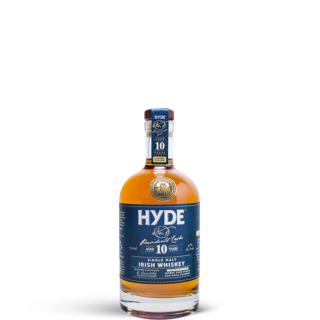 Nose Opens with delightful notes of peaches & cream, vanilla and honey followed by heavier notes of caramel and chocolate infused with spices. Hints of fruits including orange, lemon and banana with a beatiful barley malt softness

Palate Wonderfully smooth and complex. Creamy and fruity with notes of caramel and Manuka honey, apricot and plum all balanced beautifully with a silky malt texture

Food Match Very well matched with a hearty Irish stew, or try gingerbread and mature cheddar for a mouth-watering accompaniment

Hibernia Distillers’ focus is on wood finishing, a relatively modern innovation introduced in the 1980s, which has since become hugely popular and widespread practice through the industry. As we can all attest to, the results often vary in quality due to the various factors at play in maturation. Most important of these is the quality of the casks, while other factors include climate, maturity and quality of the spirit. Judging by their early releases the team at Hibernia Distilleries have shown a level of maturity and understanding of whiskey making that belies their fledgling status, impressing whisk(e)y critics across the world with two incredibly well finished releases; Hyde No.1 President’s Cask 10 year Old Sherry Cask Finished and Hyde No.2 President’s Cask 10 year Old Rum Cask Finished, the former being named Best Single Malt Irish Whiskey at the 2016 San Francisco World Spirits Competition.

Today’s malt is the flagship Hyde No.1 President’s Cask 10 year Old Sherry Cask Finished. This remarkable whiskey is initially matured in American oak ex-Bourbon casks for 10 years before undergoing a second 10-month maturation in Oloroso sherry casks to add a deeper complexity to the underlying flavours. The prestigious award winner is non-chill filtered, bottled at 46% ABV and produced in very small batches of only 5,000 bottles. Each bottle carries a unique bottle identification and batch number allowing it to be traced right back to its original wooden cask and fill date. It’s a stunning example of why we’ll all be drinking much more Irish whiskey in the years to come.

Maturation: Initially matured in American oak ex-Bourbon casks for 10 years before undergoing a second 10-month maturation in Oloroso sherry casks to add a deeper complexity to the underlying flavours.

Hibernia Distillers is part of a new wave of distilleries and bottlers reviving Ireland’s whiskey industry. In the mid to late 1800s Ireland was the world’s biggest whisk(e)y producing nation and claim, much to the Scots’ disgust, to have invented the stuff. Either way they laid the foundation for what we today recognise as the industry. In fact at one stage there was more Irish whiskey consumed in Scotland than Scotch, however, due to a run of very un-Irish bad luck at the turn of the last century things didn’t quite stay that way.

Irish whiskey was ubiquitously regarded as far superior to Scotch, so much so that the lads in Dublin added the “e” to differentiate theirs from the Scots’. Sadly for them the wheels began to come off during the 1900s when a 1909 Royal Commission ruled that grain distilled in both column and pot stills could be called whisk(e)y. This ruling led to the creation of blended whiskies as we know them today and left the way open for the big Scottish outfits to bring a more affordable whisky to the mass market, giving them an edge over the Irish. While this in itself was not insurmountable it positioned the Scots to take advantage of the market in the coming years when Ireland went to war. The resulting civil unrest saw the start of many distilleries closing and between the subsequent Anglo-Irish Trade War and America introducing prohibition, the industry was in serious trouble. Sadly it was unable to survive the ensuing Depression and Second World War, by which time blended Scotch’s popularity had all but covered the market.

By the 1980s there were only two distilleries left in Ireland, Bushmills (Bushmills) in the North and Midleton (Powers, Redbreast, Paddys, Green Spot and Jamesons) in the South: the situation was dire. Fortunately some French investment and innovation brought about change for the better. In 1988 French giant Pernod Ricard (Chivas, Glenlivet, Havana Club, Beefeater, Absolut…) bought Midleton and the new owners saw an opportunity in the light, triple-distilled Jamesons to attract non-whisky drinkers: something they’ve executed with staggering success and in the process single handedly saving the industry.

A third distillery, Cooley, (Greenore, Kilbeggan, Tyreconnel and Connemara) entered the market in 1987 and for the next two decades those three distilleries were the sum total of Irish distilling activity. They didn’t do a bad to job though because today Irish whiskey is booming again with a 3000% increase since 2002 and almost a billion Euros of investment planned for the next decade.

And that’s where the Hyde boys come into the picture. They’re part of a new generation of Irish distillers and bottlers reviving the spirits of their forefathers by getting stuck in to some serious whiskey making. Established in 2014 by brothers Conor and Alan Hyde, Hibernia Distillers is an independent bottler located in Inis Eonáin, County Cork. The brothers come from a long line of publicans and are the first generation since 1640 not to own and operate a pub in Cork, instead expanding the family tradition by making whisky, something they are doing very well judging by the huge success of their first few releases. Innovating on traditional independent bottling, Hibernia Distillers’ focus is on wood finishing, taking advantage of Cork’s relatively warm temperate micro-climate to further enhance their whiskeys with a variety of casks including Sherry, Port, Madiera, rum and Burgundy.

Hibernia’s current stock of mature whisky comes from Cooley Distillery and future bottlings will come from new-make spirit currently being laid down by the Great Northern Distillery. This whiskey is being made especially for Hibernia to a propriety recipe which gives the team control of the entire process. We can expect to have our first taste of their house spirit by 2025, a very long wait indeed if their already award-winning current releases are anything to go by.