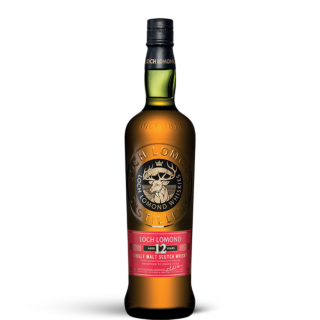 In June 2017, we celebrated a remarkable whisky unlike any we’ve ever tasted at Whisky Club HQ. Exclusive to members, this smile-inducing whisky was a gold medallist at the San Francisco World Spirits Competition and the Berlin International Spirits Competition. It also landed a whopping 93.5/100 in Jim Murray’s 2017 Whisky Bible.

Set up to be totally self-sufficient, Loch Lomond Distillery is one of only two remaining “dual” whisky distilleries in Scotland, distilling both grain and malt whisky in the same facility. While this was common practice in the 19th century, consolidation and efficiencies during the 20th century meant that distilleries nowadays are either one or the other. Loch Lomond’s set up is totally unique, featuring a set of traditional pot stills, three sets of Lomond stills and three sets of column stills. A Lomond still, as you’re no doubt wondering, is a hybrid style of still that features a traditional pot but is fitted with a rectifying head (like a column still). This allows a further range of characters to be produced, allowing the distiller to produce different kinds of whisky from a single apparatus. If you’ve had the pleasure of visiting McHenry and Sons distillery in Tasmania you’ll have seen exactly such a still in action. We mentioned earlier that Duncan Thomas, Loch Lomond’s founder, was one of the great innovators of the industry. In his early days at Littlemill he replaced the pot stills with hybrid refracting stills and later perfected this design when he commissioned what became known as the Lomond still for the newly built Loch Lomond Distillery. Lomond stills have since been used across the industry at distilleries like Miltonduff, Glenburgie, Inverleven, Scapa and most recently Bruichladdich.

In purchasing Loch Lomond, Glen Catrine had the means to heavily exploit the private label and bulk whisky market; an unglamorous but highly lucrative business. Over the next three decades they rapidly build up the distillery’s infrastructure to flexibly produce a wide variety of whisky styles for their customers including traditional peated and unpeated single malt, peated and unpeated single malt from Lomond stills (a lighter, floral style), single grain and blended whisky. In addition to producing for the private and bulk market, the company also bottled and marketed whisky under their own labels including Loch Lomond, Inchmurrin, Inchmoan, Glengarry, Clansman and High Commissioner, but the malts never really got the attention they deserved and aside from a small annual output of original bottlings, Loch Lomond single malt was mainly the preserve of independent bottlers.

The new management’s focus on single malts has meant that Master Distiller Michael Henry has free reign to create exceptional, unprecedented single malt whisky from one of the world’s most diverse barrel stocks. Loch Lomond 12 Year Old is an excellent example of this and is certainly unlike any whisky we’ve ever tasted at Whisky Club HQ. Matured in three types of casks; bourbon, refill and re-charged, the whisky has an incredibly succulent fruity character of peach, pear and apricot with a vanilla sweetness as well as the trademark hints of peat and smoke found in Loch Lomond whiskies. It’s a very well balanced malt whisky and this certainly hasn’t gone unnoticed with a whopping 93.5/100 in Jim Murray’s 2017 Whisky Bible, Gold at the 2016 San Francisco World Spirits Competition and Gold at the 2017 Berlin International Spirits Competition.

Available in Australia for the very first time and exclusive to Club members only, this is a sessionable malt like no other in my opinion. It’s captured the hearts, minds and tastebuds of critics and judges around the world, and to quote an enraptured Jim Murray: “…not sure if the distiller at the time was playing with some high propane yeast which just explodes with fruit, there is a richness to this malt that really does deserve applause…never before seen spice quite like it, or such a sublime balance with the fruity malt…”

Maturation: Triple matured for a minimum of 12 years in a combination of ex-bourbon, recharred and refill casks.

Loch Lomond is one of Scotland’s most famous and beautiful landmarks and delineates the boundary between the Lowlands and Highlands. The area’s been at the heart of the whisky industry for centuries but sadly at least nine distilleries around the Loch have been lost over the years, leaving Loch Lomond Distillery to carry the flag into the 21st century.

Loch Lomond Distillery’s story began way back in 1772 with the founding of Littlemill, Scotland’s oldest, albeit now closed distillery. Littlemill changed hands several times over the centuries before it was acquired in the 1930s by an American called Duncan Thomas. One of the great innovators of the industry (read more about his approach to whisky making below), he lived in the former exciseman’s house at Littlemill and built the new Loch Lomond Distillery in 1963.

Inspired by the 1960s whisky boom, he established Loch Lomond in partnership with Chicago-based Barton Brands who subsequently bought him out in 1971, but later closed the distillery in 1984 when boom turned to bust. Scottish outfit Inver House acquired it before quickly passing Loch Lomond on to Glen Catrine Bonded Warehouse Ltd in 1986. Glen Catrine is not your average whisky company; operating as the bottling and ageing arm of Bulloch & Co, a well-established blending and retail firm, it specialised in private label and bulk whisky export, marketing a variety of blended whiskies, vodkas and gins. The purchase of Loch Lomond meant that they now had the resources to produce spirit, and Loch Lomond rapidly, but quietly, grew to become the most flexible and arguably the most innovative distillery in Scotland, its operations never widely reported or understood thanks to specialisation in the private label and export business.

During this time Glen Catrine also bought Littlemill Distillery and Glen Scotia Distillery, all of which were neatly bundled together and sold to private equity firm Exponent in 2014. The new structure, Loch Lomond Group, is a totally integrated business with both grain and malt facilities, a bottling hall and two of the UK’s top selling brands; High Commissioner Blended Whisky and Glen’s Vodka. Headed by an A-list cast of professionals from industry leaders Diageo including former Diageo CFO Nick Rose and former CFO for Diageo’s global supply business Richard Miles, along with CEO Colin Matthews, who led Imperial Tobacco’s businesses in Africa, the Middle East, and the Indian sub-continent, they mean business. Since taking over, the distillery’s range has seen a major overhaul including rebranding and repackaging, and most importantly for whisky lovers around the world, a very strong focus on malt whisky. Previously limited mainly to independent bottlings, Loch Lomond single malt is finally getting its turn in the sun.