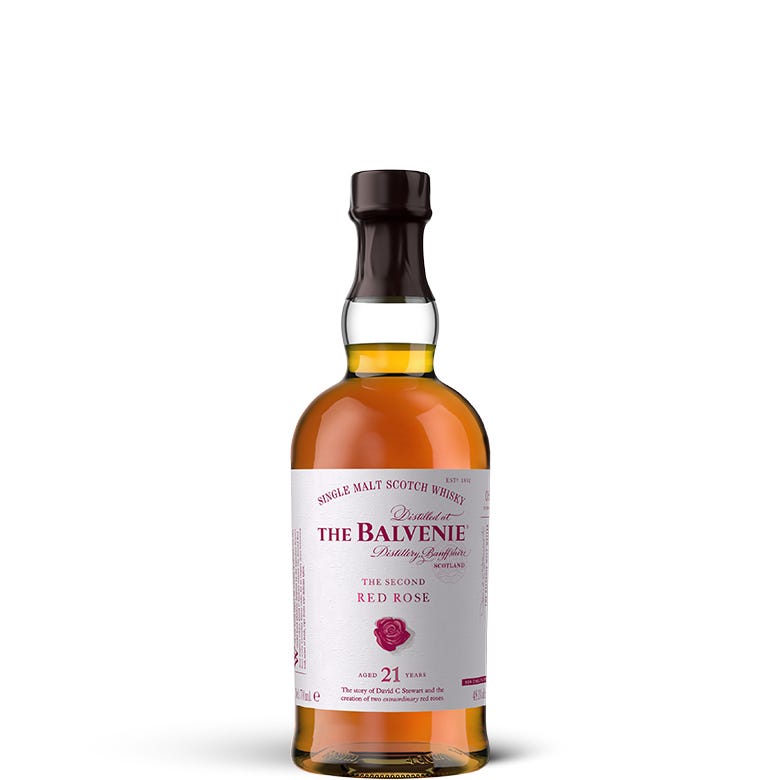 The Balvenie The Second Red Rose

Get ready to experience The Balvenie as you’ve never tried it before. The first time the pioneers of cask finishing have ever used Red Wine casks, The Second Red Rose has been finished in none-other than Australian Shiraz casks.

In 2008, The Balvenie dropped The First Red Rose, which was not only an amazing whisky encapsulating the Red Rose story but also a hit with collectors, with bottles now fetching upwards of $4,500 at auctions. It was a liquid of such intriguing colour and taste that it would become the talk of Dufftown for many years to come. It’s story, and the one of its successor, The Second Red Rose, began many centuries ago in a castle high on a Speyside Hill…

Margaret Douglas, a widow, lived in Balvenie Castle for many years. Her rent payable to King James took the form of one exquisite red rose. This red rose, so the story goes, had a magenta hue, and was considered not only to be extremely beautiful, but very valuable too.

Centuries later, with the Balvenie distillery on the edge of the land from the Balvenie Castle, the tale of the rare red flower lives on. Says Malt Master David Stewart: “The aim was to create a deeply vibrant whisky, to evoke the flower in question. That’s where it all began. It all came together beautifully, the significance of the rose, the colour, wanting the story to come to life”.

While The First Red Rose used Port pipe casks to create that red tinge in the whisky, in a history-making first for the distillery The Second Red Rose is finished in Red Wine casks. But not just any old casks; in an unprecedented move, they’ve used Australian Shiraz casks, giving a distinctive blush to the 21 Year Old whisky, and a sweetly vibrant, rounded depth of flavour.

The nose is gentle but really blossoms, opening to reveal intense ripe fruits, fresh mango and subtle oak. The palate gives an initial burst of blackberry and ripe peach sweetness amongst gentle woody spice, before the decadently long lingering finish takes over with summer fruits and soft indulgent oak.

It's liquid luxury in a glass and epitomises why Balvenie has become one of the highest awarded and sought-after single malts on the planet; one to “go straight to the pool room” to be saved for a special moment.

Orders for The Balvenie The Second Red Rose have now closed. Sign Up free now to get your hands on our upcoming releases.

Having spent his younger years learning the trade at Mortlach Distillery, Grant dreamed of one day running his own distillery. Through endeavour and thrift, he saved sufficient money to realise his dream, and in 1886 Grant and his nine children laid the first stone of the Glenfiddich Distillery in his native Dufftown.

The late 1800s was boom time for Scotch whisky and several other distilleries were moving into the Speyside region, which soon became the biggest whisky producing region of Scotland. Grant was convinced this would threaten Glenfiddich’s water source. In response to this threat, and with the intention to build a new distillery, Grant purchased the neighbouring Balvenie House and its outbuildings, and the surrounding 12 acres of land comprising of a strong water catchment area with abundant springs. He acquired second-hand stills from Lagavulin and Glen Albyn and the first distillation took place on 1 May 1893. The distillery was originally named Glen Gordon, after the ruined castle that was repurposed into maltings.

The whisky was an immediate hit with the blenders, and Balvenie promptly found a place in Grant’s own range of blended whiskies, particularly the Standfast blend. They must have been doing something right because today at 4,400,000 cases per annum, Grant’s is the fourth biggest selling Scotch whisky in the world.

It’s hard to stress the importance of the effect that William Grant & Sons had, and continue to have, on the industry. The 1960s and 1970s were difficult times for the industry with many small, independent distillers going out of business. In order to survive, William Grant & Sons expanded their production by adding five new stills, bringing the count to nine, and innovated by introducing advertising campaigns and a visitors’ centre. During this period, they also began marketing single malt as a premium brand in its own right, effectively creating the modern single malt whisky category, with The Balvenie single malt being released in 1973.

More than doubling the number of stills of course drastically increased the amount of malt needed, and to that end, their malting floors could no longer provide enough, and they had to start buying malt in. Nowadays, around 15% of the malt Balvenie use is produced on their own floors. Even with nine stills, producing whisky for both single malt and blends meant the distillery was running flat out, with mild relief finally arriving with 1990’s opening of Kininvie, and then finally when the eight-still Ailsa Bay was built in 2007, The Balvenie distillery could at last concentrate on single malt.

In 1993 the distillery celebrated its centenary with the introduction of three expressions that form the foundation of The Balvenie: Founder’s Reserve 10 Year Old, Double Wood 12 Year Old and Single Barrel 15 Year Old.

Today, The Balvenie is the eighth biggest selling single malt brand in the world, producing some 5,600,000 litres of alcohol a year through its five wash stills and six spirit stills., while its older brother Glenfiddich dominates the top spot. The stills are, of course, one of the most important players in the character of a whisky, and The Balvenie’s still design differs little from day one, featuring the ‘Balvenie Ball’ - a large bulge or boil ball at the bottom of the swan’s neck that gives the vapours time to mix before moving up the still. These are also the inspiration for the shape of the neck of Balvenie’s bottles. The result is a new make that’s sweet with a real honey note to it, and somewhat different to that of Glenfiddich and Kininvie. That being said, Ailsa Bay distillery has exactly the same design for its stills, and its spirit is different again.

Despite its success, little has changed at Balvenie Distillery over the years. Uniquely, it still employs all the traditional crafts of malt whisky making, which they call the ‘Five Rare Crafts’. Nowhere else will you find a distillery that still grows barley on its own 1,000-acre farm, malts it on a traditional malting floor, has its own coppersmith to tend the stills, a cooperage to maintain the casks and the longest serving Malt Master in the Scotch Whisky industry, David C. Stewart. By owning all the steps of the process, the distillery’s been able to keep a very tight control on quality, thereby protecting the brand’s reputation and remaining loyal to its followers by producing consistently marvellous whisky.

David C. Stewart is a living legend and deserves a few words. Born in Ayr on the west coast of Scotland in 1945, he joined William Grant & Sons at the tender age of 17 in 1962, the year before Single Malt Scotch Whisky was first officially exported to England. He became Balvenie’s fourth Malt Master in 1974, and his renowned ability to identify the finest casks of whisky for maturation has helped William Grant & Sons earn the Distiller of the Year accolade an unprecedented eight times.

The Balvenie Aged Thirty Years was launched to celebrate his 30 years as Malt Master in 2004, and in 2016 he was awarded an MBE for services to the Scotch Whisky Industry by Queen Elizabeth II.

A keen innovator, it was in 1983 that he started experimenting with maturing whisky in two different cask types in sequence. The result? The Balvenie Classic, the first whisky with what is now known as a wood finish, or cask finish. Released with both 12 and 18 Year age statements, it was replaced in 1993 by the 12 Year Old DoubleWood, which is still on sale today.

Cask finishing is the order of the day for Balvenie’s core range, with the 12 Year Old (and now discontinued 17 Year Old) DoubleWood joined by the 14 Year Old Caribbean Cask (rum cask finish), and 21 Year Old Portwood. Of course, there’s a range of single barrels and small batch releases from Tun 1401 and Tun 1509, a Travel Retail range including a number of triple cask whiskies, a number of older age releases including 25, 30, 40 and 50 Year Olds. The David C. Stewart Compendium, which is a collection of extremely rare single casks, selected by David himself, was introduced in 2015. Divided into five chapters of five expressions, it serves as a memoir of his contribution to the Balvenie’s history. The Stories range was introduced In 2019 “celebrating stories of character, craft and human endeavour”, and in 2021 the Rare Marriages range was launched to pay tribute to “David’s dedication to designing and building exceptional flavour, through the marriage of rare casks”. 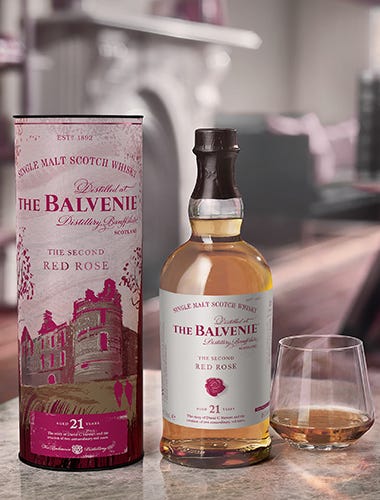 Water Source: 21 springs in the Conval Hills surrounding the distillery