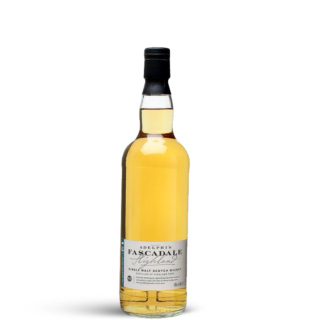 Food Match Seafood such as cured salmon, white fish or for a truly indigent treat, drizzle a little Fascadale over a freshly shucked oyster

Fascadale lies on the north-west point of the rugged, and timeless, Ardnamurchan peninsula, just a few miles from the location for Adelphi’s new distillery – The Ardnamurchan Distillery – which recently opened in July 2014. Fascadale’s hidden, pebbled beach looks West and North towards the islands of Eigg, Rum, Muck and Skye and whispered tales of smuggling abound…

Fascadale Batch no. 6 is a special marrying of 5 American oak, ex-Bourbon hogsheads from the famous Highland distillery of Clynelish. It highlights the best of the coastal Highlands.

The Adelphi Distillery was established in 1826 on the south bank of the River Clyde in the heart of Glasgow. By the 1880’s, under the stewardship of Archibald Walker, it had become, quite possibly, the most technically advanced distillery in Scotland – 5 steam engines, 9 washbacks, 510,000 gallons of whisky per annum, it’s own bottling hall, and both rail and sea to speed the bottle to the glass. It’s malt was considered one of the best from any region. The distillery closed after a major disaster in 1906 although many of the buildings remained until the early 1970’s. In 1993, Walker’s great-grandson, Jamie, revived the Adelphi name as an independent bottler. Jamie was determined not to sacrifice quality for volume, and he was equally adamant that this should be continued when he sold the company in 2004.

Remaining completely independent, Adelphi is able to select it’s whiskies from all the distilleries. The majority of Adelphi’s whiskies are bottled as single casks, direct from the cask at natural strength, colour and unchill-filtered. Each single cask matures it’s precious contents very differently, and as a result, there are never two Adelphis quite the same. No matter whether the cask has come from a famous distillery or a lesser-known name, these unique whiskies have married exceptionally well with the wood. Adelphi employs a specialist nosing team, chaired by Whisky guru, Charles MacLean, to seek out these truly special casks – so rare that on average, Adelphi accepts a mere 4% of the whiskies that it is offered. Adelphi’s strict selection criteria is unique in the industry and ensures that any whisky bottled by Adelphi will be exciting, full of flavour, texture, well balanced and long-lasting.

Adelphi also has a blended Scotch whisky, the “Private Stock”, and 3 limited edition single malts (multi-cask), the “Fascadale”, “Laudale” and Liddesdale – these single malts are the product of vatting between 2 and 10 single casks (that have been selected as single casks) and bottling unchill-filtered at 46% vol.

With the change of ownership in 2004, Adelphi’s headquarters moved from Edinburgh to the spectacular Glenborrodale Castle on the remote Ardnamurchan Peninsular in North West Scotland, www.glenborrodalecastle.com, and in 2011 the company completed their own warehousing facility in Fife to handle all bottling, packaging and storage solutions. Adelphi now bottles all it’s own single casks and ships, on strict allocation, to discerning customers around the world. At the same time, Adelphi commissioned a feasibility study into the construction of it’s own, brand new distillery in Ardnamurchan. While there is no history of legal distillation in the area, the climate makes it one of the best places in the world for long term maturation of whisky. In addition, Adelphi is pioneering the use of 100% biomass steam heating for it’s plant, with locally sourced wood chips from sustainable forestry.

The distillery will come online in July 2014, and will aim to produce up to 475,000 lpa. All the barley will be grown in Scotland, the majority coming from the farm surrounding Adelphi’s warehouse in Fife, and as much as possible will be malted at the distillery. The casked whisky will remain in Adelphi’s own maturation warehouses set into the hillside in Ardnamurchan, eventually returning to Fife to be bottled. The distillery will also boast a visitor centre, where guests can tour the plant, enjoy a dram and see Ardnamurchan in all its beauty.