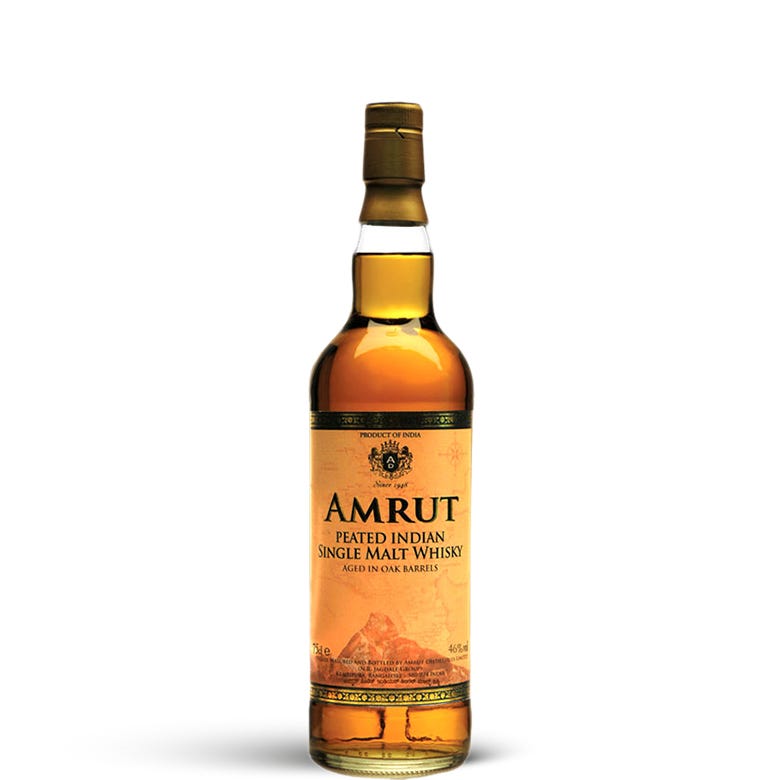 We swapped the Scottish Highlands for the Himalayan foothills to sample Amrut Peated Indian Single Malt, one of the best peated whiskies we’ve tasted yet.

Nose Golden yellow Nose: Unusually dry peat; comforting worn leather, akin to an old armchair; a hint of citrus and a touch of caramel too.

Palate Candied orange and powerful fruit notes. Becomes that little bit drier and spicier, with coffee and vanilla mingling with a butterscotch that continues throughout.

Finish Deep, long, clear finish with the peat reappearing wrapped in butterscotch and vanilla for an impressive finale.

Food Match Perfect with Gouda, Brie or Monterey Jack cheeses. These compliment the vanilla, maple and smoked wood characteristics allowing some sweeter notes to come to the fore.

An Indian Single Malt Whisky, peated to a phenol level of 24ppm and bottled at 46%, non-chill filtered.

As the Indian climate is too tropical for peat to develop, Amrut reached out to a Scottish malting company in Aberdeenshire to produce a peated barley to their specification using mainland peat, which has a distinctive smokiness. For the rest of their portfolio, made up mainly of un-peated malts, Amrut uses Indian barley grown in the foothills of the Himalayas.

This dry grain then crosses the seas to arrive at Amrut Distillery in Bangalore, India, where it is mashed, brewed, distilled and decanted into first-fill and re-fill ex-bourbon American Oak barrels to mature.

As Bangalore sits at an altitude of 3,000ft above sea level, with distinct wet and dry seasons and a high average temperature; this combination of factors causes the maturation of whisky to occur at a much faster rate – Amrut Master Blender, Surinder Kumar, estimates that one year of barrel-ageing in India is equivalent to three years of ageing in Scotland. Guided by this, Amrut’s Single Malt Peated reaches its peak quality by 5 years when it is bottled at 46%ABV and not chill-filtered, to capture the best characteristics and maintain the luscious nose and distinctive toasted element with a spicy edge on the palate.

As the first single malt whisky to be made in India, the history of Amrut Distilleries is as old as the history of independent India itself. The founders of the Amrut Distillery chose their name from an ancient Indian legend that tells of Angels who sought to produce a drink that confers immortality. According to Indian Mythology, when Gods and Rakshasas – the demons – churned the oceans using the mountain Meru as churner, a golden pot sprang out containing the Elixir of Life, called the “Amrut”. With drinks that offer lasting pleasure, the founders thought it apt to name their distillery Amrut.

Amrut Distilleries Limited began in 1948 under the name and style of Amrut Laboratories, led by Shri J.N. Radhakrishna Rao Jagdale (J.N.R.) and has since been under the leadership of successive generations of the Jagdale family, who aim to supply quality and value, and who honour substance over form. Since inception, Amrut Distilleries has made broad strides to establish itself as a significant, and for many, the preferred supplier of Indian-made liquor.

After the passing of J.N.R. in 1976, the mantle moved to Shri Neelakanta Rao, who built on the solid foundation laid by his father. His stewardship has seen Amrut Distilleries blossom into a multi-national brand prized for the superlative quality of its products.

Probably the most telling thing about this remarkable distillery’s commitment to making world class whisky was the daring 2005 launch of their single malt whisky in Scotland – Neelakanta Jagdale maintained that “…if our product had to pass the test, why not do so in the toughest location? Scotland is the home of Scotch. If they acknowledge our single malt, then that’s good enough for me”. Such is the quality of Amrut’s malts that even the most ardent of Scots was easily persuaded once a dram had passed their lips and so, much in the same way as with the Japanese many years before, Scotland gave the nod of approval to the unlikely newcomers.

Five years later Amrut gained the top level recognition that propelled it into the “big league” of single malt whisky when Jim Murray named their “Fusion” brand the third best whisky in the world in his 2010 Whisky Bible. Amrut had arrived, and with a healthy demand for single malts around the world there was no looking back!

Amrut Single Malt Whisky is a product of many years of research to produce whiskies that match world standards, and now showcases a portfolio of 11 single malt whiskies, appreciated by connoisseurs across the world.

In an effort to ensure Amrut Distilleries delivers on it’s present status as a noteworthy international player, the company has taken on board external talent in substantial numbers – with more than a thousand-strong workforce of professionals and skilled staff working diligently to bring a small piece of India to you at home.

Water Source: A countryside well, 24 km from the Distillery, in an area owned by Amrut