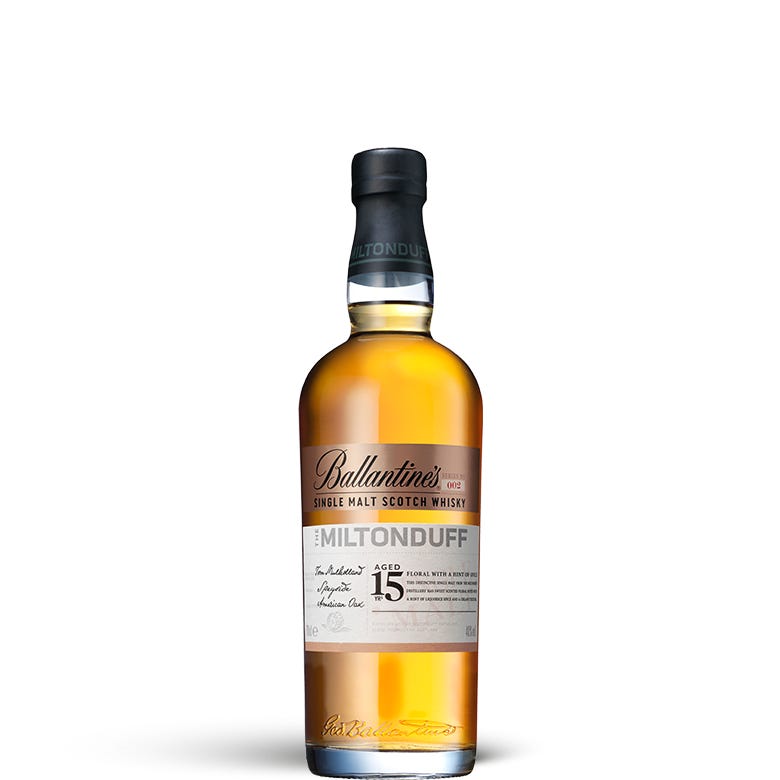 We made whisky history in October 2017 with the extraordinary single malt release that no one saw coming from one of the world’s biggest powerhouses of Scotch.

Over the last 190 years, Ballantine’s has grown into a brand synonymous with Scotch, just as Hoover is to vacuum cleaners, or Xerox to copiers. Unsurprisingly, it now ranks as the second biggest selling Scotch whisky in the world. So how do you go from what was once a small grocery store to one of the world’s greatest whisky brands?

19-year-old George Ballantine established his store in Edinburgh back in 1827, and as was customary in those days he began to sell his own blend of whisky. His blend proved so popular that over time he enlisted the services of his three sons to help meet demand and so George Ballantine & Son’s blend came to be. George Sr. passed away in 1891 leaving his son George II at the helm, overseeing continued growth that culminated in a prestigious Royal Warrant from Queen Victoria after her 1895 regal visit to Glasgow.

In 1910, Ballantine’s Finest was first blended. Later, the iconic square bottle was brought in to allow easy concealment of bottles in briefcases during prohibition in the USA. The blend remains the global flagship to this day, with global sales approaching 200,000 bottles per day. Yep, per day. Just let that sink in for a moment.

George II sold the business to Barclay and McKinlay in 1919, who in turn sold to Canadian firm Hiram Walker – Gooderham & Worsts in 1935. At the same time, Hiram Walker also purchased several distilleries to supply the blend, among them Glenburgie and most importantly The Miltonduff, which continues to be the foundation of Ballantine’s now. In 1936, the massive Dumbarton complex was built to house what was at the time the largest grain distillery in Europe. Growth continued unabated, entering Europe in the 1960s where it reigned supreme as the number one Scotch whisky for many decades. Hiram Walker was taken over by Allied Domecq in the 1988, with current owners Pernod Ricard taking over in 2005.

Ballantine’s core range includes: the Finest blend, produced from the original 1910 recipe; the creamy and sweet 12 Years; the smoky, spicy Hard Fired; and the lime-infused Brasil. But all the usuals aside, they’ve now come to their senses and decided to showcase the blend’s signature malts on their own, in the biggest surprise launch that no one saw coming…

The Miltonduff is one of Scotland’s hidden work horse distilleries, having spent the vast majority of its life producing malt whisky for blenders. For the past century it’s provided all the warmth and power as the foundation for Ballantine’s, but being the key ingredient for such a major blend means the Master Blender becomes very protective over his stock and The Miltonduff rarely sees the light of day as a single malt!

This month of course that’s all about to change as Ballantine’s launches their first ever single malt series to showcase The Miltonduff 15 Year Old, alongside the two other ‘signature’ hidden distilleries behind the blend. In addition to its foundation malt, The Miltonduff 15 YO, they’re also revealing the Glenburgie 15 YO, which delivers Ballantine’s concentrated fruitiness and honeyed sweetness, and the Glentauchers 15 YO, which provides the floral heather finish.

Lucky for you, The Miltonduff 15 Year Old is a Whisky Club Exclusive, only available to our Members, not available anywhere else in Australia and with extremely limited distribution globally, but the good news if you want to collect all three is you can also pick up the Glenburgie at Dan Murphy’s and the Glentauchers at Duty Free. After all, you’re already one of a privileged few to have The Miltonduff, so why not complete your Ballantine’s single malt collection while you’re at it?

Ballantine’s The Miltonduff 15 Year Old itself showcases The Miltonduff in all its glory, pure and unadulterated, the way we like it! Aged 15 years, this is a true Speyside; smooth, creamy and floral but also with a hint of cloves and cinnamon spice, lots of liquorice and a beautiful long, luscious finish. Quite simply, it’s one of Scotland’s biggest hidden gems by far and is hands down our coolest dram yet. Enjoy!

Located just a stone’s throw from in Elgin, The Miltonduff Distillery sits in the barley-rich pastures of the Glen of Pluscarden, which if you love whisky would have been a surprisingly thrilling place to have been back in the early 1800s when it was home to as many as 50 illicit stills. If we wind the clock back even further than that, it was the site of the meal mill of the nearby Pluscarden Abbey, founded in 1236 by Benedictine monks. They’ve even kept a stone from the original Abbey at the distillery in its honour.

The distillery operated illicitly from the turn of the 1800s until the Excise Act in 1824 legalised whisky production and the distillery finally became a legitimate business, founded by Andrew Peary and Robert Bain and given the name The Miltonduff – named after Milton Farm where the distillery was located, and the Duff family who owned the surrounding lands.

Ownership changed hands several times over the years, most notably when Thomas Yool & Co became a shareholder in 1895. The new funds he injected into the business meant the distillery could undergo major expansion – and not a moment too soon given the whisky boom that was hitting Scotland at the time. Yool took control and full ownership a few years later and by the end of the century The Miltonduff was one of the largest whisky producers in Scotland, pumping the good stuff out at a rate of more than one million litres per year.

The distillery was soon to catch the eye – or tastebuds – of investors with even deeper pockets however. Canada’s largest distiller Hiram Walker – Gooderham & Worts had made huge profits smuggling alcohol into the USA during Prohibition and were looking to expand into Scotland. They acquired George Ballantine and Son Ltd in 1935 then quickly started to look around for a stable supply of quality Scotch to fulfil ever-growing demand. Miltonduff caught their eye, and virtually all the distillery's production from thereon in went to supply whisky for Ballantine’s blends, with only the odd standalone release.

The Miltonduff was one of the only Speyside distilleries to use triple distillation, and in 1964 they added another distilling innovation to their whisky bow when a pair of Lomond stills was installed to make their new Mosstowie brand of whisky. As you may remember from our whiskies past, Lomond stills represented the first real innovation in still design for around 100 years. They’re used for batch distillation just like a regular pot still, but can also control reflux through the apparatus similarly to coffey stills, by way of three perforated plates that could be cooled independently. Crucially, this adaptable design allowed different styles of whisky to be made all in the one still.

Further upgrades to the distillery in 1974 saw production capacity increase to over 5 million litres per year, however incredibly this was still not enough Miltonduff for Ballantine’s needs, and combined with a low demand for Mosstowie, the Lomond Stills were removed in 1981 to make way for additional pot stills to allow them to focus purely on increased whisky production.

The final sequence of ownership played out over the last 30 years, with Allied Lyons, having bought most of the stocks in Hiram Walker during 1986, purchasing the group outright in 1987. Allied Lyons merged with Pedro Domecq and was then acquired by Chivas Brothers’ parent company Pernod Ricard, who took over the distillery in 2005.

Single malt distillery bottlings from The Miltonduff have been very few and far between, with 10 and 12 years old releases in the 1970s through 1990s, along with a number of independent bottlers’ releases of 10, 15 and 22 years old expressions. Miltonduff also appeared in the Caledonian Malts line-up in 1991. A 15 Year Old was released in a series alongside other Ballantine's Malts Glenburgie and Glentauchers in 2017.

With a production capacity now standing at 5.9 million litres, The Miltonduff was Allied Distillers’ largest distillery, and remains one of Pernod Ricard’s biggest, with production figures only bettered by Glenlivet. The distillery consists of six pot stills – three wash stills at 18,000 litres capacity each, and three spirit stills at 17,500 litres each. Water is supplied from the nearby Black Burn, which freely flows from springs just near the old Abbey, and the malt is from local Speyside sources.