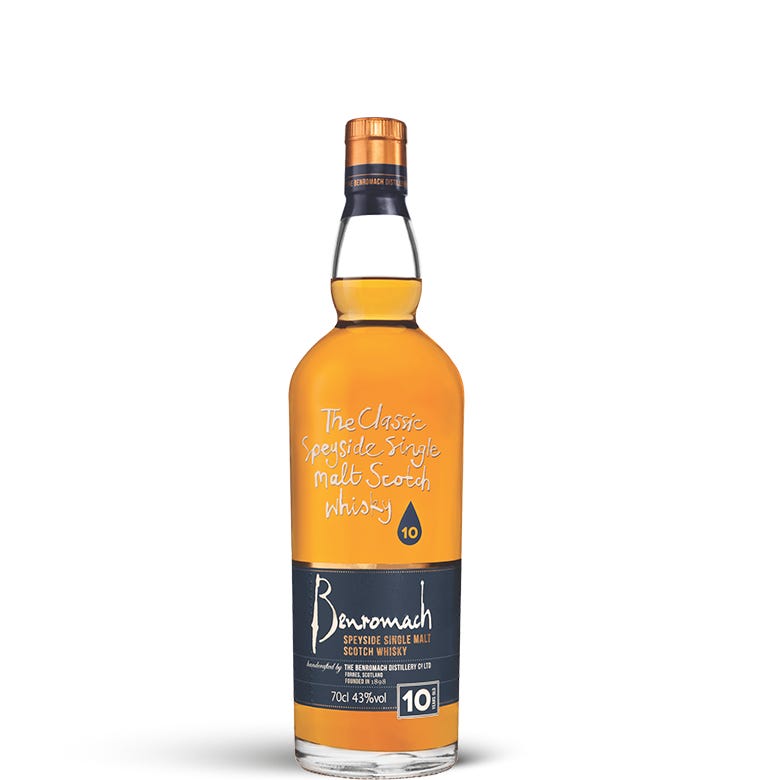 We made a strong start to 2015 with the classic 1960’s style lightly peated Benromach 10 Year Old.

Nose A rich Sherry influence with fruit and nut chocolate and delicate spice. With water, a digestive biscuit note and perhaps you will find some exotic fruits.

Palate Delicious forest fruits such as raspberries and brambles, a Sherry malty creaminess with peat flavours emerging. With water, a mouth coating experience with toasted malt followed by a lingering Sherry flavour

Today, this truly unique distillery is run as if in a time warp, where a team of three carefully craft a pre-60s style of Scotch whisky with the minimal use of modern tools. The small scale of the distillery means that everything can be done by hand, and they joke that the only computer in the distillery is one used for emails, so much so that there are no temperature or pressure gauges on the stills. Everything is down to the stillman’s skills. The old-time processes mean slower fermentations using a combination of brewer’s and distiller’s yeast for bigger, maltier flavours, slower distillations to capture the sweetest part of the run, and a focus on local ingredients. Benromach only uses barley grown in their home county of Morayshire and spring water from the nearby Romach Hills. Only first fill casks are used for maturation, and all it’s sherry casks have spent at least three years in a Spanish bodega before being shipped to the UK for bottling and consumption, meaning that the sherry was actually used as drinking sherry (therefore of a higher quality) and not simply dumped after seasoning the cask for whisky maturation.

Other than it’s few heavily peated varieties, the bulk of Benromach whiskies are slightly peated to 12ppm and the malting is done locally by Crisp Maltings. This is key to Benromach’s pre-1960s style because all Scotch whisky was at least very lightly peat-smoked in that era as peat was a staple fuel. This changed in recent times as peat and even coal to a large extent have been replaced by electricity and gas, paving the way for the non-peated whiskies now available on the market.

If you have a few minutes you can click here to watch a most touching film about the distillery and the passion of those behind it. Best enjoyed with a dram in hand!

Maturation: For each distillation batch, 80% is filled into Bourbon casks and 20% into Sherry hogsheads and matured for nine years. For the tenth year they are married back together in first-fill Oloroso Sherry casks. To add complexity and substance at a young age is

Benromach’s is the story of a true craft distillery. The smallest of Speyside’s 50-odd distilleries, Benromach was established in 1898 in the midst of a whisky boom and fell victim to bust in the Pattison Whisky Crisis two years later in 1900, along with The Benriach we featured last month. It was later acquired in 1911 by Harvey McNair & Co who ran it until the onset of the First World War. Shortly after the war it was revived by a new company, the Benromach Distillery Ltd. This continued until 1925, when things stood still again, before reopening in 1937 under the ownership of Associated Scottish Distilleries Ltd. Eventually Benromach was purchased in 1953 by DCL, who then rebuilt the distillery in the 1960s and again in 1970s – though this didn’t save Benromach from closing yet again in 1983 alongside many others, including Port Ellen.

Fortunately hope was on the horizon for our beleaguered distillery because it had been a long-standing ambition of family owned independent bottler Gordon & MacPhail to manage a distillery of their own and this dream became a reality in 1993 when G&M purchased Benromach Distillery. At the time the distillery was virtually derelict, with all the fixtures and fittings having been ripped out and sold by the previous owners, but undaunted, and drawing upon generations of expertise in the whisky industry, Benromach was carefully and painstakingly re-equipped to recommence operation before it was officially reopened by HRH Prince Charles in 1998. Along with the distillery, G&M also purchased the remaining casks of old Benromach, mostly from Diageo (which had grown from DCL) and this allowed G&M to recreate the pre 60s style of whisky that Benromach is now well known for.

With the turbulence endured, and now under the direction of an experienced and caring family, the future looks bright.