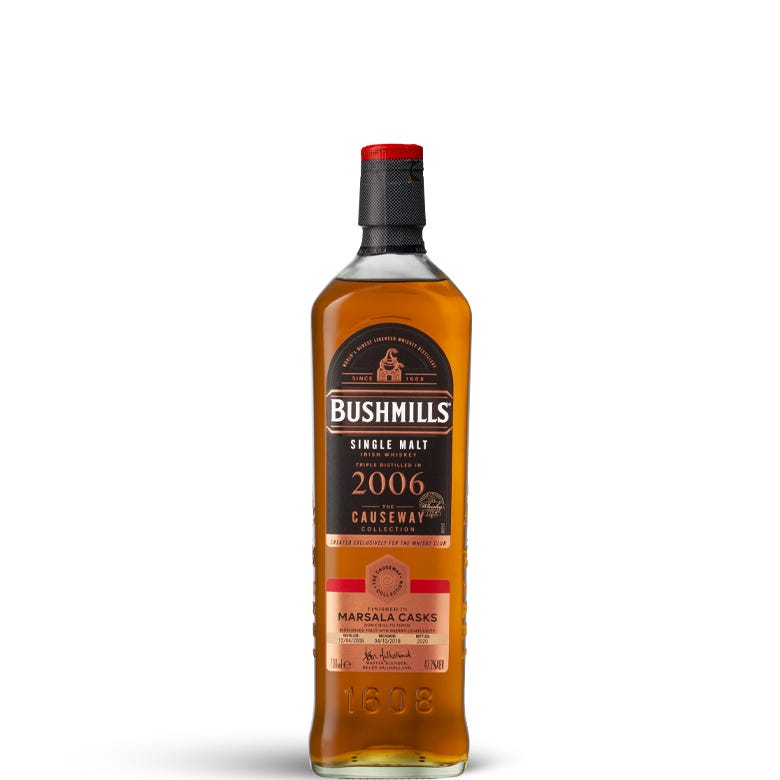 Whisky Exclusives don’t get much bigger or more delicious than this. Taste the “real” Bushmills direct from the world’s oldest distillery to your doorstep, with our global-first release of the higher ABV, non-chill filtered, non-coloured, triple wood matured new Causeway Collection.

Made by multi-award winning Master Blender Helen Mulholland, it was distilled in 2006 and matured in Oloroso Sherry and Bourbon casks, before finishing in fresh Marsala wine casks for enhanced complexity and sweetness. From first to last sip it’s a malt masterpiece, cut at Helen’s preferred 47.2% ABV, full bodied, velvety smooth and with all the goods…

In Helen’s own words: “With over 400 years of whiskey-making heritage, Bushmills has never compromised on quality to create its signature smooth taste and famous house style. The global launch of The Causeway Collection represents a bold new step for us, an exciting time to share rare cask finished editions”.

Needless to say, this never to be repeated World Exclusive will be snapped up fast with limited new Member places remaining for the month. Once you’re in, you’ll also enjoy an exclusive virtual tasting with Helen, and you’ll be in the draw to win the ultimate Bushmills collection including a money-can’t-buy ‘hand-fill’ from her personal collection!

Maturation: Matured in Oloroso Sherry and Bourbon casks then finished in Marsala casks.

Whiskey making has long been an Irish tradition, with monks known to have been distilling it as far back as the 11th Century. In fact, Ireland is believed to be the birthplace of whisk(e)y itself, the name coming from the Irish word ‘uisce’, meaning water. The spirit was often referred to as ‘uisce-breatha’, or ‘water of life’ (the Scottish equivalent is uisge-beatha). So now you know.

The world’s oldest licensed whiskey distillery, Old Bushmills Distillery sits by Saint Columb’s Rill, a tributary of the River Bush. The river is lined with a number of mills, and it is from this that the village takes its name. Today, much of the population work at the distillery, as the experience and knowledge of the craft has been passed down from generation to generation. As they say, “without the village there would be no whiskey, and without the whiskey there would be no village”.

The story of whiskey production in Bushmills goes back, officially at least, to 1608 when King James I granted the first licence to distil in the area of the River Bush to Thomas Phillips. But rumour has it, Thomas wasn’t the first to make whiskey there - it’s believed whiskey had been produced in the area illegally as far back as the 13th century, with tales of Sir Robert Savage of Ards, ground landlord of Bushmills, fortifying his troops before battle with “a mighty drop of aqua vitae’, before battling the Irish in 1276.

What we do know for sure though is that the Bushmills Distillery was finally officially founded by Hugh Anderson in 1784 with the building of a new distillery in the village with the capacity to turn out 10,000 gallons a year.

It wasn’t easy going though, with many a lean year at Bushmills, the distillery being closed down several times due to a lack of demand. Records show no sign at all of operations in 1802 and 1822, but thankfully, if not miraculously, the business stayed afloat.

A further blow to the industry came in the 1850s, when the Crown decided to tax Irish distillers by placing a tax on barley. This tax changed Irish whiskey forever, as virtually all Irish distilleries took the cheaper option of using corn and other grains in place of barley. Little has changed, with some of the biggest names in Irish blended whiskey today still using corn. Despite the increased costs, Bushmills resisted the change, sticking to its guns and continued using malted barley exclusively. Even today, it's the only Irish distillery to be using malted barley in all its whiskeys.

Belfast spirit merchant Jame McColgan and Patrick Corrigan took over in 1860, subsequently forming a limited company, The Bushmills Old Distillery Co. Ltd. in 1880. Production had increased to 100,000 gallons a year; however, all this came to a grinding halt in 1885 when the distillery was destroyed in a fire (distillery fires were not an uncommon occurrence back in the day). Onwards and upwards though, and Bushmills Distillery was soon rebuilt, bigger and better than ever, and ready to supply the ever-increasing U.S. demand, as short lived as that was to be, at least.

Things were starting to look good for Bushmills – it won the only gold medal for whiskey at the Paris 1889 Expo, and in 1890 commenced operating its own steamship, the SS Bushmills, which travelled across the Atlantic to deliver its payload of Bushmills to America, stopping at Philadelphia and New York city, then heading to Asia with stops in Singapore, Hong Kong, Shanghai and Yokohama.

Despite this, the company went into liquidation in 1895, but bounced back only to be hit by another downturn in the 1920s, thanks to Prohibition in the U.S. Another Belfast wine and spirits merchant, Samuel Wilson Boyd, bought Bushmills in 1923. An astute businessman, he realised Prohibition wouldn’t last forever, and did what he could to keep production going. A good move, and the moment Prohibition was repealed in 1933 he had the biggest shipment of whiskey yet on the boat to American shores. A daring move that paid big dividends, thrusting Bushmills into a period of strong growth and expansion, including the acquisition of Coleraine and Killowen distilleries in 1936.

Sadly, many other Irish distilleries didn’t have such foresight. At the beginning of the 20th century there were 37 distilleries in Ireland. Only three of them – Bushmills, Cooley and Midleton – survived.

Just as things were looking up again for Old Bushmills Distillery, World War II struck, quite literally, with the distillery’s head office and warehouses in Belfast hit by German bombs reducing them to rubble. All the documentation, and a whole lot of whiskey was destroyed by the resulting fire. The remains of the Belfast buildings can still be seen in the Cathedral Quarter to this day. Despite the loss, Bushmills played its part in the war effort, slowing production to allow the billeting of American troops.

Following the war, it’s been smooth sailing for Old Bushmills Distillery, despite a number of ownerships changes, starting with the 1946 take-over by textile magnate Isaac Wolfson, who left the Boyd family to handle business-as-usual, but took Bushmills to a number of new markets around the world.

Charington cashed in, selling Bushmills to the Irish Distillers Company in 1972, a move which placed the entire Irish whiskey industry – Bushmills, Cooley and Midleton - under the control of the one parent company.

Pernod Ricard absorbed Irish Distillers Company in 1988, but they sold Bushmills to Diageo in 2005 for some £200 million. Considerable cash was also thrown about marketing the brand in an effort to regain market share. Scotch was really starting to boom, and Irish whiskey was suffering for it.

Late in 2014, Diageo did a deal with the Mexican spirit powerhouse Jose Cuervo to swap Old Bushmills Distillery for the remaining 50% share of the Don Julio tequila brand.

The latest big change at Bushmills is the construction of a new sister distillery, right next door. As they say, if it ain’t broke, don’t fix it, so the new distillery is a copy of the original, using the same still shapes and sizes, as well as production methods. It will allow production to be doubled, which will also mean more warehouses will be needed. Thus, a new 20,000-barrel warehouse is set to be opened every eight months. They’re not messing about here!

When a distillery’s been around as long as Old Bushmills Distillery has been, it’s hard not to become somewhat of a cultural icon. Since the skyrocketing exports of the 1950s and 60s, Bushmills has become entrenched in popular culture and the minds of the consumer. It’s been mentioned in music, movies, and TV, and the Bank of Ireland even featured an illustration of the distillery on a series of sterling banknotes, with Bushmills replacing the Queen’s University of Belfast.

Today the Old Bushmills Distillery is one of Irelands's must-see tourist attractions. Around 100,000 visitors a year take part in the usual guided tours and tastings. Additionally, there’s a narrow-gauge railway to take tour participants to the nearby Giant’s Causeway, a spectacular coastal geological feature of around 40,000 mostly hexagonal interlocking basalt columns formed by ancient volcanic activity.

While the majority of Irish whiskey is produced with a continuous column still (the majority using the Coffey still), Bushmills uses more traditional Scotch style copper pot stills. The main difference to the Scotch method of course being that Bushmills triple distil. Triple distillation results in the light, fruity, and smooth style of spirit that’s become synonymous with Irish whiskey.

Bushmills is the second biggest Irish Distillery, following Midleton. Water from St. Columb’s Rill is combined with malted barley in the stainless steel mashtun. The washbacks are also stainless steel, however the ten tall, slender-necked pot stills are all copper. The whole setup runs 24/7, is entirely computerised, and can be operated by one person alone.

Old Bushmills Distillery only produces Single Malt whiskey. Bushmills does, however, have blended whiskies in its range, and these are made by blending its own in-house spirit with grain whiskey brought in from Midleton Distillery.

The Causeway Collection is a curated range of limited-edition rare cask finished Irish single malts that takes its name and packaging design inspiration from the Giant’s Causeway. It was launched in 2020 with the Bushmills 2006 Marsala Cask at 47.8%, Created Exclusively for The Whisky Club and released much to the excitement of our Members. This whiskey was both a hit with everyone who bought a bottle, and also the auction sites, with bottles selling for up to AU$2500 just months after the release. 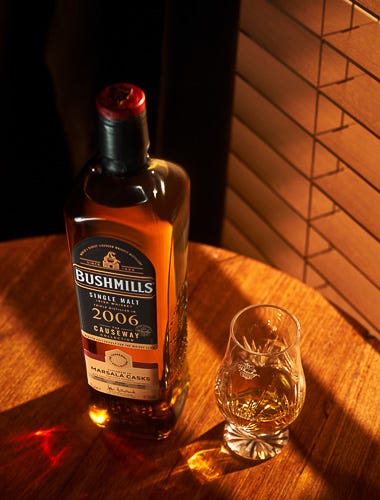 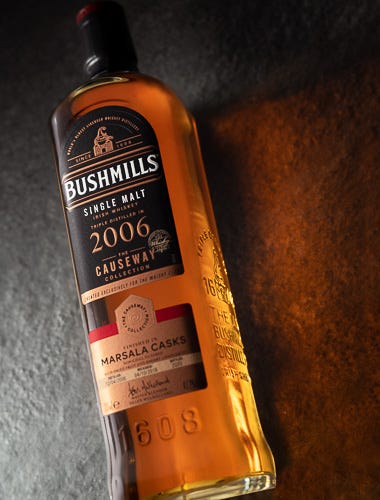