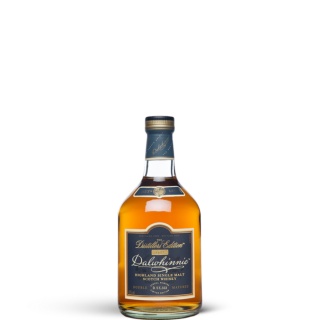 This hugely popular Australian exclusive, the 2016 Dalwhinnie Distillers Edition, was our May Malt...

Nose Terrific nose with fresh sherry embracing the famous malt and honeyed notes of Dalwhinnie. Heather, mint chocolate, baked apples and honey and a whiff of smoke. Spicy, yet grapey.

Palate Decadent spiciness followed by an impressive build-up of very clear, well defined barley malt. There’s a quick burst of honey then a rich, grape effect then moves in towards the middle.

As would be expected, Dalwhinnie’s location plays an integral role in shaping the whisky’s profile. In the first instance there’s the water, as Dalwhinnie holds the exclusive rights to draw from Lochan an Doire Uaine, a gathering of pure snowmelt and rainwater high in the Drumochter Hills. It’s the unmistakable quality and purity of this water that’s largely credited with maintaining Dalwhinnie’s very clean malty taste.

Next there’s the new make spirit. Dalwhinnie goes out of its way to create a heavy, sulphury new make. Embracing the classic method, the distillery uses clear worts and long ferments to create a light waxy background before running the stills in a way to stop copper conversation and using traditional worm tub condensers. This is helped along beautifully by the distillery’s chilly ambient temperature which means that the worms are naturally very cold and condense rapidly, to create that trademark heavy new make. The heaviness of the sulphur is such that it takes about 15 years in refill casks for Dalwhinnie to fully emerge, but as we all know, it’s well worth the wait.

The final ingredient of course is the signature hint of heather, credited to the heather that surrounds the distillery and most likely due to the presence of wild yeast during the fermentation stage.

With a capacity of 1.3 million liters of pure alcohol a year it’s a relatively small distillery, operating with only two stills, both a traditional shape with a large bulbous base and a very tall, gradually narrowing neck. Dalwhinnie is also one of the last remaining Scottish distilleries using wooden worm tubs. Malt is sourced from one of parent company Diageo’s malting sites and is very lightly peated, just enough to give it a hint of smoke. The best part of course is the two racked warehouses holding over 5000 casks of ageing whisky, a true sight to behold!

Our malt this month is the 2016 Dalwhinnie Distillers Edition. Introduced in 1997, the Distillers Edition series is an annual, double-matured, limited edition release of the Classic Malts; Dalwhinnie 15yo, Cragganmore 12yo, Lagavulin 16yo, Talisker 10yo, Glenkinchie 12yo, Oban 14yo and Coal Ila 12yo. Each Classic Malt is matched to a Spanish or Portuguese fortified wine chosen to complement the characteristics of that whisky and undergoes a second maturation in specially prepared casks that previously held that wine. The result is a range of sublime, deep flavoured single malt whiskies, each very much still a Classic Malt, yet also possessing a depth, complexity and nuance of flavour not found in the regular releases.

This Dalwhinnie Distillers Edition was distilled in 2000 and released in 2016 after undergoing an exclusive second maturation in Oloroso sherry casks, its fragrant grapey notes carefully chosen to complement the signature moorland peat and heather-honeyed notes of Dalwhinnie. You’ll find its nose is far more forward and assured than the regular 15yo and the palate is richer and sweeter. There’s a wonderful rich winey sweetness, spicy complexity and a nice drying, oaky finish. In fact, the Dalwhinnie Distillers Edition cask finish is one of the best double maturations on the market, as observed in Jim Murray’s 2017 Whisky Bible, “More like a blender’s edition: I can count the number of genuinely successful double matured malts probably on both hands. There is some serious skill and understanding of this distillery at work here.”

The resulting big, spicy, heathery well-defined malt, with tons of oak and vanilla is not to be missed and with just one batch of it produced the 2016 release will be another global sell out as usual soon. We’re delighted to present it exclusively in Australia for our members’ enjoyment this May.

Strathspey Distillery (later to become Dalwhinnie) was founded in 1897 by three intrepid entrepreneurs, John Grant, George Sellar and Alexander Mackenzie, who had high hopes of cashing in on the great whisky boom of the late 1800s when a lot of Scotland’s current distilleries were built. Their unique choice of location was a real case of you can’t have your cake and eat it, because although the location is ideal for whisky making and enjoys great transport links, they couldn’t have chosen a less forgiving location for human habitation.

Slap-bang in the geographical heart of Scotland and very well connected by road and rail, Dalwhinnie (meaning “meeting place” in Gaelic) endures an exposed location at the highest point on the railway linking Speyside with the central belt of Scotland. Doubling as a meteorological station, it’s officially been classed as the coldest inhabited place in Scotland (and probably the UK) with an average temperature of just 6°C. It’s regularly cut off in winter due to snow falls so the distillery maintains the ability to be completely self-contained with a hostel also located on site to house the staff.

Production commenced in 1898 but unfortunately Messrs. Grant, Sellar and Mackenzie ran into financial strife and sold off that same year to a bloke named A. P Blyth who bought the distillery for his son. The youngster didn’t fare much better because seven years later in 1905 the distillery, by now renamed Dalwhinnie, was sold at auction to US distillers Cook & Bernbeimer, making it the first Scotch distillery to be owned by a foreign company. Foreign ownership endured a mere 14 years before blenders Macdonald Greenless took charge, later licensing it to Buchanan’s from 1926. Fire sadly destroyed the distillery in 1934, but it reopened from 1934-40, closed for several years again and then was back up and running from 1947 to date. The distillery was brought under United Distillers umbrella in 1987, and Diageo from 1997.

Dalwhinnie is one of the best known single malts in the world and thanks to its honeyed, heathery and quintessential Highland style it’s long been a staple in virtually every whisky shop and decent bar in the world. Today of course whisky lovers are spoilt for choice with an incredible range of single malts, not only from Scotland, but also from further abroad and even in our own backyard here in Aus, so it’s fitting this month for us to review the remarkable role that Dalwhinnie played in shaping Scotland’s and indeed the world’s single malt industry.

Looking back to when it all began, it was in the 1970s of course that Glenfiddich first made the bold move to bottle some of their whisky as single malt instead of using it for blending. The result was good, people liked it and so the single malt category was born. Over the next 20 years the fledgling category slowly grew as other distilleries like Glenlivet and Balvenie joined in, but it was always massively overshadowed and outnumbered by the big blends like Johnnie Walker, Chivas and Bells. The turning point came in 1988 when United Distillers (soon to become Diageo) conceived an ingenious new way to promote single malt whisky that would ultimately benefit the entire industry. Realising that malt whisky’s greatest asset is its diversity of flavour and provenance, United Distillers grouped six malt whiskies from their portfolio, each representing a different region and flavour profile, and named this collection the “Classic Malts of Scotland”. Dalwhinnie 15yo represented the Highlands, Talisker 10yo the Isle of Skye, Cragganmore 12yo Speyside, Oban 14yo the West Highlands, Lagavulin 16yo Islay and Glenkinchie 12 the Lowlands. Presented on a smart wooden plinth, Dalwhinnie and the other Classic Malts were an instant success and soon became the staple of bars and liquor stores across the world, not to mention the plush executive offices of the 80s and 90s. Aside from the huge success at company level, the far greater achievement was that of introducing to the consumer the concept of whisky regions and their flavour profiles, thereby growing the entire single malt whisky market by creating a demand for single malts from other distilleries – eventually placing us in the privileged position in which we find ourselves today. We’ll drink to that!