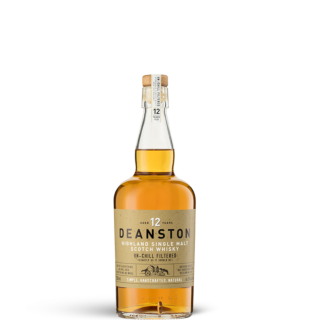 Our second release dating back to the early days, Deanston 12 Year is a classic “any time of the day” malt.

Deanston is a modern craft Scotch and is fortunate in that it is not bound by tradition in the way that much of the rest of the industry is, allowing things to be done a bit differently. For Deanston this means producing Scotch whisky in harmony with nature. In 2000 the Distillery started producing organic whisky certified by the Organic Food Federation using only Scottish grown barley free from pesticides and chemicals. Deanston’s green credentials were augmented in 2008 when the packaging was redesigned to better reflect the brand essence. All materials are now either recycled or recyclable, and gift tubes were replaced by cardboard gift boxes in order to further reduce weight and carbon footprint. One of the most distinctive things about Deanston’s production techniques is that everything is done by hand so to speak. No computers or technology is used and this allows the team to rely on their senses to ensure the best quality spirit is produced.

The Distillery boasts some big toys including an 11-ton open topped mash tun, the only one of its size in Scotland, and Deanston has a production capacity of 3 million litres. Four pot stills (2 wash and 2 spirit) are used and the upward sloping lyne arms and boiling balls distill a beautiful, light spirit.

Deanston Single Malt is of natural colour (no spirit caramel is used), un-chill filtered and bottled at 46.3 % ABV. The consistent flavour profile of Deanston 12 YO is sweetness, balanced by a malty spiciness on the palate. Around 15% of the production is represented in the Deanston Single Malt range with the balance of whisky production contributing to blended brands such as Scottish Leader and the Black Bottle blends.

Deanston Distillery is a fascinating story of commerce and endeavour. The Distillery began its life as a flax mill and in 1785 John Buchanan and his brothers from Carston decided to use the conveniently located River Teith to upgrade it to a state-of-the-art water powered mill and named it the Adelphi (after the Greek meaning brothers) Mill. The decision in later years to convert the mill to a distillery was largely influenced by the pure waters of the, once again, conveniently located River Teith.

The cotton mill changed hands in 1808 when James Finlay & Co. bought it off the Buchanans and developed it into the industrial leader of its time. A decrease in the demand for cotton in the twentieth century saw the mill’s fortunes decline until it was finally shut in 1965, but its sabbatical was short lived. Through the efforts of its owners James Finlay & Co and their partners Brodie Hepburn & Co, and A.B (Sandy) Grant, known together as Deanston Distillers Ltd, it reopened a year later as the Deanston Distillery having undergone an extensive £300,000 (approx $550,000) refurbishment. The Distillery started bottling in 1971, calling its first single malt Old Bannockburn and the first single malt bearing the name Deanston was produced in 1974.

As a mill it boasted some powerful machinery. one of its waterwheels, a 300 horsepower beast named Hercules, was the largest worldwide. In 1949 the waterwheels were decommissioned and replaces with the more efficient hydro-turbine and steam generators that currently power the distillery and the excess power is sold back to the Scottish national grid. In an age of carbon footprint challenges, it seems the good folk of Deanston were years ahead of their time in doing their part for the environment, and this forms a core part of the Deanston ethos.

Originally designed by Sir Richard Arkwright, the architecture is a striking feature of the Distillery and the large, vaulted warehouse now houses up to 45,000 casks of maturing whisky. The warehouse is recognised as one of Scotland’s greatest surviving Recency industrial buildings, and whisky guru Jim Murray described it as a “cathedral to whisky maturation”. The roof in the warehouse was originally insulated with soil to mute the racket made by the hundreds of looms and in keeping with the green ethic at Deanston, the soil was reused as the foundation for a local community vegetable garden.