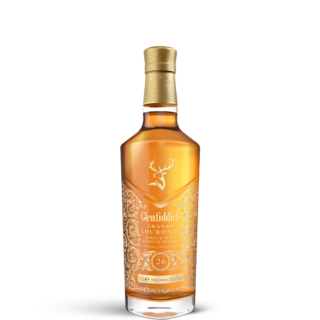 Highly respected Glenfiddich Malt Master Brian Kinsman said "The Grand Series perfectly encapsulates Glenfiddich’s spirit of innovation and our ability to experiment with aged liquid and intriguing finishes. Grande Couronne is the latest to exemplify that approach. It is the only Glenfiddich single malt that has matured in American and European oak casks and finished in rare French Cognac casks. The length of the finish, two years, is highly unusual and adds extra layers of sweet, toasted oak and velvety aromas of café crème, brown sugar and soft spice."

As well as those extra layers added by the Cognac casks, you’ll find Glenfiddich’s signature orchard fruits amongst a range of patisserie items full of baking spices; the 26 years in cask has really brought out some lovely desert notes.

The Glenfiddich Grande Couronne 26 Year Old is whisky grandeur at its best, a decadent liquid for both collectors and anyone wanting to save a special bottle for a significant moment. It’s mouthwateringly delicious and most certainly worthy of the crown bestowed to it.

Orders for Glenfiddich Grande Couronne 26 Year Old have now closed. Sign Up Free now to get your hands on our upcoming releases.

Despite being one of the biggest distilleries in Scotland, Glenfiddich still has one of the most hands-on approaches to whisky production. The only distillery to use a single source of natural spring water from start to finish (the infamous Robbie Dhu Spring), Glenfiddich has the capacity to produce over 20,000,000 million litres a year. With a 60-hour-long fermentation in 50,000 litre washbacks, the wash is feed through their 43 stills of the same shape and size as the original stills from 1886. These are heated by a mix of steam and direct fire. Having the choice of both steam and direct fire gives Glenfiddich two different spirit types which are then combined together before being put into casks.

Today Glenfiddich is the world’s biggest selling and most awarded single malt and William Grant can rest peacefully knowing that his descendants have expanded his vision, making not only the best dram in the valley, but the world. And of course, as an added bonus his descendants have become Scotland’s richest family, with a staggering fortune of $3.9 billion. 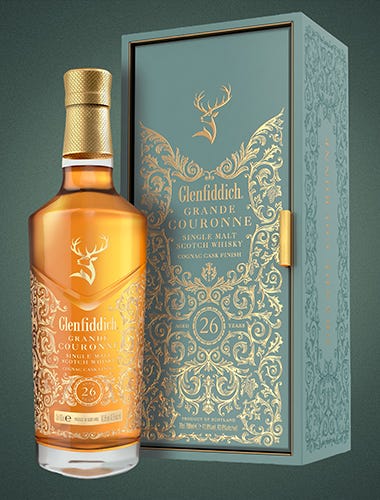