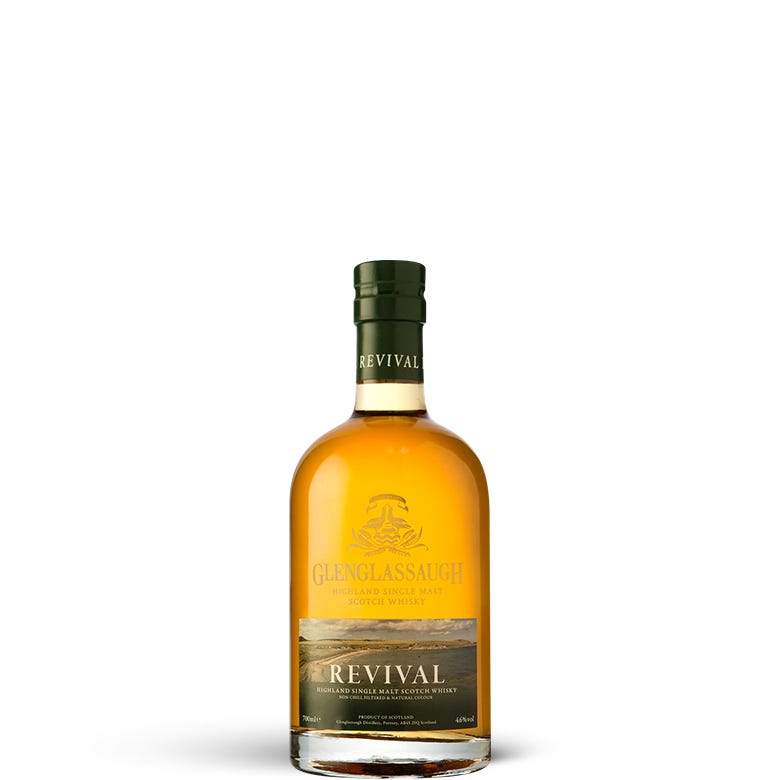 The Glenglassaugh Revival is the first core expression since Glenglassaugh resumed operations in 2009. Matured in ex-bourbon, ex-red wine and Oloroso sherry casks this is highly complex Highland at its best.

Malt comes from the three major maltsters, Crisps, Boort and Baird, and is unpeated other than a few batches peated to 30ppm for the Torfa and Octaves expressions. Mashing takes place in a traditional mashtun with a grist weight of 5t and fermentation, using Mauri pressed yeast, runs for a minimum of 60 hours. The distillery has six washbacks (four wooden and two stainless steel) and two boil ball shaped stills with the capacity to produce up to 1,000,000 litres per annum.

As the name suggests, the Glenglassaugh Revival is the first core expression from the distillery since resuming operations in 2009, and follows an interesting maturation regime involving ex-bourbon and ex-red wine casks, before being revatted for a double maturation in Oloroso sherry butts.

The Glenglassugh Revival is bottled at 46%, non-chill filtered and of natural colour.

Maturation: Initial maturation in ex-bourbon and ex-red wine casks before being revatted for a second maturation in Oloroso sherry butts.

The highly underutilised Glenglassaugh Distillery has a history unlike any other we’ve featured, as thanks to all manner of misfortune it’s only worked for 66 of the 141 years of its life.

The Highland coastal distillery was established in 1875 at Sandend Bay by a local entrepreneur called James Moir. Moir was a wine and spirits merchant who saw an opportunity to supply whisky through his existing business. He went in cahoots with his two nephews and the local copper smith Thomas Wilson, and business boomed from the start. The original plan was to bottle the whisky under his own label, but Glenglassaugh’s rich, complex whisky quickly found fame with blenders and most of it ended up being sold to William Teacher and Sons in Glasgow. Following Moir’s and Wilson’s deaths, the nephews reequipped the distillery and sold it off to Robertson & Baxter in 1892 who subsequently moved it to their other business, Highland Distillers, later in the same year.

Under Highland Distillers Glenglassaugh’s complex whisky continued to add a much desired level of body and flavour to blends, sadly however, Glenglassaugh’s remote location high up on the north east coast of Scotland also meant that it was an easy target for closure during busts in the whisky industry. The first of these occurred in 1907 and the distillery remained shut for 53 years until it was reopened in 1960 to help cover the demand for blended whisky during the boom of the 60s and 70s.

Glenglassaugh’s run of bad luck continued as the style of blended whisky had changed somewhat over the 50 years that it had been shut and modern blenders found it a challenging whisky to work with. It’s a highly individual malt that doesn’t mesh very well with other elements in a blend, but is perfect as a single malt. Unfortunately for Glenglassaugh the single malt market hadn’t yet been established in those days. A number of unsuccessful trials were undertaken over the years to try and change the whisky’s character and eventually Glenglassaugh fell silent once again in 1986 after only 26 years of operating – its superior quality (and another bust) being it’s undoing!

Luckily for all of us there’s a happy ending to the unlikely tale of woe and misfortune. In 2007 a group of whisky enthusiasts’ search for a single malt distillery led them to Glenglassaugh. While there had been painfully few single malt releases of Glenglassaugh over the years, these guys immediately recognised what Highland Distillers had been missing; that Glenglassaugh’s rich complex character made it excellent single malt. After months of routine refurbishments, Scotland’s First Minister, Alex Salmond, reopened the distillery on 28 November 2008 and under the leadership of industry veteran Stuart Nickerson the distillery was brought up to steam again.

In 2013 Glenglassaugh was acquired by The Benriach Distillery Company, bringing it under the control of Billy Walker, a living legend who’s spent the past decade restoring both Benriach and Glendronach back to the cult whiskies that they are today, then earlier this year American giant Brown Forman bought The Benriach Distillery Company. In a cycle that’s taken 141 years to complete, Glenglassaugh’s whiskies are finally being bottled as single malts, the way James Moir probably intended when he first established the distillery… and once you’ve tasted the Revival you’ll be very thankful for that.