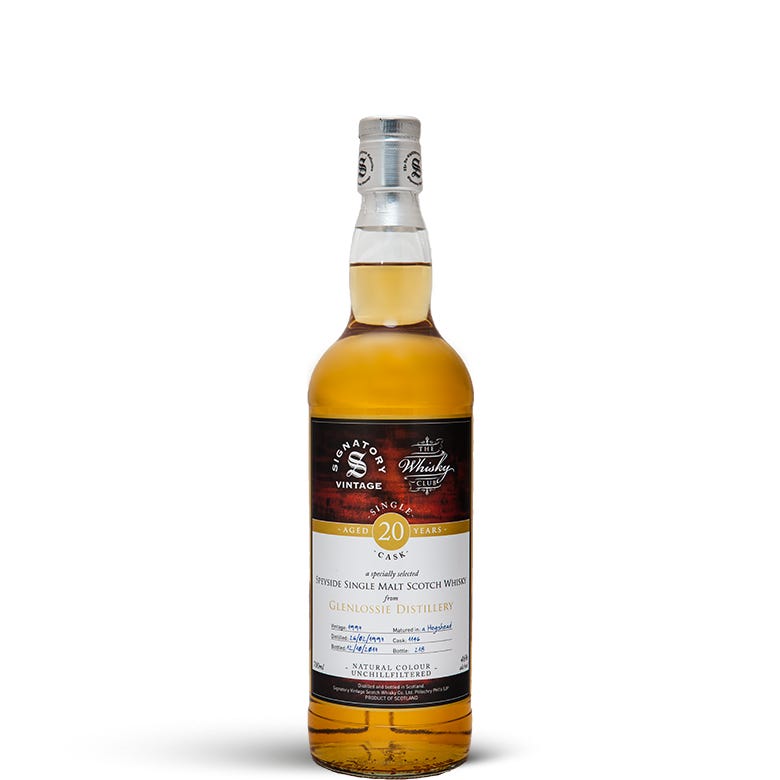 We kicked off 2018 with unprecedented value and quality with the amazing Glenlossie 20 Year Old Single Cask, created exclusively for our Members in partnership with boutique bottlers Signatory Vintage.

Nose Intense and very complex. Opens with toasted malt and oak then softening into a delightful array of sweets: blackcurrants, toffee, vanilla, butterscotch and a touch of ginger.

Palate Marvelously oily and smooth with layers of sweet oranges, peaches, Victoria sponge cake and a touch of anise.

Finish Very long. Ginger cake, custard and lingering anise, or is it liquorice?

Food Match Perfect with cheese, particularly brie and aged cheddar. You’re in for a treat!

Since inception, Glenlossie’s character has been defined by a delicacy of flavour. Rarely seen as a single malt, very few whisky connoisseurs have ever had the pleasure of enjoying this fantastic Speysider.

Glenlossie’s unique flavour is primarily influenced by its location and still design. It’s situated by the Laich of Moray – a plain by the sea. This low-lying land has been farmed by generation upon generation, and its proximity to the sea imparts coastal notes along with a touch of smoke on the nose. The long fermentation times add a touch of grassiness, but the big point of difference here is the design of the stills. Carrying the same shape and design since day one, the onion shaped stills feature a purifier between the lyne arm and the condenser, which diverts some of the alcohol vapours back to the pot to be distilled again. This increases the amount of reflux, yielding a light, delicate yet oily textured whisky, characteristics which come through in spades in the Club’s bottle this month.

This has made the Lossie very popular with blenders, and it’s been an important part of many Diageo blends, in particular Haig (better known as Dimple) who’ve used the majority of production since the 1930s. The downside of this is that practically nothing is made available for bottling as single malt. In fact, the only official bottling in recent years was part of the discontinued Flora & Fauna series in the 1990s, where it appeared as a 10-year-old. Other than this, it’s hardly ever seen as a single malt: a massive shame given the few Lossie single malts that do see the light of day are consistently excellent, yet very, very few people ever get to enjoy them.

Fortunately we’ve found a way to remedy that for you. We’ve teamed up with Scotland’s leading boutique independent bottlers and owners of Edradour distillery, Signatory Vintage who’ve been successful in sourcing a series of outstanding Glenlossie casks distilled back in 1997. This 20 Year Old whisky has been bottled at 46% as a set of single casks, un-chillfiltered and natural colour and it tastes incredible. We’re very proud to usher in the New Year with this unprecedented Glenlossie as our first whisky for 2018, or as Jim Murray puts it, “getting harder and harder to find a dud Lossie these days: glad people are getting a chance to be in on one of the best kept secrets in Scotland”. Enjoy!

To kick 2018 off with a massive bang, we’re bringing you an epic 20-year-old single cask from another of Scotland’s hidden gems; a true workhorse distillery that’s been pumping out the good stuff since 1876, yet the chances are you’ve never even heard its name.

Glenlossie, known simply as “The Lossie” by those lucky enough to be in the know, brings with it a riches-to-rags tale of entrepreneurship gone wrong that could well be the inspiration for a Hollywood film.

The Glenlossie Distillery was the dream of publican John Duff, one of the 19th century’s most interesting whisky entrepreneurs and a man with his sights firmly set on big things. Having gained experience managing Glendronach, Duff decided it was time to go his own way and enlisted leading architect Alexander Marshall MacKenzie (who designed Australia House in London as it happens) to draw up plans for his distillery. Designed to be independent of steam power, Marshall MacKenzie incorporated the natural slope of the land to turn a waterwheel generating 8hp, sufficient enough to power the distillery’s machinery believe it or not! Distilleries like this don’t come cheap, so to help pay for it all, Duff promptly enlisted friends as partners – public prosecutor Alexander Allen, surveyor H.M.S. Mackay and a year later John Hopkins, a well-known blender.

A decade later in 1888 with consumption of whisky skyrocketing both in the UK and the colonies and the distillery booming, the ever-entrepreneurial Duff decided to pack up and move his family to South Africa, where he planned to build the country’s first whisky distillery in the Transvaal. Sadly, he misread the political tensions that were bubbling away beneath the surface in the Boer Republics and after relocating his wife and three daughters and sinking huge amounts of money into the project, the whole thing fell over when South African president Paul Kruger, a man with a mission against anything British, put a stop to it. Unfazed by this, Duff once again packed up his family and headed Stateside, only to have his American dream meet with the same fate…

Duff was soon back in Scotland and working as distillery manager at Aberdeen’s Bon Accord distillery. But of course John was a man who would never be content with working for the man, so it wasn’t long before he got the itch to have another go and in 1894 he teamed up with George Thomson and Charles Shirres to build Longmore Distillery. The malt proved to be a hit with blenders, so after investing £20,000 into Longmore, Duff bought Thomson and Shirres out of their shares, hoping to reap the rewards for himself. It was boom time after all, so he decided to go all in and punted a further £16,000 to build BenRiach Distillery in 1898.

Timing is, of course, everything, and when the whisky boom busted at the turn of the Century, BenRiach and Longmorn were struggling and John Duff went bankrupt.

Meanwhile back at Glenlossie, things were going well and demand remained strong. Alexander Allan died in 1896 and Duff left the company. Mackay and his nephew J.H. Hair continued operations, forming The Glenlossie-Glenlivet Distillery Co. Ltd. and commenced a series of upgrades to the distillery, not the least of which was their own railway siding.

In 1914 the distillery closed for a short time in an effort to conserve barley during the war, and in 1919 it was bought by The Distillers Company Ltd (who went on to become Diageo). Sadly in 1929 fire broke out in the distillery which was fought by workers with a horse drawn fire engine from 1862 and repairs were carried out quickly. This event brought about the end of the Glenlossie-Glenlivet Distillery Co.’s management of the distillery, and operation was passed to Scottish Malt Distillers, a subsidiary of DCL.

Despite another halt in production thanks to World War II, the Lossie continued to thrive and in 1950 another round of improvements was made including a huge new warehouse allowing further growth into the future – and grow the site did, with an extra two stills being installed, bringing the total to six in 1962. It was at this time the distillery converted from steam power to electricity.

A second distillery, Mannochmore, was built right next to Glenlossie in 1971. Up until 2007 the two distilleries operated for six months of the year each at which point they both commenced working full time, this time round to cater for the current whisky boom. The site also gained a dark grains plant which processes draff and pot ale from the various Diageo distilleries into animal food and fourteen on-site warehouses hold in excess of 200,000 casks of maturing whisky.

Despite being one of Scotland’s whisky powerhouses Glenlossie is rarely ever seen as a single malt, even from the independent bottlers, which makes this month’s release so much more special: a 20 Year Old, 1997 vintage, Single Cask release bottled exclusively for the Club in partnership with boutique independent bottlers Signatory Vintage.