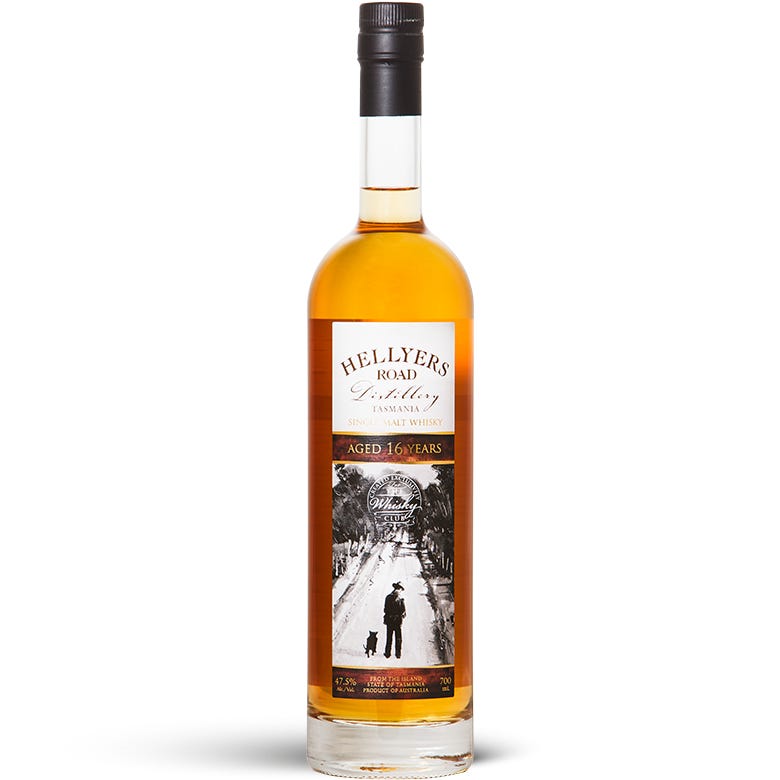 We kicked off the year in serious style with a jaw dropping 16 Year Old Tasmanian Single Malt without the ‘Tassie Pricetag’. A rare beast indeed, and easily one of the oldest, most delicious and exclusive Tasmanian single malts ever released.

Palate Richly complex, big and chewy with notes of butterscotch, dark chocolate and ripe orange zest followed by roasted barley and fresh Tassie apple pie that will have you running back for a second helping!

Finish Velvety smooth and buttery with a lingering sweetness and just a hint of coffee.

The largest whisky distillery in Australia, Hellyers Road has become well known and loved for its richly complex, fruity style of single malts. Thanks to strong and consistent production since inception, today Hellyers is in the most enviable position of all Australian distilleries in that it sits on a vast reserve of mature stock dating back to the very early 2000s. As a result it can do what no other local distillery can, feature a full core range including four NAS expressions (Original, Pinot Noir Finish, Peated and Slightly Peated), the 10 Year Old Slightly Peated and the recently released flagship 15 Year Old Original. The single cask Masters Series offers a very well priced glimpse into the distillery’s vast reserves and has understandably become very popular with connoisseurs, and finally of course there’s our 16 Year Old Limited Edition!

Like all Tasmanian distilleries, Hellyers uses locally grown Tasmanian barley and pure Tasmanian rain water. Barley is malted locally at Joe White Malting in Devonport, though the distillery did also bring in 50,000 tons of peated malt from Scotland back in 2004 allowing for production of their peated whiskies.

Whilst their size by comparison to other local distilleries is huge, in the overall scheme of things and by comparison to Scotland, with a capacity of 100,000 litres a year it’s still a tiny craft operation. The distillery is equally humble, “we think big and act big, but when compared to Europe’s finest, we’re actually quite small. And that’s good, because it keeps us trying hard. We try hard to produce Australia’s very best single malt whiskies.”

It certainly helps to have really good gear when you’re on a mission to make the country’s best whisky. Hellyers Road features a whopping 60,000 litre wash still and a 20,000 litre spirit still all set up so that it can also be remotely controlled from Master Distiller Mark Littler’s home when he’s not in the distillery. So while we’re all tucked up in bed we can rest assured that Mark is making whisky for us around the clock!

You’ll find Hellyers Road’s unmistakably rich, complex and fruity style at its absolute best in our January whisky, a rare limited edition created exclusively for the Club and drawn from an historic set of first-grade first-fill American Oak casks laid down back in 2002. Crafted using premium Tasmanian barley and pure Tasmanian water this is some of Hellyers Road’s, and indeed Tasmania’s oldest whiskies and of course it’s non-chill filtered and bottled at natural colour.

A hallmark achievement in Australian whisky distilling, we couldn’t be happier to open 2019 with this superb example of Tasmania’s finest! Enjoy!

As far as distillery histories go, Hellyers Road’s is one of the most charming. The distillery was established in 1999 by a group of whisky-mad dairy farming families from the wild and windswept northwest of Tasmania, and today remains firmly and very proudly in the hands of these same families. The story actually begins way back in 1956 when the previous generation gathered to talk business. Faced with the typical challenges of dairy farming, these hard-working generational men and women of the land wanted greater control over the pricing and distribution of their milk. The discussions culminated in the sensible conclusion that strength lies in unity, and the formation of the Betta Milk Cooperative, now Tasmania’s leading milk producer.

All was well (as well as it can be with dairy farming of course) until 1994 when Australia’s Dairy Industry was deregulated. Faced with the new challenges and uncertainty presented by the open market, the Betta Milk families did what all good farmers do and diversified. Except instead of following conventional wisdom and going into things like cropping or meat they took a massive leap of faith left-field and made single malt whisky… and it’s paying off in spades.

Located in prime dairy farming country on the North West Tasmanian coast, Hellyers Road Distillery was named after Henry Hellyer, a legendary surveyor from the Van Diemen’s Land Company who made his name mapping northern Tasmania. His greatest achievement, other than having a distillery named after him of course, was digging out the Old Surrey Road – an enormous job with a handful of men and only the most basic tools. And you’ve guessed it, Hellyers Road Distillery is located on Hellyer’s very own Old Surrey Road.

The first spirit flowed through the Hellyers Road stills 22 years ago on January 29, 1999 and seven years later in 2006 the first whisky was bottled. A lot changes in 14 years and as far as a good punt goes, the decision to make whisky has been as good as gold because today the Tasmanian whisky industry couldn’t possibly be in a better place.

But it wasn’t always so rosy. Back in 1838 Tasmania was home to no fewer than 16 legal distilleries and countless illegal ones, and with a growing population of thirsty locals the industry boomed. At least it did up until the point Lady Jane Franklin, wife of Tasmanian Governor John Franklin, said “I would prefer barley be fed to pigs, than it be used to turn men into swine”. Needless to say, Tasmania ended up with a lot of happy pigs and no shortage of bacon, but sadly no more local whisky after Lady Jane had her way and laws were introduced that forced the closure of all Tasmanian distilleries at the time.

The drought was broken in 1991 when a chap by the name of Bill Lark went trout fishing in Tasmania’s Highlands with his father-in-law, Max. Enjoying a dram in a park in Bothwell, Bill questioned why nobody was making whisky in Tasmania – after all, not only is the climate perfect, but there’s also an abundance of crystal-clear water, locally grown barley and peat bogs. It just seemed logical. So, Bill being Bill set out to have a go, but upon applying for a license discovered Lady Jane’s law was still in place. Undaunted he contacted his local MP, the law was abolished, and Lark Distillery was formed in 1992, paving the way for the Australian whisky industry as we know it. Hot on the heels of Lark came Small Concern Distillery (1992), Sullivans Cove (1994) and Hellyers Road.

Together these distilleries forged ahead and were joined along the way by others including Nant, Overeem, Belgrove and McHenry, and in recent years Old Kempton, Shene, Spring Bay, Fannys Bay, Adams, Launceston and Killara to name only a few of the sixty or so (that’s more than Speyside!) distilleries that make Tasmania the whisky isle of the South.

Tasmania has become a whisky region in itself, the name being used in the same breath as the long-established Scotch regions like Speyside and Islay, and there’s been no shortage of awards either – with Sullivans Cove, Belgrove, Lark, Overeem, Nant and of course Hellyers Road all achieving international accolades.

Today Hellyers Road Distillery is not only Australia’s biggest selling local whisky but can be found all across Europe, as well as Japan, China and the United States. In 2017 it was named Tasmania’s Exporter of the Year.

Of course, as a fledgling industry, the recognition that comes from winning major international awards is a massive boost and Hellyers Road is no stranger to the podium. Awards include being named Australia’s Best Whisky in 2010 by the Malt Whisky Society of Australia, Best New-World Whisky at Whisky Live Paris in 2013 while the Slightly Peated scooped up both Gold and Champion Single Malt status at the Australian Distilled Spirits Awards, a Gold at the 2018 World Whisky Awards, Best Australian Single Cask at the 2020 World Whisky Awards and most recently following that up with Category Winner for Australian Single Malt, No Age Statement with the Hellyers Road Henry's Legacy Freestone Cove at the 2021 World Whisky Awards.

Topping it all off, Visitor Centre manager Sharon Dean was named a ‘World Whisky Icon’ for her outstanding work at the distillery. One of the original team members, Sharon has seen the distillery’s Visitor Centre grow from a few thousand visitors a year to becoming one of Tasmania’s most popular tourism destinations with over 40,000 visitors a year, many making the pilgrimage from overseas to visit the home of their favourite malt.

In 2019 the Betta Milk Cooperative sold the milk side of the company off, to be able to completely focus on and expand the Hellyers Road Single Malt brand.

Mark Littler, former CEO and Master Distiller, has had a long history with The Whisky Club, being one of our very first Members, and created a series of historic and fanatically popular malts specially for his fellow Members over the years. Our March 2021 malt, Hellyers Road Aged 16 Years Pinot Noir Cask Finish, was his very last project at Hellyers and needless to say holds a very special place in the Club's hearts and whisky shelves.

One of the biggest distilleries in Australia, Hellyers Road has been at the centrepiece of Australian whisky since the first spirit was laid down in 1999. With a capacity of 120,000L when they first started, they were able to hit the ground running and put down a constant stream of casks in those early years. Their trademark fruity notes and rich malt characteristics are two of the many reasons Hellyers Road is the biggest selling Australian whisky.

Using predominantly Tasmanian barley, malted just down the road at the local malting house at Joe White, they import a very small amount of peated barley from Scotland to help with the production of their peated products.

Hellyers Road Distillery boasts not only the biggest stills in Australia, but their stills are also actually bigger than any currently in Scotland. The size of these stills helps give Hellyers Road a unique and distinctive flavour profile that works extremely well in the heavily charred ex-Bourbon casks they use to mature their whisky in for the better part of its life. With less reflux in their massive still, the spirit has been designed to spend a longer time in cask than most Australian whiskies. As a result of this, Hellyers Road sits on the largest aged stock of whisky in the country.

The majority of this stock makes up the presence of their core range expressions - Original, Pinot Noir Finish, Peated, Twin Oak and Slightly Peated, the 12 Year Old Slightly Peated and their flagships the 12 and 15 Year Old Original.  They’ve also established a connoisseur following with the release of their Single Cask Master Series which showcases Hellyers Road at the height of their capabilities. Then of course we have our three 16yr old Limited Editions made exclusively for The Whisky Club.