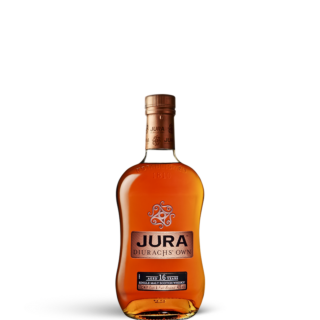 Jura 16 Year Old Duriach’s Own, so named because it’s the Jura islanders’ whisky of choice, kept us in high spirits over Christmas.

Isle of Jura distillery is owned by independent bottler Whyte & Mackay, who bought it in 1993. This was a significant moment for Jura because it brought production under the umbrella of Richard Patterson, third-generation master distiller and whisky industry legend, who this year celebrates his 45th year in whisky. Also know as “the nose”, Patterson is best known for his work with Dalmore and creating Whyte & Mackay’s award winning range of blends, and has been instrumental in turning Jura’s single malts into the sought-after delights that they are today.

Jura is a relatively large distillery considering the size of the island, producing around 2 million litres of spirit per year, much of which goes to the popular Whyte & Mackay blends. The current distillery is built on the ruins of the old, and all the equipment was built to a new design including the introduction of very tall stills. These stills are unique, and set Jura apart from other distilleries because they give the distiller the flexibility to create a mix of whiskies ranging from sweet and mellow to rich and smoky. This ability to create a Jura for every palate has become the one of the distillery’s hallmark.

Another Jura hallmark is the move away from the heavily peated malts made by Small Isles Distillery to a lighter, fruity spirit. This fruity character allows Jura whiskies to develop flavour and body in a relatively short space of time resulting in the full-bodied and very complex malts that the island has become known for. In recent years heavily peated batches were reintroduced and these are run for a few weeks each year for the Prophecy and Superstition expressions.

Duriachs’ Own, so named because it’s the islanders’ whisky of choice, is Jura’s flagship expression. It’s made up of whiskies aged for a minimum of 14 years in American oak casks and specially selected for their body and complex fruit notes, before spending a further 2 years in ex-Amoroso Olorosso sherry casks. This finish and long maturation subverts the Jura light and floral house style and gives Diurach’s Own the very rich and full-bodied character that’s made it so popular and sought after worldwide.