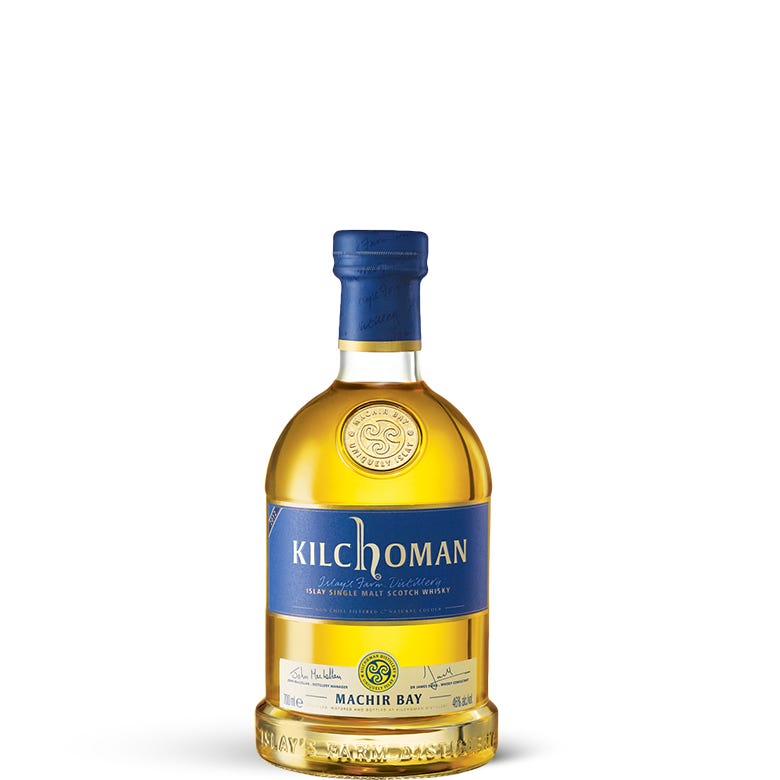 Finish Tremendous persistence of spirit lingers long on the tongue with dark chocolate, clove and peat smoke, leaving a satisfying experience that motivates another visit to this classic Islay dram

With it’s unwavering barley to bottle ethos, Kilchoman was conceived as the ‘ultimate farm distillery’ – taking whisky away from the factory production systems and back to it’s roots by the barley fields. Historically, Islay became famous for whisky production given it’s ideal barley producing environment and plentiful water and peat for drying the malt. Anthony Wills specifically selected Rockside Farm in the very far west of Islay to establish his distillery as aside from his fondness and connection with the region, the property is renowned for growing the best malting barley on the island.

Not only do Kilchoman grow as much of their own barley as they can, but their handcrafted ethic also extends to traditional floor malting, a production methodology otherwise largely lost to a bygone era. Thus for a new 21st Century distillery, Kilchoman is already an old soul in tradition.

Producing artisan whiskies of a genuinely limited nature, Kilchoman has a production capacity of approximately 120,000 litres of new make spirit. Our whisky this month is the signature expression to their range, the much acclaimed Machir Bay, so-named after the bay by which the farm is situated on the Rinns of Islay peninsula. Machir Bay is a non-age-statement (NAS) work in progress, with the whiskies becoming older with each subsequent release allowing devotees to experience the developments from release to release as the vatting age increases year on year. Currently, Machir Bay is a vatting of 5 & 6 YO malts that defy their younger age in terms of depth, quality and character.

The result, for your enjoyment this month, is an exceptional craft presentation of a single malt, produced on the Islay farm using traditional methods and with no caramel or chill filtration.

How Kilchoman is made
In contrast to the vast majority of other distilleries in Scotland, the Kilchoman production process starts on-farm at planting time with soil preparation, followed by planting, crop protection and finally harvesting. Kilchoman’s farm-grown barley variety, Publican, thrives in Islay’s robust weather conditions and whilst this provides around 100 tonnes, the balance of barley is sourced from Port Ellen maltings on the island in the Optic variety. Both are kept separate throughout production to maintain control and better manage proportional options with the final expressions released.

The barley is then prepared for malting: Kilchoman steep their barley overnight in 2 tonne batches, repeating the process to achieve a moisture content of approximately 45%, perfect for malting. The steeped barley is then painstakingly spread across the malting house floor and regularly agitated (raked and turned) over the next 5 – 6 days to achieve germination, while maintaining a 35% moisture content. The green malt spends 10 hours over a peated fire to achieve a phenol level (peat smoke intensity) of 20-25 PPM before a final 40 hours of indirect drying from an oil fired system to arrive at a moisture content of 5%, perfect for gristing and mashing. This produces a total of 6000 litres of wort and the fermentation ranges through 80 to 120 hours. The resulting wash is now a cloudy, smoky, strong beer (without the hops) measuring around 8% ABV.

True to their artisan ethos, the stills, mash tun and condensers were all purpose built for Kilchoman, rather than following the common practice of reusing old equipment purchased from dismantled closed distilleries. Their bespoke stills are some of the smallest in Scotland and are crucial to the style and character of Kilchoman’s unique spirit, with a high reflux level meaning more copper contact with the spirit and ultimately a lighter body and mouth feel. The wash still is charged with 3000 litres of wash which in turn produces 1000 litres of low wines at 20% ABV. The spirit still is subsequently charged with 1600 litres of low wines to produce 300 litres of spirit at 69% ABV, reduced to 63.5% ABV cask strength new make spirit.

The new make spirit is then transferred to first fill ex-Buffalo Trace barrels & first fill Oloroso sherry butts/hogsheads ex-Miguel Martin, Jerez, Spain. From there, it’s up to distillery manager John Maclellan to decide when and how the wonderful artisan whiskies of Kilchoman are bottled. With more than 20 years at the historic Bunnahabhain distillery, John and his small team are producing malts of great acclaim and innovation, released at younger ages and in limited bottling. Machir Bay has led the way in terms of artisan non age statement expressions.

Kilchoman, Islay’s farm distillery
One historic day back in 2005, a charming barn-like distillery by the name of Kilchoman was opened on a farm in the Rinns of Islay, a fertile area on the west coast of the famed whisky region of Islay in the Inner Hebrides of Scotland.

This was the first distillery to be established in Islay in over 124 years, the first farm distillery on the island and remains one of just four farm distilleries in the whole of Scotland. Sharing a backyard with some of Scotch whisky’s most revered and famous names, it was a task of daunting proportions, however one of great vision and initiative on founder Anthony Wills’ part.

The smallest, newest and the most westerly distillery of Islay has since attracted an extraordinary amount of interest for its authentic craft approach to creating the finest ‘barley to bottle’ single malt with impressive substance and terrior.