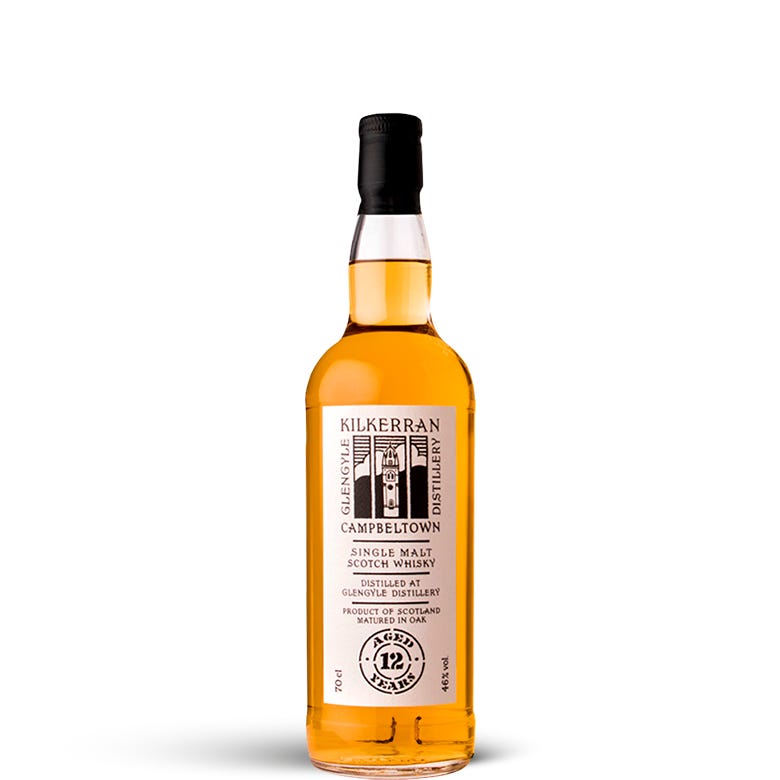 Possibly the most anticipated new release of the decade, Kilkerran 12 Year Old made its long awaited Australian debut with the Club this February.

Nose Oak notes are dominant, followed by toasted marshmallows and dried fruit pudding, as well as cherries, marzipan and a hint of peat

Finish Velvet and smooth with lemon meringue, and to conclude there’s an oiliness and saltiness that you’d expect from a real Campbeltown dram

Given the distillery name and background, you may be wondering why the fabulous stuff we’re drinking this month is called Kilkerran and not Glengyle! Well, Glengyle is also the name of another company’s blended Highland whisky, so aside from any legal considerations Mitchell’s Glengyle Distillery obviously wanted to avoid possible confusion between the newest single malt to come from the Campbeltown region and a pre-existing Highland blend. But even more important, they tell us, is the fact that they’re so proud to be continuing and adding to the great Campbeltown distilling tradition that the name ‘Kilkerran’ so aptly reflects. Kilkerran is derived from from the Gaelic ‘Ceann Loch Cille Chiarain’, which is the name of the original settlement where Saint Kerran had his religious cell and where Campbeltown now stands. Kilkerran also happens to be a more suitable name for a new Campbeltown malt since it was unusual for the old Campbeltown distilleries to be called after a Glen, a custom more usually associated with the Speyside region.

While the distillery was purchased in 2000, production didn’t commence until 2004 because major refurbishment works were required. In essence all that remained of the distillery were the buildings themselves. Inside, the place was a mess, overrun with pigeons, had a very leaky roof and needed a huge amount of work. The works were overseen by industry legend and Whisky Hall of Fame inductee Frank McHardy, who’s been with Springbank since 1977, and work progressed rapidly with the bulk done by the middle of 2003. A total refit was required and help was called in from all corners of Scotland. Interestingly the stills came from the closed Ben Wyviss Distillery and were carefully modified for the desired Campbeltown whisky profile, while the mill was a gift from Craigellachie Distillery who had recently purchased a new one for themselves.

Distillation kicked off in 2004, but it wasn’t until last year that the flagship 12yo single malt was released. The extremely passionate team at the distillery chose to follow their own path, not bowing to the non age statement trend to which many of its younger peers have succumbed. Interestingly, despite the thorough refurbishment, the distillery also only runs for a very short period each year when the team at Springbank come down the road to run the stills for about six weeks, producing a precious 55,000 litres of spirit. This is about the same small output as somewhere like Lark or Sullivans Cove here in Australia, and as a result bottling is very limited and highly prized. Since 2009 the distillery has also teased connoisseurs across the world with its series of Work-in-Progress releases to showcase the progression of their works in the lead up to last August’s release of the flagship 12 Year Old, generating an enormous and loyal cult following in the process, all waiting with baited breath for the final product.

It’s no overstatement then to say that Kilkerran 12 Year Old is one of the most anticipated whiskies of the decade. Like its sister distillery Springbank, Glengyle attracted its incredible following among whisky connoisseurs thanks to an unwavering dedication to doing things properly in an age where more and more distilleries are finding creative ways to release younger and younger whiskies and cut corners to bring costs down, often at the expense of quality. They keep things very natural, using their local water source, Crosshill Loch, throughout the process, from steeping the barley to diluting the whisky at the bottling stage. Their Scottish barley is partially dried over a peat fire, helping to create its unique flavour profile, and they use a traditional Scottish double distillation. When the spirit runs off the Cambeltown style stills you get a light yet complex liquid which is fruity and nutty with what they call a hint of sea breeze. The spirit then matures at its own pace in the finest ex bourbon and sherry casks which give the whisky its richer character with notes of cinnamon, vanilla and honey covered dates. Like any good single malt, when it’s time for bottling they don’t chill filter the whisky, nor do they add any caramel colour to it. Their malt/mash/still men and women have worked so hard to develop all the character in the malt and the last thing they want to do is remove all of those good bits from the final product. The resulting Kilkerran 12 Year Old is the embodiment of the traditional Campbeltown philosophy and the proof is in the bottle… enjoy.

Maturation: Matured for 12 years at nearby Springbank in a mixture of dunnage and racked warehousing. A combination of first and second fill casks are used, split approximately 70% – 30% ex bourbon and ex oloroso sherry casks

Back in the day however, Campbeltown was known as the whisky capital of the world with 34 distilleries operating in and around the town. Despite being on the mainland, Campbeltown’s location at the end of the Kintyre Peninsula means its closest whisky neighbours are actually on nearby Arran and Islay, but it outperformed them both. While the region’s fame endured the entire 1800s, distillery numbers were decimated around the turn of that century thanks to a combination of factors such as improved transportation links to distilleries in Speyside and a decline in quality. This was further compounded by a decline in consumption through the First World War and prohibition in the US, and by 1934 only Springbank and Glen Scotia were still operating in Campbeltown – a far cry from its heyday.

Mitchell’s Glengyle Distillery was established in 1872 by William Mitchell. The Mitchells were the dominant force in Campbeltown’s distilling community during the 19th century, owning a number of distilleries, largely down to the fact that they were a fiery bunch that just couldn’t get along with one another so various members kept breaking off to start their own operations. William was the son of Archibald Mitchell, the founder of nearby Springbank Distillery, and in the second half of the 1800s William ran Springbank Distillery in partnership with his brother John. The family were both distillers and farmers, as was common at the time, and the boys had a quarrel over some sheep which saw William leave Springbank to join his other brothers at Reichlachan distillery before starting up his own venture, Glengyle, just down the road from Springbank. This was in 1872 and like the majority of Campbeltown distilleries, Glengyle suffered greatly during the economic downturn at the beginning of the 20th century. It was bought by West Highland Malt Distilleries Ltd in 1919 then sold again in 1924 for the princely sum of £300, before production finally ceased altogether in 1925.

Despite not producing any more spirit, the distillery buildings remained in relatively constant use right up to modern days, housing a rifle club and later a farmers’ co-op. This meant it stayed the best preserved of all the former Campbeltown distilleries and so made for a very attractive distillery acquisition, with a number of attempts made to re-open Glengyle Distillery in the past. The first was in 1941when it was bought by the Bloch Brothers, then owners of nearby Glen Scotia Distillery, who planned to rebuild and extend Glengyle. Then came the war however and nothing came of the plans. A further attempt was made in 1957 when Campbell Henderson applied for planning permission for a £250,000 modernisation of Glengyle in order to re-open it, but again nothing came of it. Third time lucky for whisky lovers everywhere though because in November 2000, 75 years after Glengyle had last produced spirit, it was announced that the buildings had been bought by Hedley Wright from J&A Mitchell and Co Ltd (owners of Springbank), the great-great nephew of William Mitchell. Springbank had managed to remain in the same family all along and today, along with Glenfiddich and Glenfarclas is one of the few remaining original family distilleries in Scotland. So, almost 150 years after it was established as a result of a family tiff, the ‘new’ Glengyle has come back into the family as a beacon of hope and prosperity for the future of Campbeltown whiskies.