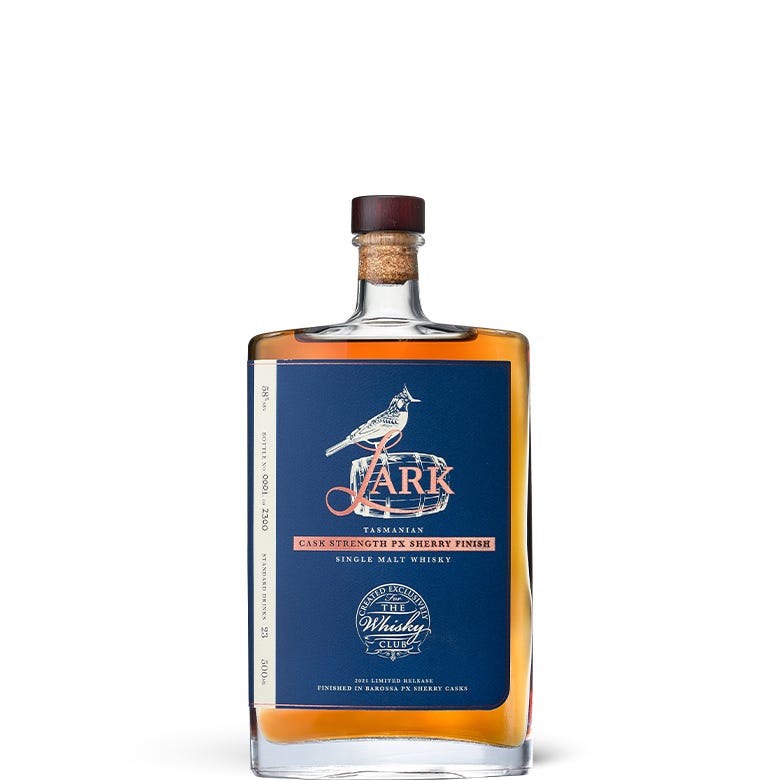 Dripping with luscious jam and layers of crème brûlée, fig and apricot, this is classic Lark finished in PX Sherry. With the regular Lark Cask Strength at $250, for $200 this is one of the best value Larks you’ll find.

Palate Orange and mango are at the forefront mixed with hay and chewy toffee. Spices of nutmeg and cinnamon on top of oven fresh muffins sit well with plum sauce and toasted pastry crust.

wLark’s Classic Cask Strength has been a staple of whisky aficionados since the days you could count the number of distilleries in Australia on your fingers. While the whisky scene has grown and evolved over the last 20 years, so too has Lark Cask Strength. From the early Single Cask releases, winning World's Best in 2009 and 2012 at the World and Chicago International Whisky Awards respectively, and then on to the move from Single Cask releases into increasingly larger marriages of casks, the Lark team has always sought to over deliver on the quality of the liquid they produce. Nowadays we’re so fortunate to see Lark Cask Strength on shelves all around the country with its delicious rich malty notes on top of candied orange and dried fruits.

For this special Club Exclusive, one of the best whisky makers in Australia, Head Distiller Chris Thomson, has done something Lark’s never done before - taken the award-winning Port matured Classic Cask Strength and then treated it to finishing in rich old 300L Seppeltsfield Pedro Ximénez Hogsheads that had held Pedro Ximénez for multiple decades deep in the cellars of one of the Barossa Valley’s oldest vineyards.

These Pedro Ximénez casks arrived at Lark having been decanted just days before, and still contained the thick sticky residue of the fortified wine stuck to the insides of the casks. They were then promptly filled and left in Lark’s tin shed bond stores, well renowned for producing some of the top whisky in the world.

Finishing in the 300L Pedro Ximénez hogsheads has created a mind-blowingly big and supremely juicy single malt that’s absolutely dripping with luscious jammy notes and layers of fig, apricot, and crème brûlée. Fresh off Lark's Gold medal wins for other Seppeltsfield fortified finishes in Muscat (96 points) Sherry (95 Points) at the most recent IWSC (International Wine & Spirits Competition), this PX Sherry finish is the cherry on top and takes Lark to another level being Cask Strength at 58.0% ABV, non-chill filtered and natural colour. This superb collector’s edition is everything you love about Lark, dialled right up to 11. It’s like nothing Lark’s ever released before.

Our special relationship with the distillery has once again allowed us access to some of their best liquid, so don’t miss out. Sign Up Free now to get your hands on a bottle for just $200 while it lasts.

Maturation: Matured in Port casks, then finished in Pedro Ximénez casks from Seppeltsfield

Fast-forward to 1989, and a chap by the name of Bill Lark went on a trout fishing trip in Tasmania’s Highlands with his father-in-law, Max. Enjoying a dram in a park in Bothwell, taking in the sights of the Georgian buildings, barley fields and the Clyde River, Bill questioned why nobody was making malt whisky in Tasmania – after all, not only is the climate perfect, there’s an abundance of crystal-clear water, locally grown barley and peat bogs. It just seemed logical. So, Bill being Bill set out to have a go, but upon applying for a license, discovered Lady Jane’s law was still in place.

Undaunted, he contacted his local MP and before long the law was abolished, allowing Lark Distillery to be formed in 1992, paving the way for the modern Australian whisky industry as we know it. Hot on the heels of Lark came Small Concern Distillery (1992), Sullivans Cove (1994) and Hellyers Road (1999) in Tasmania. Together these distilleries forged ahead and were joined along the way by others including Nant, Overeem, Belgrove and McHenry, and in recent years Old Kempton, Shene, Spring Bay, Fannys Bay, Adams, Launceston and Killara to name only a few of the forty or so (that’s almost as many as Speyside!) distilleries that make Tasmania the whisky isle of the south.

Lark has continued to grow over the years, having progressed from a still found at a garage sale on Bill’s kitchen bench, to a large facility in the heart of one of Tasmanian’s best known wine regions, Coal River Valley, just a stone’s throw from Sullivans Cove Distillery.

While Lark is renowned for using Australian fortified wine casks to deliver a rich, fruity and oily mouthfeel in their whisky, they also have the only official access to a peat bog in Tasmania. Every couple of months Lark drive the 5 hour return trip up to the peat bog, located in the very centre of Tasmania, 730 metres above sea level, and hand shovel the peat into a trailer ready for smoking back at the distillery. Being in the highlands of Tasmania, Lark stock up on peat runs before wintertime because the peat bog would be covered by a thick layer of snow during the coldest part of the year.

One thing that Lark distillery did which was extremely unique was to smoke the barley after it had already been malted. This post malt smoking was done by wetting the barley and then burning the peat below it so when the barley dried out, it would suck in the smoke during the process. For the better part of a decade and a half, Lark relied on a small peat smoker which could only take 90kg of malt at a time and would take 8 hours for the barley inside to dry out. With the increased production coming out of the distillery, Lark also increased its peated malt capacity by creating an engineering masterpiece and first of its kind peat smoker. This increase has taken the peated malt production from just 180kgs (two runs) to up to 2 tonnes in a day.

They brew their own wash on site, using Tasmanian grown barley, which is fermented for 7 days before being run through the stills. The distillery features two 1800 litre wash stills and two 600 litre spirit stills which run 7 days a week. Looking at the size of the stills in use by Lark today, it’s no wonder the minimum 2700 litre size specified by the Distillation Act of 1901 made it impossible for anyone to be in the business back then...

The new make spirit is then broken down from 72% to 63.4% ABV with ultra-filtered water and transferred to 100 litre Australian Port, Apera and 200 litre American Bourbon oak casks where it’s left for anywhere between 4 and 10 years before being released to the public.

Each of the locally sourced casks is checked for quality by the Master Distiller Chris Thomson, who allocates each parcel of casks to a release. After maturation, the casks are married together ensuring each release of Lark whisky fits within their house style, or are tailored for limited releases, like our Whisky Club Exclusive releases.

Bill and Lyn Lark’s efforts pioneered Australia’s whisky industry and ignited a craft distilling boom, that 30 years later sees 300+ distilleries dotted across the country, producing some of the best spirits, fom multiple categories, in the world. 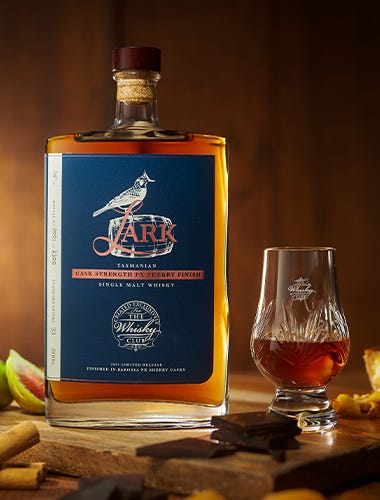 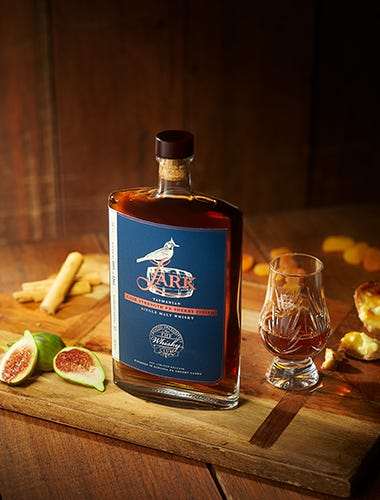