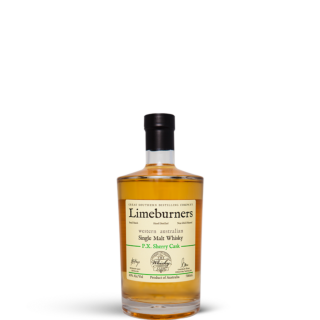 You asked and we delivered. In this cracker of a month, we brought Members our first Australian featured whisky: the Limeburners PX Sherry Cask Single Malt, one of the most remarkable releases in Australian whisky history from the most awarded distillery in the country.

Nose Fresh and floral on the nose with sweet raisins, almonds and dark chocolate.

Finish Medium long finish with malt and honey notes and a just a touch floral.

This is a whisky of firsts – not only is this The Whisky Club’s first Australian whisky but it’s the first ever Limeburners P.X. Cask release.

Like all true craft operations, this whisky has been handmade using traditional Scotch techniques. All ingredients are locally sourced and distillation is performed by Limeburners’ two copper pot stills; an 1800 litre wash still and a 600 litre spirit still; a very far cry from the giant stills of Glenlossie or Glenfarclas! This double matured whisky was initially matured in American Oak casks for six years before a second 12 month maturation in PX sherry casks specially selected from family reserve stocks in old third generation Swan Valley wineries. The Swan Valley has long been famous for producing stellar fortified wines from old vine stock brought in by early European settlers and Limeburners were very quick to establish relationships with their distinguished viniferous neighbours that would grant access to increasingly rare fortified barrel stocks.

Working in collaboration with the Club, the team in Albany brought together nine specially selected P.X. casks to produce this exclusive limited release, a first for Limeburners and a first for us. It’s Australian whisky history unfolding before our eyes, so make sure you’re a part of it.

At The Whisky Club, we love Scotch and we’ve also ticked off most of the world’s prime single malt territory over the years, but there’s been an elephant in the room for some time and we just can’t ignore it any longer. Australian Whisky. It’s taken the world by storm over the past five years, the quality of the whisky’s astounding and winning the hearts of whisky connoisseurs across the globe.

The Aussie industry’s secret to success is a very simple mantra, followed dogmatically by all concerned: to make the best whisky possible. It’s this quality over quantity approach that’s seen some of the world’s tiniest distilleries make single malt whiskies that equal and in many cases better the best that Scotland and Japan can offer.

Australian whisky has come a long way in only 27 years. Our unique climate and quality ingredients combine to produce quality spirits of world renown, but the question has to be asked – why does Australia have such a short whisky history?

Well to answer that question we need to hit the rewind button back to 1838. Tasmania alone was home to no fewer than 16 legal distilleries, and countless illegal ones. The population was growing, they certainly liked a drink (many had come over as convicts after all) and the industry boomed. At least, it did up until the point Lady Jane Franklin, wife of Tasmanian Governor John Franklin, said “I would prefer barley be fed to pigs, than it be used to turn men into swine”.

Thanks for that Jane.

Next thing laws were passed and all the distilleries were forced to close. With whisky production now illegal, Tasmania went without a local dram for over 150 years, but Cascade Brewery didn’t seem to have any trouble securing barley to turn men into swine… but that’s the way it goes when you’re mates with the guv.

Fast-forward to 1991, and a chap by the name of Bill Lark went on a trout fishing trip in Tasmania’s Highlands with his father-in-law, Max. Enjoying a dram in a park in Bothwell, Bill questioned why nobody was making whisky in Tasmania – after all, not only is the climate perfect, there’s an abundance of crystal-clear water, locally grown barley and peat bogs. It just seemed logical. So, Bill being Bill set out to have a go, but upon applying for a license discovered Lady Jane’s law was still in place. Undaunted he contacted his local MP and before long the law was abolished allowing Lark Distillery to be formed in 1992, paving the way for the modern Australian whisky industry as we know it today. Hot on the heels of Lark came Small Concern Distillery (1992), Sullivans Cove (1994) and Hellyers Road (1999) in Tasmania, Bakery Hill (1999) in Victoria and in 2004, Limeburners in Western Australia.

Looking for a new challenge, Limeburners was founded by lawyer Cameron Syme in a business incubator at the Albany Small Business Centre. Distillation kicked off in 2005 with a mission to make the best whisky in the world and to this day Limeburners remains true to this ambition, operating under a strict continuous improvement methodology aptly named “in pursuit of excellence”. The next big milestone came in November 2007 when production moved to a purpose-built distillery facility on the edge of the stunning Princess Royal Harbour in Albany.

The first Limeburners Single Malt was released in 2008 and was promptly awarded the Bronze Medal at the International Wine & Spirits Competition in London. When Western Australia’s first ever single malt sold out in a month, Cameron knew he was onto something. Production was ramped up, and despite now being double what it was in the early days, demand still far outstrips supply, hardly surprising because Limeburners is one of the most sought-after whiskies in the country.

Not content with making some of the world’s best whisky, Cameron has since opened two more distilleries in Western Australia. Established in 2015, The Margaret River Distilling Company is home to the “Giniversity” and specialises in gin and vodka, while the 2017 The Porongurup Distilling Company is home to Tiger Snake Sour Mash Whiskey. Today the entire portfolio includes a wide range of spirits including single malt whisky, sour mash whiskey, gin, vodka, pisco, brandy and liqueurs.

An incredible trophy cabinet I’m sure you’d agree, and The Whisky Club is over the moon to be partnering with Limeburners to bring you our February 2018 whisky – a truly unique offering that’s a first for Limeburners and set to become a piece of Australian whisky history.