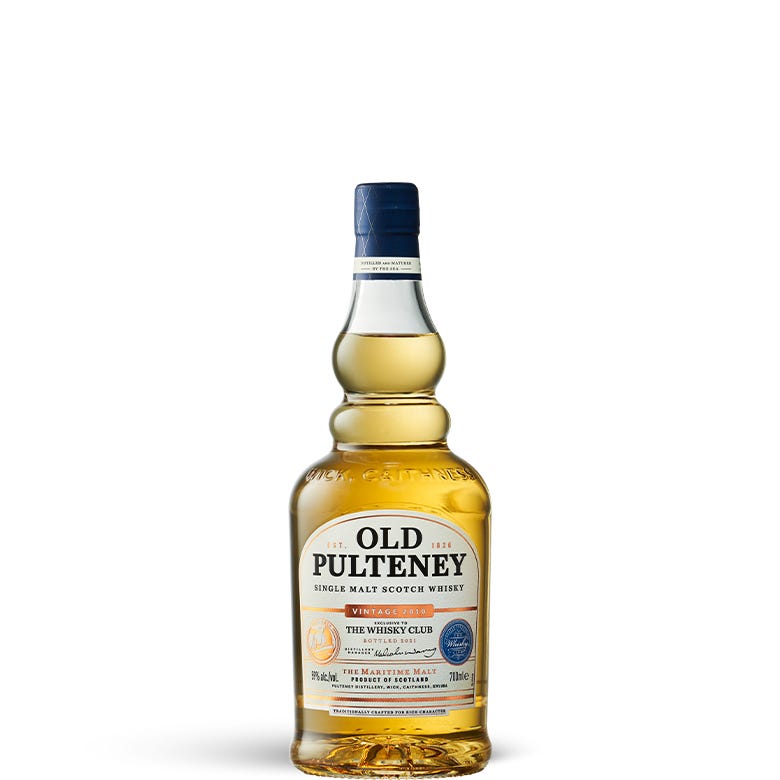 An unprecedented chance to taste one of the world’s most highly awarded and revered craft distilleries in all its pure unadulterated glory, at cask strength. Let the warm wave of silky salted caramel wash over your palate with this crazily delicious seaside single malt.

Palate A viscous wave of rich butterscotch and delicate oak spices followed by a waxy fruitiness.

Finish Long and warm with a vanilla creaminess and a rich salted caramel accent.

Until now, savouring an Old Pulteney straight from the cask was an honour that only Aussies that have visited the distillery have had the chance to experience. That’s about to change.

The Old Pulteney 2010 Cask Strength, created exclusively for The Whisky Club, offers an unprecedented chance to taste one of the world’s most highly awarded and revered craft distilleries at 59% ABV cask strength.

Distillery Manager, Malcolm Waring, is very pleased with this whisky:

This mouth-watering whisky showcases the Old Pulteney style so well, you can just imagine yourself enjoying a dram of the Maritime Malt in the coastal sea air of pristine Northern Scotland.

It’s the first time we’ve ever seen an exclusive Vintage from Old Pulteney in Australia. Limited stocks remain, so don't miss out. Not yet a Member? Sign Up Free now to get your hands on a bottle while stocks last.

In the 1800s, the port town of Wick in the far north of Scotland was a bustling fishing harbour and the epicentre for the country's herring trade. With the influx of keen fishermen to the area, Sir William Pulteney of the British Fisheries Society commissioned civil engineer Thomas Telford to build not only a new harbour on the Wick River, but a new fishing town as well. The sailors soon had somewhere to rest their weary bodies when they came ashore; by 1810 Pulteneytown was established on the southern banks of the river, a close neighbour to Wick, but remaining under its own administration until the two towns merged in 1902.

Sailors, as we know, tend to be a thirsty bunch. So, it wasn't long before local distiller James Henderson saw the opportunity to move on from his distillery on his family farm in Stemster, around 25km from Pulteney, and establish a distillery in the town. As a result, in 1826, the Pulteney Distillery, one of the northernmost distilleries on the UK mainland, was established.

During Pulteney's formative decades, the ships returning to port adorned with their sparkling silver hauls of herring and carrying exhausted, thirsty fishermen in their droves, supplied the Pulteney Distillery with plenty of customers for their liquid gold. This trade earned Wick its reputation as the town of silver and gold – herring and whisky. During this time, the maritime character of the whisky was moulded; transport of barley and finished whisky on the sea was not a mere romantic notion, it was a necessity, as road links were non-existent.

While Wick and Pulteney had a population of just a few thousand, come summer and peak fishing season, the numbers could be three or four times as many. Legend has it that the town of Pulteney could consume some 500 gallons (that’s over 2,200 litres) of whisky a day during peak times. Serving that many sailors required multiple pubs; 23 in fact, which gave Pulteney bragging rights over the mere 22 in Wick.

Pulteney Distillery remained in the Henderson family’s hands until 1920 when it was sold to blender John Watson & Co. Just two years later, the town of Wick was declared 'dry', and no sales of alcohol were permitted. The temperance movement had moved into town from American origins and managed to convince the local council to take a vote on becoming a dry town. It turned out that the drinking public sealed their own fate when only 40 of the 600 townsfolk bothered to turn up to vote - they didn’t want to leave the pub - and sent the town dry with a prohibition period that lasted until 1947- twice as long as prohibition in the USA.

Of course, the consumption of alcohol did not cease in Wick; it went underground, or drinkers just moved outside the 3-mile restricted zone around the town There are stories from those years of big burly farmers enjoying tea poured from big silver pots into dainty china cups well into the evening and being quite merry upon exiting the "tea shop".

In 1924, the distillery was sold once again, this time to John Dewar & Sons, then brought under the DCL fold, but they were unable to recover from the market downturn due to the introduction of the prohibition law and closed the doors were closed in 1926, and a restrictive covenant placed on the use of the building, meaning they could not be used for production or maturation of spirits.

Pulteney Distillery lay dormant for two decades, the buildings owned by various people who used them for various purposes. They were even used as the town morgue for some time – you could say there’s more than one kind of spirit in Old Pulteney!

Hiram Walker & Sons injected some much-needed funds into the distillery, allowing them to undergo a significant renovation in 1958, but this came at the cost of in-house floor maltings. Once again, their ownership was short-lived; they moved the distillery on to its seventh owner, Allied Breweries, in 1961.

For its near 40-year ownership period, Allied Breweries sent the majority of the liquid from the Pulteney Distillery to blending vats, though Gordon & MacPhail released a small amount of 8 Year Old Single Malt. By the time they sold to Inver House Distillers in 1995, the distillery was again severely needing repairs.

The modern era of Pulteney Distillery, and the Old Pulteney whisky brand, focuses on celebrating the unique character of the distillery and how its location influences the whisky it produces.

The finest barley is milled on-site with a classic Portius Mill that’s over 100 years old. Enough is kept on hand to keep production going throughout the winter months when the roads close. The barley is combined with pure, soft water sourced from Loch Hempriggs, a few miles from the distillery, and a dried yeast rather than the usual wet yeast. The fermentation tanks are split between 60-62 hours and 115 hours which creates two different styles that come together to create the signature Old Pulteney style.

The spirit is distilled in uniquely shaped pot stills. The pot stills feature large boil bulbs that are nearly the size of the base of the still and have a flat top to increase reflux. Additionally, the spirit still features a purifier pipe and coiled lyne arm. The result? A deliciously oily and fragrant spirit. The boil bulbs also inspired the bulbous neck in the Old Pulteney bottle design.

Pulteney is also one of only a handful of distilleries in Scotland that still use worm tub condensers. There is much work required to maintain them, but they add significant body and depth to the whisky. Constant rainfall and cooler temperatures also allow for more control over the spirit temperature, which can affect the character of the final product.

Around 60% of the distillery’s output is reserved for Single Malt release, and 95% of this is matured in American oak ex-Bourbon casks. But there’s something magical about the maturation process at Pulteney. The low-temperature amplitudes and high humidity affect maturation in the five seaside warehouses. The casks are meticulously rotated throughout the buildings by the distillery manager Malcolm Waring as they age. They breathe slowly, allowing for the natural character of the spirit to develop over many years without being overpowered by the wood. Knowing when to rotate and move the casks is an art, as each sub-climate within the warehouses ages the spirit differently. Waring says “It takes a long time to get to know how your warehouses are performing and what they can do and what they bring to whisky. And it's all about the play of the warehouses for me and how that's done.”

With nearly 200 years of history in Wick Harbour, it is hard to imagine the seaside town without its beloved distillery. It truly is the Maritime Malt. 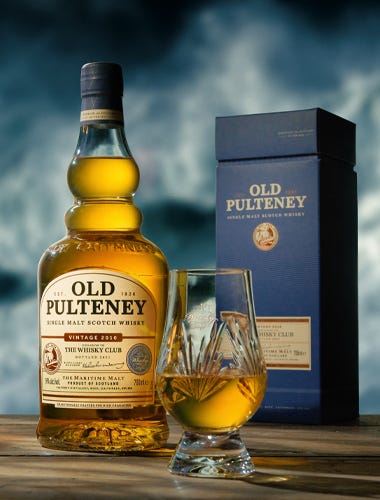 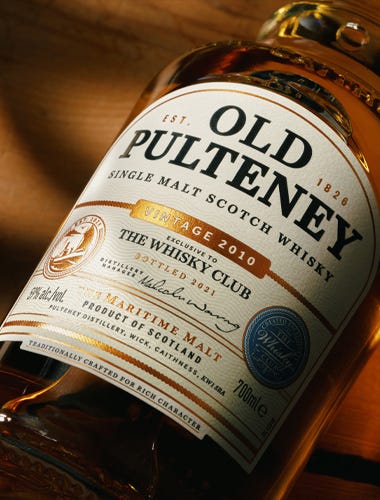