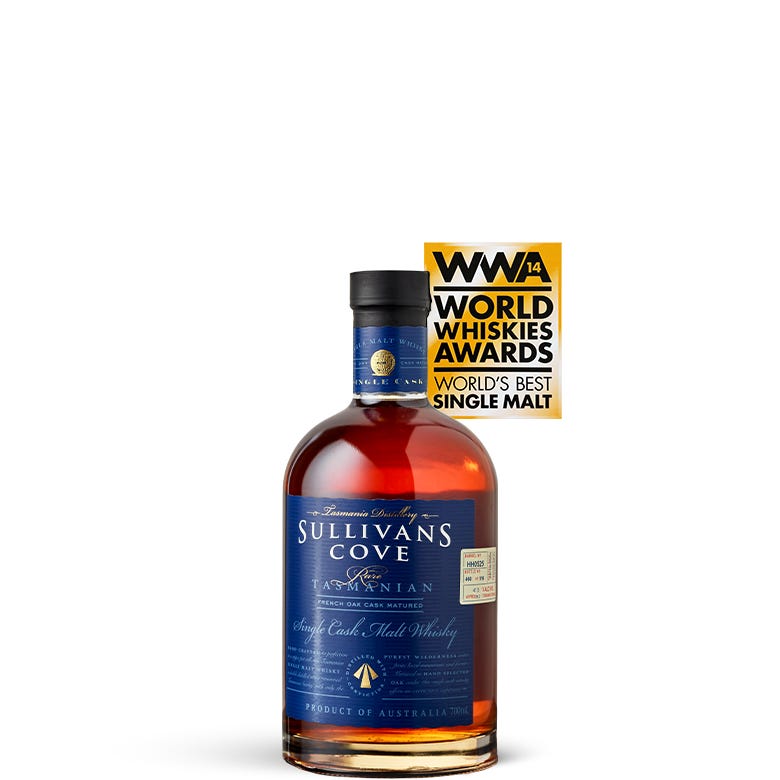 The whisky went on sale for $160, people bought it, and it was good. As to be expected.

But then, something extraordinary happened.

In 2014, HH0525 was entered in the World Whiskies Awards, where it was crowned 'Best Single Malt Whisky in the World'. The rest, as they say, is history. It was the first whisky not from Scotland or Japan to take out this prestigious title, and the win catapulted Australian whisky into the whisky-verse carving the way for every craft distillery in the country.

Most of the bottles had already been sold (and probably consumed) before the awards. In fact, Sullivans Cove themselves only had three bottles left when the win was announced. As a result, the precious last few remaining unopened bottles demand price tags of up to $25,000.

But we’ve got your chance to add one to your shelf for just $525. There’s only one bottle, and you must enter the ballot to win the chance to purchase it.

Sullivans Cove French Oak Cask HH0525 brings layer upon layer of dark chocolate with cinnamon, orange peel, hazelnut, toffee, and fruit cake. But if you’re lucky enough to get the bottle, would you drink it?

Established in Hobart's historic gasworks site in 1994 - just two years after Lark - Sullivans Cove is Tasmania's oldest commercial whisky distillery. The build of a brandy-type still was commissioned in northern Tasmania, and upon completion, it was trucked to Hobart, installed, and in no time they were making a bit of everything; whisky, brandy, gin and liqueurs. Known as Myrtle, the same still is used today.

Unfortunately, in those early days, the reputation of Sullivans Cove was, shall we say, poor... mostly thanks to eager distillers bottling the whisky too early. The business failed and was sold to new owners with a new vision in 1999. Having seen the success of Lark Distillery, Bill Lark was brought in as distillery manager, along with his mate and Lark employee, Patrick Maguire.

Maguire went on to purchase the distillery in 2003, becoming owner, Head Distiller and General Manager. In 2004 moved the operation to its current location in Cambridge, not far from the airport and around a 15-minute drive from the original location in Sullivans Cove. The new site was much better suited for producing large amounts of whisky, with plenty of room to stack barrels. The decision was made to concentrate on making the best single malt whisky they could, and Patrick set about reworking everything the distillery did, from production to packaging.

The work paid dividends, and by 2007 the whisky world's spotlight started pointing in Sullivans Cove's direction with their American Oak picking up awards including Best Other Malt (whiskies outside of Scotland) at the World Whiskies Awards. But things really got serious when, in 2014, then Sullivans Cove Marketing Manager and soon-to-be The Whisky Club co-founder Bertie Cason selected French Oak Cask HH0525 to be entered in the World Whiskies Awards. The rest, as they say, is history, with HH0525 being crowned 'Best Single Malt Whisky in the World'. It was the first whisky not from Scotland or Japan to win, and the award shot not only Sullivans Cove, but the whole Tasmanian whisky industry, onto the world stage.

This was followed up in 2018 when American Oak Single Cask HH0351 won 'World’s Best Single Cask Single Malt' at the World Whiskies Awards, and again in 2019 when French Oak Single Cask TD0217 won the same award, making them Australia's most awarded whisky.

For a full list of the awards won over the years, see here.

Sullivans Cove only ever uses 100% Tasmanian malted barley which is brewed by highly experienced local brewers, then double distilled to around 70% ABV and diluted to 63.5% ABV before being filled into either 200-litre American oak ex-Bourbon barrels, or 300-litre French oak ex-Tawny barrels. These are then left to mature for many years - typically between nine and eighteen years until they're deemed ready to be bottled. Bottling is done on-site, with a small white tag on the side telling you exactly what's in the bottle.

In 2017, Sullivans Cove released the first Australian single malt whisky aged entirely in a white wine cask. They also started using the word 'Tawny' instead of 'Port' on their labels when referring to Australian fortified wine. 2018 was a big year for new releases, including Sullivans Cove XO Brandies which have also won major global awards, their first barrel-aged gin, and the Old & Rare and Cask Variations series.

Today, Sullivans Cove is at the forefront of whisky innovation in Australia, moving away from any form of flocking or filtration in Single Cask whiskies, improving the sustainability of packaging, and ongoing experimentation in both production and cask types to create even better whiskies in the future. With their new generation of keen young distillers bringing a true passion for Tasmanian whisky, Sullivans Cove has cemented its place in Australian whisky royalty. 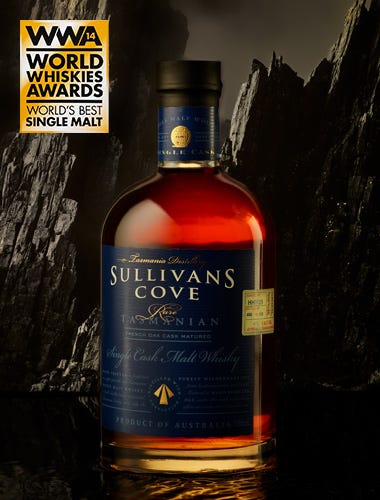 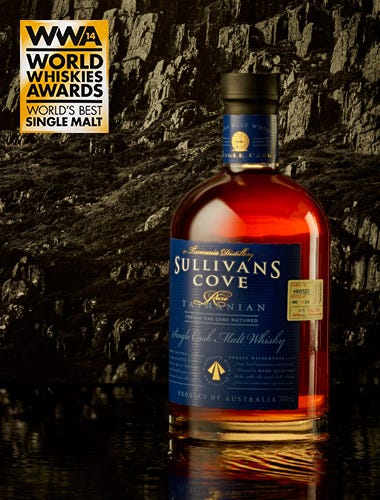