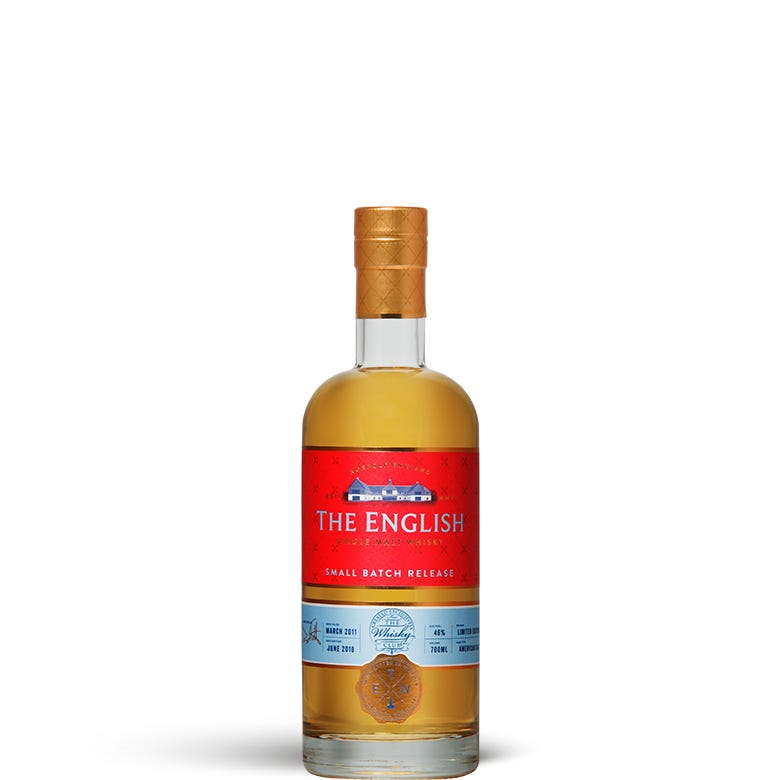 Our Members got an absolute belter in August with The English Single Malt Small Batch Release For The Whisky Club.

Nose Sweet, light and elegant with vanilla and milk chocolate notes followed by crisp citrus and a medley of tangy tropical fruits, a delightful mix of kiwi, papaya, mango and passion fruit.

Palate Beautifully soft and warming. The vanilla and tropical fruits combine beautifully with the milk chocolate notes, perfectly balanced with a hint of macadamia nuts

First a word about size. Despite being the largest distillery in England, this is a tiny operation and very comparable to our own industry. At 50,000 lals/annum (litres at 100%ABV/annum) St. George’s produces a similar amount of whisky to Sullivans Cove and Lark and as a result the whisky is truly made by hand in every sense of the word… and every last drop counts.

Production is led by chief whisky maker David Fitt. A brewer by trade, he joined St. George’s to work under Iain Henderson’s wing, learning all he could about the art of whisky from one of Laphroaig’s and indeed Scotch whisky’s most revered names, until the beckoning of retirement became too much for Iain. The student in turn has become master, and David was named Icons of Whisky 2017 Distillery Manager of the Year in recognition of his passion which shines through in the quality of his whiskies.

David prefers a very short cut of spirit, which gives a clean and crisp texture to the new make spirit. He’s given a free run at the distillery, letting his creative juices flow, and with the casks stored on site, he can keep a watchful eye – and nose – on their development. To date, near 3,000 casks have been laid down, in both peated (the Laphroaig influence lives on) and unpeated expressions. By far the majority of casks are ex-Jim Beam casks, shipped from America as whole casks – not a cheap way of doing it by any means, but one they firmly believe to be money well spent. A smattering of sherry and wine casks have also been used, David keen to experiment with different casks in a rolling program of cask trials.

The whisky is batch made by hand, the old fashioned way, with no help from computers by the way of automation as is common in larger operations and is bottled by hand too. Needless to say, chill filtering and artificial colours are dirty words at St George’s Distillery. This is the pointy end of craft whisky folks.

We’ve teamed up with David to showcase his best work to Australia’s biggest community of whisky lovers – and it’s spectacular. David selected ten ex-Jim Beam casks, all filled in March 2011, to marry together and bottle exclusively for The Whisky Club in this very special release. The result is the scrummiest single malt we ever did meet; (dangerously) irresistible, bursting with tangy tropical fruits and layers of vanilla ice-cream and milk chocolate.

Un-chillfiltered, natural in colour, and 100% flavour, this is as good as craft whisky gets.

Established in 2006, St George’s Distillery – also known as The English Whisky Company – is the first whisky distillery to be built in England in over 120 years.

What’s that? England’s first whisky distillery in 120 years? That’s right, believe it or not, the English were making whisky way back in the 1800s with distilleries scattered around London, Liverpool and Bristol, the last of which to close was London’s Lea Valley Distillery, which swapped to gin production in 1902 before burning down in 1903 – probably a message from the whisky gods.

Fast forward a century and enter James Nelstrop, a man with plan and scion of a 600-year-old grain farming dynasty. A high achiever, James enjoyed a spectacular career in agriculture, highlights including introducing direct drilling to Australia, overseeing rural reconstruction in Russia, bringing the first centre pivot to England and turning a worn out veggie farm in Lakenheath into the first whole Countryside Stewardships Scheme Farm for organic sheep and cattle, all to encourage the wild bird population.

Somewhat of a workaholic, at age 60 with no intention of retirement whatsoever, he added a final first to the list. Faced with excess barley from his crops and an abundance of fresh water running through his property, James a passionate whisky drinker just like you and I, did what any of us would do in his position… he built a distillery.

In establishing the first new whisky distillery in England in more than 120 years, James is celebrated as the father of modern English whisky, much like our own Bill Lark here in Australia. Now sadly deceased, his obituary notes that “what pleased him even more (than establishing St. George’s) was the opening of several other English whisky distilleries, which gave him a sense of achievement in being the founder of an entire national industry.”

James and his son Andrew set off on a mission to learn all they could, researching distilleries in Scotland, Ireland and Wales (sounds just like our kind of field trip), and returned to Norfolk to lodge their plans for a micro-distillery in 2005. Customs and Excise said no to anything smaller than 1800 litre stills, dashing any hopes of keeping the operation at the micro-distillery level, so after things were scaled up, approval for the distillery was granted in January 2006 and thus St George’s Distillery, home of The English Single Malt was born.

Timing is everything, and as luck would have it, Laphroaig distillery manager and all round whisky legend Iain Henderson was just about ready to retire, but was coaxed into joining the team for one last hurrah, and by December 2006 the first 29 barrels of English whisky were laid down. The obligatory visitors’ center featuring a whisky shop and distillery tours followed shortly afterwards in August 2007, culminating in December 2009 with the release of the first legal English whisky in over 100 years.

Producing some 150,000 bottles a year, the English Whisky Company is today leading a spirited resurgence in English whisky. We’re honoured and delighted to be working with this fantastic team to bring you a history-making example of their finest work, created and bottled exclusively for The Whisky Club.

Water Source: The Breckland aquifer, drawn from a borehole on site