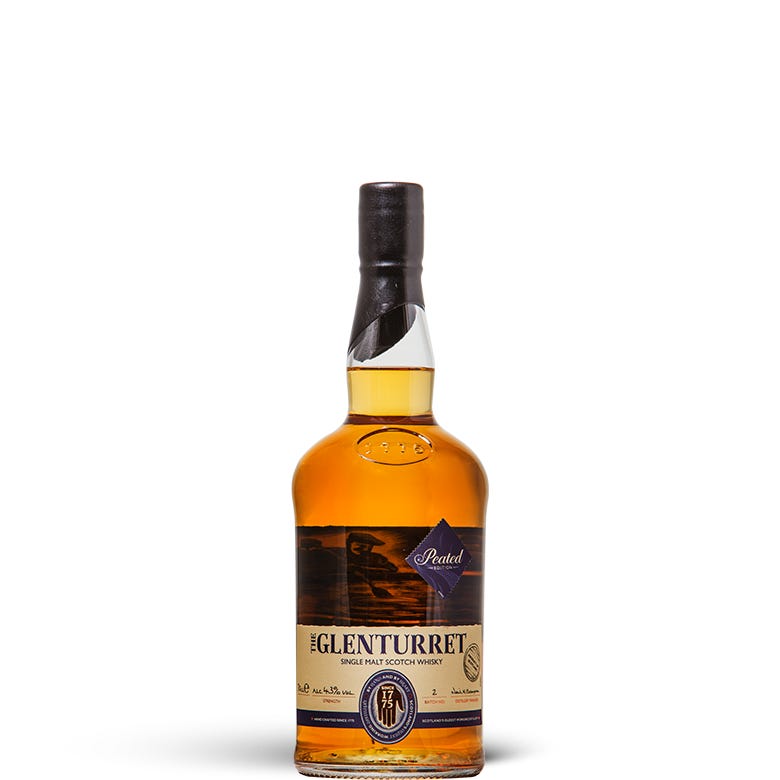 September’s whisky of the month came straight from Scotland’s oldest working distillery to Australia’s biggest club of whisky lovers, and we were thrilled to present the most authentically traditional handcrafted Scotch whisky you’re likely to ever drink.

Despite the long history and changes of ownership, Glenturret has remained a truly traditional craft operation, giving us a glimpse and a taste of the past. Each aspect of the production process is done by hand, in the traditional manner, so much so that Glenturret today tastes almost exactly as it did 240 years ago.

To produce quality whisky, you need not only a decent plan but quality ingredients. To that end Glenturret sources high quality barley from Simpsons Malt and the purest water from the Loch Turret, about 6km from the distillery. Malted barley is ground in an original grist mill and then fed into the last remaining hand-operated mash tun in Scotland. This process gives far greater control of the mash, resulting in more sugar extraction and ultimately more alcohol and flavour.

Like most truly hand made things, nothing is rushed and everything takes its time. In the case of the Glenturret though, there’s good reason for it. The next step in the process sees the Glenturret’s Douglas Fir wash back ferment the wash for up to 100 hours. This is longer than your typical fermentation time, and adds to The Glenturret’s distinctive fruity characteristics. Time is taken through the distillation of the spirit too, with a very slow still run, creating an unmatched lightness and sweetness. It takes generations of experience to hone these techniques, and this same experience has taught the stillmen to cut the spirit by eye (much of this automated these days) using their hand operated spirit safe. The stills themselves feature unique designs, with a tall wash still helping to create a very light spirit. And of course, Glenturret’s pot stills are made of hand beaten copper, but we wouldn’t expect anything less. Once distilled, the heart of the run gets pumped to the filling store, where it’s cut with Loch Turret water then filled into ex-Bourbon and ex-sherry casks where it rests ‘til matured to perfection.

A different beast to Islay peat which you may or may not love, the sublime Glenturret displays a wonderfully subtle smokiness that’s smooth and inviting, making way for freshly baked brownies, and a sweet yet slightly salty, smoky taste and a soft, lingering finish.

Due to the Famous Grouse connection, there’s been very little official Glenturret single malt available over the years, and we’re extremely lucky and excited to have this in Australia for the first time ever, exclusive to the Club. Enjoy!

This month we’re headed back home to the Highlands to visit Scotland’s oldest distillery, the ever delightful and singular Glenturret. Practically a living museum, today this tiny distillery is the most authentically traditional distillery in Scotland and it’s a testament to its unique character that it’s stood the test of time.

Established in 1775 under the unusually cool name The Hosh (Gaelic for ‘foot’ and its place of origin– shame it’s not still called that!), it was renamed Glenturret in 1875 in celebration of its centenary. Initially running as an illicit still, it was licenced in 1818 by then owner John Drummond and endured a revolving door of proprietors until it was mothballed in the 1920s due to tough economic conditions as a result of WW1 and Prohibition. All was not lost and hope and was just over the horizon for the granddaddy of Scotch whisky.

Having narrowly survived a three-pronged attack from der Führer, Comrade Stalin and Emperor Hirohito, not to mention nuclear annihilation, the world was feeling pretty buoyant in the 1950s. This good mood called for Scotch and the Scots were all too pleased to oblige. To Glenturret’s great fortune it was purchased and resurrected in 1959 by James Fairlie, a visionary whisky lover hell-bent on producing whisky in as traditional a manner as possible, just like in the very old days. Going into it from the outset with a plan to showcase traditional whisky production methods, he wanted to keep the distillery a small, farm-style operation and after a swift refit, Glenturret was in full swing again in 1960.

James’s vision was to produce whisky “By Hand and By Heart” and that’s exactly what he did. The Glenturret’s second incarnation was that of a true craft distillery, pioneering craft production principles, many decades before it was “cool” to be craft. Sensing the impending whisky boom including whisky tourism, Glenturret’s rebuild included a radical new feature at the time – a visitors centre. This was only the second such centre to be set up and predates even that of Glenfarclas, who didn’t open their famous visitor centre until 1973.

Glenturret further shot to fame in the early 2000s when current owners Edrington Group spent a whopping £2.2m to transform the site into one of Scotland’s premier whisky destinations, The Famous Grouse Experience, and you’ve guessed right, Gleturret is a key ingredient in Scotland’s favorite blend – which is why original single malt bottlings like this are very rare from the small distillery, made even more special because this is a distillery that goes to pains to make sure their traditional farm style highland malt tastes the same as it did 240 years ago. It’s truly an honor to present this as our whisky of the month this September.

No Glenturet story is complete of course without a quick mention for Towser the Mouser, a champion cat who kept the rodent population under control from 1963 to 1987, catching an estimated 28,899 mice over her lifespan. Such a tremendous haul didn’t go unnoticed, and after official observation she made it into the Guinness Book of Records, and naturally a bronze statue was erected in her honour at the distillery.