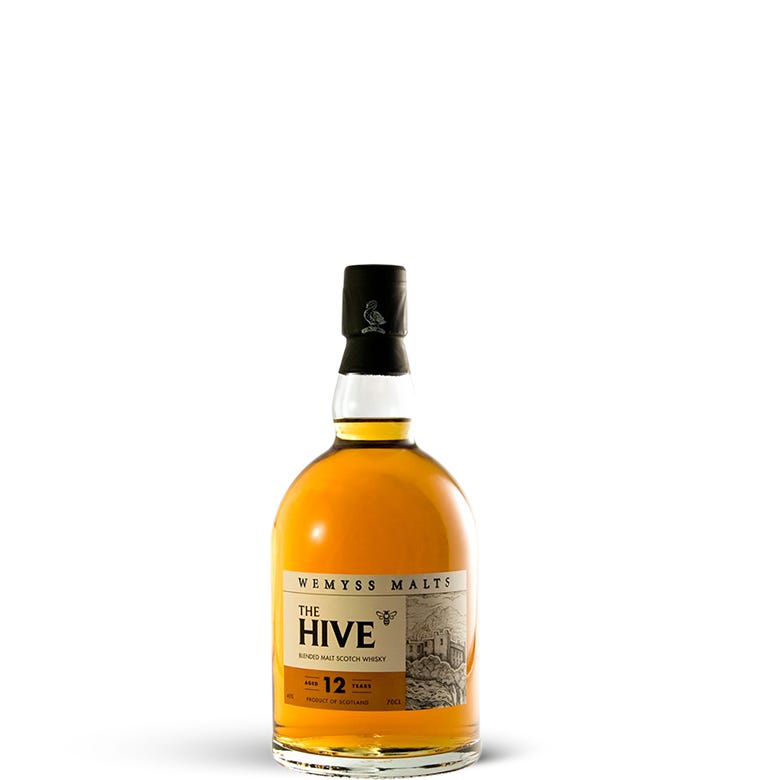 In creating The Hive with the master blender, the Wemyss family wanted a whisky that had the honey, vanilla and fresh fruit flavours that truly represented the Speyside region.

Artfully balancing 16 single malts before introducing the signature malt, The Hive is a delicious example of a Speyside whisky. With a rich and luscious nose, the sweet honey and citrus notes come to the fore and slight woodiness developing over time that beautifully balances this out. The whisky is matured in both fresh and refill bourbon and sherry casks for a rich, sweet and spicy dram with the emphasis on honey, a rounded spice gently mellows into waxy smooth finish.

Wemyss Malts is a boutique independent bottler of single cask and blended (vatted) malt whiskies and is this year celebrating it’s 10th anniversary. Wemyss Malts is owned by the Wemyss family, one of the old families of Scotland, with a rich history which including the Scottish Wars of Independence, the Jacobite uprising, coal mining, and of course, whisky.

Wemyss (pronounced “Weems”) is the ancient Gaelic word for caves and stems from the rocky outcrop on the Firth of Forth on which their family home, Wemyss Castle, sits. Looking back towards Edinburgh, the castle has been the family seat for over six centuries and the family’s links to the whisky industry date back to 1824 when John Haig built his distillery on family land in Fife. Even today, barley from the Wemyss Estates is prized by many of the leading distillers and now supplies the Wemyss family’s latest venture, Kingsbarns Distillery. One of Kingsbarn’s founders incidentally is Tasmania’s Greg Ramsay, now responsible for the range of New Zealand whiskies that you may have seen around.

The company was established in 2005 as the independent bottling arm of the Wemyss family’s drinks portfolio which includes Domane de Rimauresq in Provence, Lord Elcho Blended Scotch Whisky, Kingsbarn Distillery and Darnley’s View Gin. Drawing inspiration from their winery in Provence, where blending is an essential part of creating fine wines, Wymess Malts broadened the traditional Scottish model of independent bottling involving predominantly single cask releases, and set about creating a range of blended malts that reflect the various regions of Scotland.

Wemyss Malts wanted to take whisky lovers on a journey through the whisky regions of Scotland, so in creating their award-winning blended malt range, up to 16 different single malt whiskies are expertly blended together before introducing the “signature” malts to give a distinctive profile of each region. Spice King with hot peppery coastal notes, is from the Highlands & Islands; The Hive, representative of Speyside, with sweet honey vanilla notes and Peat Chimney with the smouldering smokiness of Islay.

Under the expert guidance of industry expert Charlie Maclean, Wemyss Malts source casks from distilleries across Scotland for their single cask range. Each cask that is chosen for bottling is representative of the best characteristics of that region, and this strict selection process means they continue to offer an interesting and wide range of whiskies from open and closed distilleries. The selection panel then delve into the flavour profile of these casks to ensure that the name given to each whisky reflects the unique aromas and flavours found within the bottle.