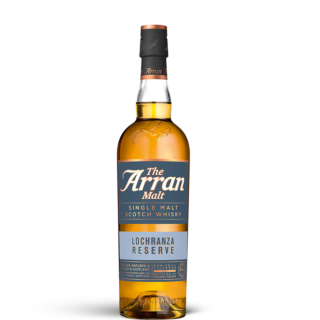 Debuting in Australia with the Club, this exclusive shipment of The Arran Lochranza Reserve was our hugely popular September malt.

Finish Lingering and delicate with sweet oak and spice, softened slightly by a layer of milk chocolate

James MacTaggart is the Master Distiller at Arran and since taking over the job in 2007 he’s brought his simple but effective philosophy of “a contemporary whisky, a traditional distillation” to bear with exceptional results. Arran uses the traditional methods of distilling including wooden washbacks for fermentation and copper pot stills designed to their exact specification. No caramel or artificial colourants are tolerated and all Single Malts are non-chill filtered, which as we all know means they’re natural in pigment and exactly the way whisky should be.

The distillery uses two types of barley, Optic and Oxbridge, both selected because of their superior yields of fermentable sugars for the distiller to convert into alcohol. The malted barley is put through the distillery’s grist-mill before being mashed, yielding around 13,000 litres of wort per batch, before being fermented in the distillery’s Oregon Pine washbacks. There’s an age-old debate as to the use of wooden washbacks vs. stainless steel with traditionalists arguing that the residue build up in the wooden washback adds more flavour to the whisky. You be the judge.

The Arran Single Malt is double distilled in the traditional Scottish style, first in the wash still, followed by the spirit still. The liquid is boiled in the wash still by means of internal steam fins, and driven off as a vapour that passes through the tall, swan neck of the still. This vapour then passes through a condenser where it is brought back to a liquid form, known as Low Wines. The Low Wines are collected in the receiver from the first distillation at around 23% ABV.

The Low Wines are then filled into the spirit still for the second distillation. Again, the liquid in the spirit still is boiled by internal steam fins and after 30 minutes foreshots begin to appear in the spirit safe. Foreshots appear at 74% ABV but contain too many volatile compounds to be collected as spirit so these are diverted into the Low Wines/Feints receiver. After a further 20 minutes spirit known as the heart or middle-cut of the run can be collected at an average strength of 68% ABV. This is reduced with local water to 63.5% ABV and is then filled into oak casks for maturation.

Arran are currently filling about 75% first fill bourbon barrels, 15% first fill Sherry Hogsheads and about 10% refill Sherry Hogsheads and Butts. Interestingly, until 2007 a proportion of the casks were stored off the island at nearby Springbank Distillery in Campbelltown due to a lack of room at the distillery caused by legal restrictions preventing the extension of the existing warehouses. But as we know, problems lead to innovative solutions and the distillery now has a revolutionary storage warehouse on site that allows greater storage capacity and easier access to barrels. Today there are six warehouses onsite at the distillery, a mixture of dunnage, racking and palletised, and there plans to build further warehouses as production increases.

The Arran Lochranza Reserve is a classic edition of the Arran Malt created specially by James MacTaggart to highlight the lighter side of Arran’s vibrant island character. Bottled at 43%, the Lochranza Reserve emphasises the delicious, sweet fruit notes, which are the hallmark of the Arran distillery and makes for the ideal Spring whisky for our Club.

Maturation: Matured initially in first-fill American Oak ex-Bourbon casks. A small portion (15%) is then re-racked into first-fill sherry hogsheads for a period of 6-9 months and subsequently married back in to the original batch.

The Arran Distillery is one of the few remaining independent distilleries in Scotland and an exciting new force in the Scotch whisky industry. Founded in 1995 near Lochranza on the Isle of Arran, it’s also the first legal distillery on the island in 157 years, following the closure of Lagg in 1837. Of course that’s not to say that a little distilling didn’t already take place on the island in that time – like most good Scots the islanders have a healthy disregard for the law and it’s believed that at one stage there were about fifty illegal distilleries on Arran. Indeed since the late 1700s Arran’s majestic rolling hills and glens have provided the perfect cover for illicit distillers to produce ‘uisge beatha’ away from the watchful eyes of the Customs men, and the reputation of ‘Arran Water’ quickly spread to the mainland where it was regarded as amongst the best in Scotland.

Now a century and a half later, Harold Currie, former Managing Director of Chivas Brothers and House of Campbell, decided he’d bring the magical Arran Water back to life and fulfil his dream of building his own whisky distillery following his illustrious career in the whisky industry. Aside from Arran’s historic reputation, the case to choose the island as the location for his distillery was overwhelming, given its pristine waters and unique climate. Arran benefits from the warmth of the Gulf Stream, while the Kintyre peninsula provides a degree of shelter from the prevailing westerly winds, perfect for whisky maturation. It also doesn’t hurt that the island is situated off the west coast making it an easy hour’s drive from Glasgow to the ferry, and today the distillery welcomes around 55,000 visitors a year keen to discover the new Arran Water in person.

And it’s not just human visitors the distillery has attracted over the years: just after building started on the distillery it was halted immediately to allow a pair of Golden Eagles nesting in the hills above Lochranza to hatch their young for a couple of months. As a ‘token of their appreciation’ the eagles provided a fly past during the official opening ceremony and in turn they now adorn the Arran logo. And if rare eagles weren’t enough, for centuries a white stag has had worship status amongst the islanders, with good fortune apparently meeting all those who spy the noble beast. On the opening morning the distillery manager and head distiller spotted the white stag grazing in the meadow overlooking the distillery, bringing good fortune ever since, or so the Arran folk will tell you.

Arran distillery’s construction was completed in the summer of 1995 and the first middle-cut of spirit ran through the spirit safe at 14.29pm on 29 June 1995, marking the beginning of a legend. It was another three years before the first whisky was ready for bottling and on 25 July 1998 none other than Ewan McGregor opened the first cask of Arran Single Malt Scotch whisky (legally) distilled on the island for almost 160 years. McGregor did well out of the deal with the distillery sorting him out with a cask of whisky by way of thanks for his visit.

So there you have it, your whisky this month brought to you by eagles, deer and Ewan McGregor.

On to the serious stuff. Over the next eight years the distillery brought out a variety of NAS cask finish expressions while building a loyal following for their signature creamy, fruity malts. The distillery’s first 10 year old was released in 2005 and it remains the heart of the Arran range. The 14 year old was added in 2010 and the core range was completed in 2015 with the launch of their 18 year old. The core range is complemented by an exciting and ever-evolving range of limited editions including Machrie Moor, the island’s first peated whisky, various vintage expressions and the now iconic Devil’s Punchbowl, inspired by the glacial hollow Coire na Ciche on the north-east coast of Arran. In a cunning move, the distillery also became a patron of the World Burns Federation and as such is the only whisky distillery able to use the image and signature of Robert Burns on their packaging.

Stills: 1 wash and 1 spirit (two new stills (one wash and one spirit) are being installed in 2016)