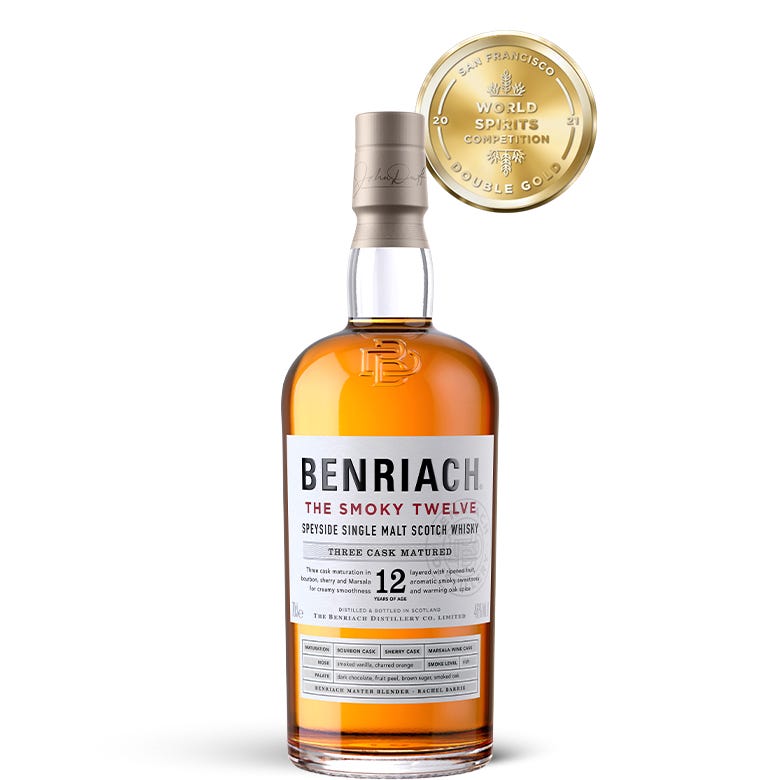 Say hello to your new favourite whisky: the Double Gold medal winning Benriach The Smoky Twelve, a whisky so mightily moreish they should have called it the "Pringles Edition". Pure decadence, and exclusive to the Club.

Finish A divine finish with dark chocolate and a madeira sweetness, with orange and lingering smoke.

Introducing a succulent, rich and balanced whisky with just the right amount of smoke and matured in an eclectic collection of casks from around the world: Benriach The Smoky Twelve.

Fresh from collecting Double Gold at the San Francisco World Spirits Competition, and perfectly crafted by none other than the legendary Master Blender Dr Rachel Barrie, the brand new Benriach The Smoky Twelve is a rare combination of both peated and unpeated malts, matured in Bourbon, Sherry and Marsala casks, then brought together to create a magical smoked masterpiece.

This is the first time Benriach has used Marsala casks outside of its highly prized Single Cask range, and we’re glad that they finally have, because these casks add so much depth and complexity to the whisky, alongside the Sherry and American oak casks we know and love.

Peated to 45ppm (parts per million) with Scottish Highland peat and aged for a full 12 years, the peat’s broken down in the cask over the years and comes across as very approachable - even for a non-peated whisky drinker. With luscious oak spice, sticky sweet peat, charred oranges, brown sugar and dark chocolate, The Smoky Twelve reveals a full house of flavour with every sip.

Orders for Benriach The Smoky Twelve have now closed. Sign Up free now to grab our next exclusive releases.

The story begins back in the mid-1870s when former publican and GlenDronach manager John Duff was about to embark on a wild ride of whisky success. A visionary and dreamer, Duff built the impressive Glenlossie distillery in 1876. He enjoyed success and growth as the whisky market went from strength to strength, prompting him to look to overseas opportunities. A move to South Africa in 1888 was short-lived thanks to the president of the country’s mission against anything British, and unfazed by a similar fate to his efforts in the USA he moved back to Scotland and in 1894 partnered with George Thomson and Charles Shirres to build Longmorn Distillery.
Their malt was a hit with blenders, so after investing £20,000 into Longmorn, Duff bought Thomson and Shirres out of their shares, hoping to reap the rewards for himself. It was boom time, after all, so he decided to go all-in and punted a further £16,000 to build Benriach (meaning ‘speckled mountain’) Distillery in 1898. Located in north Speyside on the site of the old Riach farm, he made the most of the mineral-rich waters of the Burnside Springs, deep underground below the distillery.
It seemed like a good idea at the time. The whisky industry was booming, and conveniently Benriach and Longmorn were able to be joined by a private railroad on which ‘The Puggy’, a steam locomotive, used to transport coal, barley, peat and barrels. A fantastic set up by all accounts in the golden years of whisky making, but sadly the good times weren’t going to last, and what seemed like a good idea at the time ended out ultimately becoming Duff’s downfall.
You see Benriach was just one of at least 33 Scottish distilleries established in the industrial boom of the late 1890s to cater for consumers’ ever-growing thirst for the golden nectar, 21 of which were also in Speyside… 100 points if you can guess what happened next. Yes, it all came crashing down in 1899 when Pattison’s, one of the major buyers at the time, went into liquidation in what is now known as ‘The Pattison Whisky Crisis’. An all-too-familiar tale of boom and bust.
The fires under the Benriach stills were soon put out, the distillery closed after only two years, though its malting floor remained in use by Longmorn. It was an unbelievable 65 years until the spirits flowed through the stills once more, when Glenlivet Distillers Ltd bought Benriach in 1965, only to sell to Seagram’s in 1977. And so it continued as a second set of stills was added in 1985.
In 1994, BenRiach (note the new capital R in the name) became a brand unto itself with the release of the first-ever BenRiach 10 Year Old Single Malt. Growth ensued up to the point Seagram’s was acquired by Pernod Ricard in 2001 and the distillery incredibly wound back operations to just three months of the year, only to be subsequently mothballed in 2002.
However, come 2004 the tables finally turned, and whisky history was made when the distillery was acquired by an independent consortium led by industry legend Billy Walker, backed by Wayne Kieswetter and Geoff Bell – a couple of whisky mad South Africans (funnily enough, given Duff’s experience with that country). The BenRiach Distillery Company Limited was born and BenRiach won its independence.
Not keen to sit around, the guys turned BenRiach into somewhat of a cult distillery and expanded their portfolio in 2008 with the acquisition of the GlenDronach Distillery (another link to Duff!) followed by the Glenglassaugh distillery in March 2013.
Under Walker's watch, BenRiach continued their long-standing tradition of producing three styles - both peated and unpeated whisky (one of just a handful of Speyside distilleries to do so), as well as triple distilled whisky. We soon saw a wide range from BenRiach including a number of peated releases with names like Curiositas, Temporis, Importanticus Fumosus, Septendecim and Authenticus.
In 2015, The BenRiach Distillery Company won the Global Whisky Distiller of the Year at the Icons of Whisky Awards, a win that caught the attention of American giants Brown-Forman, who scooped the company up the following year for a record sum of £281 million, the three distilleries are now under the watchful eye (and nose) of Dr Rachel Barrie.
The distillery showed off a new look in late 2020, with a complete rebrand taking place including a new logo, dropping the capital R from "BenRiach", new bottle and label designs, and a few tweaks to the lineup. In keeping with the modern new look, the naming convention has been simplified, with the unusual Latinate names gone. BenRiach Curiositas is now Benriach The Smoky Ten, for example.  The 12 Year Old has a new flavour profile and is now called Benriach The Original Twelve, and has been joined by a new expression in the range, Benriach The Smoky Twelve.
Benriach is famous for its incredibly wide range of whiskies. Creativity is the name of the game, with not only the three different styles of malt in production, but some rather experimental casks in use including Pedro Ximénez, Madeira, Dark Rum, Tawny Port, Claret, Burgundy and Rioja. Additionally, it’s one of only two remaining Speyside distilleries to still do on-site floor maltings. Their stills are traditional onion-shaped copper pot stills, but interestingly don’t have the boiling reflux bubble in the neck.
Putting the eclectic collection of casks from around the world to good use, Dr Rachel Barrie and the team continue to produce some of the richest, most multi-layered whiskies in Speyside. 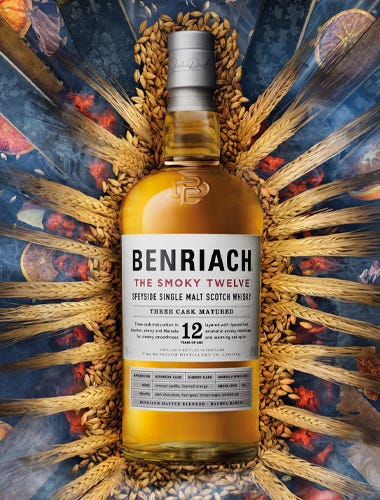 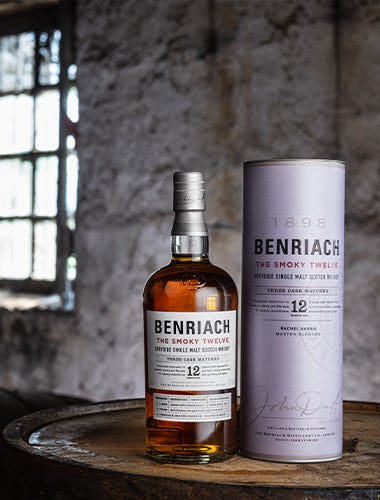