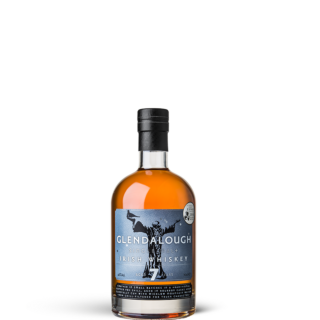 One of the most remarkable Irish whiskies ever to come to market, Glendalough 7 Year Old is a small batch independent bottling from this tiny distillery in Co. Wicklow.

Nose Rich and sweet, a touch of cinnamon and a hint of citrus fruits – orange zest, lemon infused with vanilla ice cream. A touch of fresh floral notes like meadow flowers.

Palate Silky, velvety smooth with orange zest tones to the fore and rich creme brulee and dark chocolate notes. Lashings of cinnamon and white pepper spice keep it interesting, followed by beautiful robust malt and butterscotch mixing wonderfully as the warmth expands through

Finish Luxurious and lingering, the spicy, sweet notes elegantly marry on the finish and stay an eternity. Everything you’d expect from a perfect sipping whiskey.

Now you may wonder how a distillery founded in 2011 could possibly have a 7 Year Old whiskey, let alone a 13 Year Old and this is where some real Irish magic comes into play, something quite unique in the whisky world. Many of you will recall our March whiskey, the Greenore 8 Year Old, made by Cooley Distillery. Aside from making whiskey for their own brands, Cooley made vast amounts of whiskey that it sold under “private label” deals to independent bottlers. Internationally recognised as the finest single malt in Ireland, these whiskeys are in very high demand, even more so now that Beam Suntory, who bought Cooley in 2012, put a stop to “private label” production.

The crew at Glendalough have somehow managed to get hold of a bit of this liquid gold, which has been matured under their stewardship before being cut to 46% with Wicklow water to produce what is arguably one of the most remarkable Irish whiskies ever to come to market.

Maturation: Matured for 7 years in first fill, Wild Turkey, American oak ex-bourbon casks, within a facility that was designed by the team’s mate “Tom the Carpenter”, following a lengthy evening sampling the initial product and debating about “whiskey making being ab

Ireland’s first craft distillery, Glendalough, was founded by a couple of mates in 2011, with the aim of recapturing “Ireland’s lost heritage of great spirit production” – and the results so far haven’t disappointed.

Founded by Barry Gallagher and Brian Fagan, along with Gary McLoughlin and Kevin Keenan, the team behind the distillery has a wealth of spirits industry knowledge. Gallagher and Fagan are drinks analysts working in the finance area of the industry, while McLoughlin and Keenan are advertising specialists who’ve spent years working with some of the best brands in the market.

The distillery has taken a forward-thinking approach to production and has so far produced a sterling range of liquors with overwhelmingly positive results.

In a sense the lads looked back to go forward and started off making poitín (pronounced pot-sheen), a traditional drink that the Irish are pretty keen on. In essence, poitín is new make spirit made from barley and has evolved over the centuries into whisky as we know it today, mainly through the introduction of oak casks for ageing. Records dating as far back as 584AD show that Irish monastic settlements like Glendalough were the birthplace of distilling in Ireland, predating Scottish clergyman Frair John Cor’s efforts by almost 1000 years. Whisky, along with the bagpipes, are Ireland’s gift to Scotland, much like the Kiwi fruit is Australia’s gift to New Zealand.

During the 18th and 19th centuries, there were more than 200 licensed (and many unlicensed) stills operating throughout Ireland, most of which were producing poitín for local consumption. As regulations were tightened, the vast majority of those stills were closed down – and now Glendalough is seeking to bring back part of the pioneering spirit that saw Irish whisky evolve into the wonder that it is today.

Spurred on by a great local reception for their poitín, the company decided to purchase their current base of operations in Glendalough village, County Wicklow. Not surprisingly, the site was chosen for its superb water, drawn from the nearby Wicklow Mountains and Glendalough’s patron saint, St Kevin, can be found on every bottle that comes through the distillery.

While Glendalough makes poitín and even gin, it’s long term plan has always been the revival of Irish single malt whisky. Earlier this year the distillery released it’s single malts on an unsuspecting, and now ever grateful, whisky world with a huge splash at two of the world’s “grand slam” blind tasting competitions, the San Francisco Spirits Awards and London’s Spirits Masters. The 13 Year Old was named Best Irish Whiskey and Best Single Malt Irish Whiskey in San Francisco, while the 7 Year Old, our whisky this month, backed it up with a Master in London.

Capacity: 100000 litres of alcohol per annum