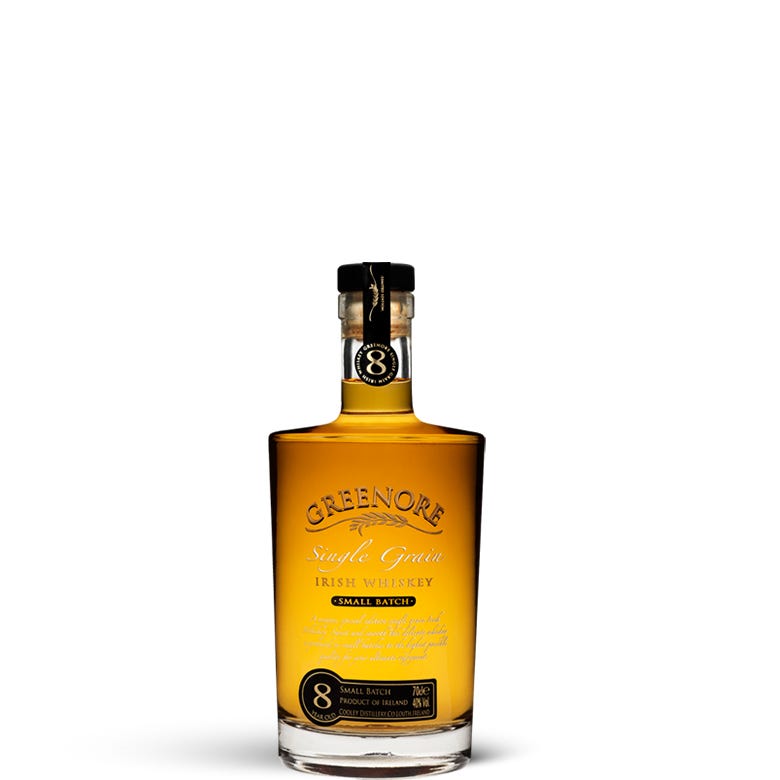 What better way to celebrate St Paddy’s Day than with the first single grain whiskey ever released in Ireland? Greenore 8 Year Old Single Grain Irish Whiskey did the trick.

Finish Medium long finish with vanilla and oak shining through

Greenore is an extremely unique whiskey, being the first single grain whiskey ever released in Ireland. The grain make-up of this whiskey is 93% corn and 7% malted barley, and it’s aged for 8 years in American oak ex-bourbon barrels. The corn used to make Greenore comes from the USA and lands at a deep water port in the nearby village of Greenore, hence the name. The classification of single grain may at first seem confusing, as there are clearly two types of grain used, but is based upon it being a grain whisky from a single distillery, in the same way as a single malt is defined. The whisky is also made even more unique by virtue of its production in a continuous still rather than a pot still. This method resembles that of bourbon production, and yet while many first timers may expect the flavour profile to then also slightly resemble bourbon, it doesn’t even faintly come close in any, way shape or form. Indeed Greenore is a whiskey incomparable to any other whiskey on the market in aroma and taste, with a production technique so unusual that it is the only one of its kind anywhere in the world. Whatever the guys at Cooley were trying to achieve, they nailed it. The Greenore 8 Year Old Single Grain is now about to be rebranded as ‘Kilbeggan 8 year old Single Grain’ and Greenore will no longer exist, making this whiskey a collector’s item over the coming years.

When John Teeling founded Cooley Distillery in 1987, it was the first new whiskey distillery to be set up in Ireland in over 100 years. Teeling had conceived the idea in a pub in 1971 while still a student at Harvard after completing two papers on the decline of Irish whisky – and like many successful entrepreneurs felt that he could do a better job than the current lot. His grand vision was to resurrect many of the mothballed brands and distilleries that had fallen silent over the preceding 100 years. Following the Irish War of Independence (1919 – 1921) and Prohibition in the USA (1920 – 1933) Irish whiskey had declined dramatically from a prominent global position in the 19th century to a position where its sales equalled just 2% of Scotch whiskey sales. Tragically, by 1970 the number of Irish distilleries had fallen to just two, down from over 100 in 1886. Come 1974 the industry was then monopolised as Seagrams sold Bushmills to United Distillers of Ireland (later becoming Irish Distillers) and this monopoly remained up until Cooley’s establishment in 1987.

Teeling set the Cooley Distillery up at Ceimici Teo Distillery in Dundalk, a former government distillery producing medicinal grade alcohol and later, with the support of the locals, he resurrected the old Kilbeggan Distillery in the Irish Midlands. Incidentally, at 256 years old Kilbeggan is the oldest licensed distillery in Ireland. Armed with the facilities to progress his vision, Teeling then set about reviving many of the historic brands and distilling techniques of Irish whiskey. At the time older Irish brands like Jamesons’s and Bushmills were seen as heavier and stronger than Scotch, so Teeling innovated by producing a pot-stilled single malt and a lighter, sweeter blend. These two products, Tyrconnell Pure Pot Still Single Malt and Kilbeggan Premium Blend, were to become his flagship brands and are still enjoyed around the world today.

It wasn’t smooth sailing for Teeling though, who he had to fight off advances from Irish Distillers who sought to buy and mothball his operation. He also faced the usual cash flow issues that new distilleries inevitably face but was helped along by supporters including Moet Hennessy. Eventually he prevailed, continually innovating and adding exciting new products to his rich portfolio including Connemara Peated Single Malt Irish and Greenore Single Grain. The Connemara was particularly exciting in that it’s a peated Irish single malt and despite all the peat in Ireland, there’d never been such a product before. In recognition of their excellent work, the Cooley Distillery was named World and European Distiller of the Year at the 2008 International Wine and Spirit Competition and their brands have won more than 300 medals over the years.

The Cooley Distillery currently produces 1.5 million litres of pure alcohol and fills approximately 12,000 200L ex-Bourbon casks annually. It distils both grain whiskey in column stills and pure malt whiskey in traditional copper pot stills and unlike most other Irish distilleries, operates a double distillation process. All Cooley whiskeys are matured in ex-Bourbon casks, with the exception of whiskeys finished in special casks, such as the Tyrconnell Port, Madeira or Sherry finishes or the new Connemara Single Malt Sherry Finish. Their stock matures both at the distillery in Cooley and in the 200 year old granite warehouses of the old Kilbeggan distillery.

In 2012 Cooley Distillery was sold to Beam Global, which was subsequently bought by Suntory in 2014. This news bodes well for the whisky adventurists among us as the new owners are committed to continue Teeling’s pioneering vision of innovation and experimentation and we can expect some really interesting releases in years to come, not least a whiskey matured in green tea casks!