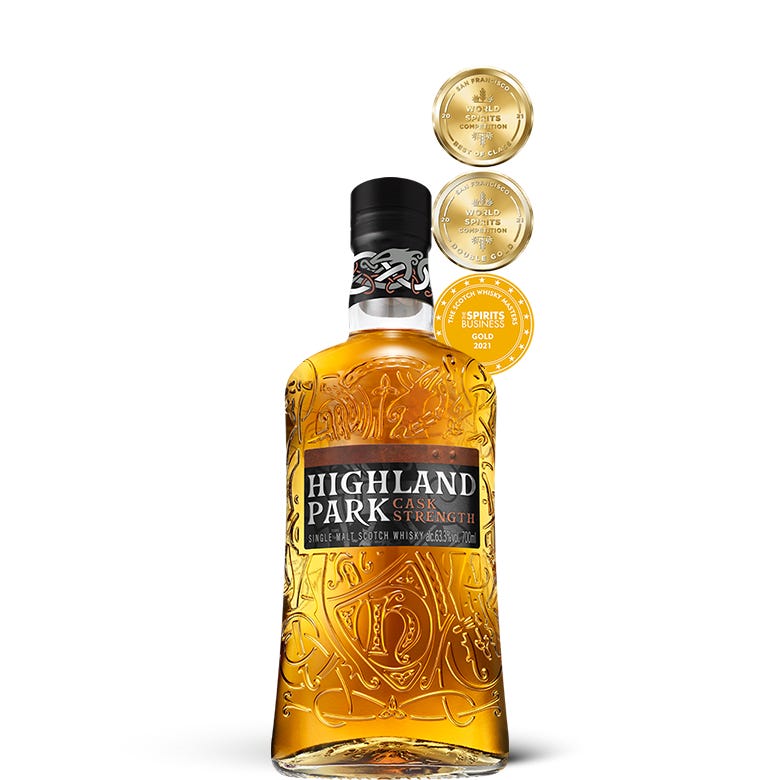 The multi-award-winning whisky from Scotland’s northernmost distillery is here. Get excited for the colossal Highland Park Cask Strength Release No.1. At 63.3% ABV, it brings the very essence of Highland Park’s signature flavour profile, while amplifying it up to 11.

Nose Sweet and smoky on the nose with aromas of violets and ripe vanilla pods gathering a wave of aromatic peat smoke.

And love it they do, with the whisky picking up a multitude of medals including Best Distillers’ Single Malt Scotch, No Age Statement (Best in Class) along with Double Gold at the prestigious San Francisco World Spirits Competition 2021, and Gold at the Scotch Whisky Masters 2021.

Bottled at Natural Cask Strength 63.3% ABV without added colour or chill filtration, this robust and intense whisky brings together aromas of violets and ripe vanilla followed by a wave of sweet peat smoke. Rich and full bodied on the palate with soft toffee, heather honey and freshly grated nutmeg alongside sun-ripened citrus fruits, before leaving with a long and lingering finish of warm Crème Brûlée and exotic Eastern spices.

Sold out at the distillery upon release, we’ve been waiting patiently for it to arrive on our shores and it’s finally here.

Orders for Highland Park Cask Strength Release No.1 have now closed. Sign Up free now to get your hands on our upcoming releases.

While the Orkney’s locals had been honing their skills for a few centuries, it wasn’t until 1798 that an official distillery opened on the islands. But who it was that actually founded it is something still argued about in pubs today. It was either Magnus Eunson, church officer and butcher by day, and illicit distiller and whisky smuggler by night, or the honourable farmer David Robinson. What we do know, is that the distillery’s ornate iron gate has the year 1798 written on it and that’s when the distillery went into legal production, regularly paying duty on the spirit produced on site, and in 1826 Highland Park became one of Scotland’s first distilleries to get a license to make whisky.

Soon after the distillery got its license it was taken over by Robert Borwick until 1840 when he handed over the reins to his son, George Borwick. The distillery just kept pumping out liquid year on year without too many changes until 1869, when George’s brother James took over. Keen to cash in, James attempted to sell the distillery, and while he found no takers, he managed to get William Stuart of Miltonduff fame onboard as a partner. From here, things started to pick up and Highland Park was soon exporting to mainland Europe, and as far as India by the mid 1870s. Stuart brought in his business partner, former manager of The Glenlivet, James Grant during the year 1885.

Ten years later James Grant acquired the whole distillery and proceeded to give Highland Park a complete makeover, doubling the production capacity by extending the number of fermenters and adding two more stills.

Over the next few decades production flourished, so much so that it caught the attention of Highland Distillers, who were buying up distilleries to supply the blended whisky brands owned by their close trading partner Robertson & Baxter, and in 1937 they purchased Highland Park distillery.

For many years, everything Highland Park produced found its way into blended whisky, but in 1979 Highland Distillers decided to try something new and released Highland Park Single Malt 8 Year Old Whisky. The success was strong and in the early 1980s they went on to release 12 and 18 Year Old expressions. Highland Park went on to create such a cult following that the decision was made to switch to Single Malt, rather than supply the blends.

A visitors’ centre was opened in 1986 and in 1999, the Edrington Group along with William Grant and Sons acquired Highland Distillers, and the distillery and visitors’ centre underwent a £2 million renovation. A 30 Year Old whisky was introduced to the market in 2003, and in the early 2010s the distillery decided to focus on its Viking heritage, kickstarting it off with the Warriors series.

Perched on the south edge of Kirkwall which is the biggest town on Orkney and surrounded by 26 big dunnage warehouses, Highland Park is Scotland’s northernmost distillery, pipping Scapa by a mere few kilometres. The distillery itself is made up of beautiful stone buildings, which were built for being functional but also the fact there isn’t any trees on Orkney due to the 160km/h winds that can rip through the Islands.

The site is dominated by two pagodas perched on top of the malting house, often with smoke billowing out of them, as Highland Park is one of the few remaining distilleries to do their own malting. 20% of all Highland Park’s barley is malted on-site, and then kilned using local Island peat smoke. The peat comes from Hobbister Moor just a few kilometres away, and is different to mainland or even Islay peat, in that it’s composed of mainly sphagnum moss and heather. This broken-down plant matter brings through a different flavour profile in the finished whisky. You’ll find a Highland Park whisky is fragrant and aromatic, with a distinctive heather note to it. Only using 20% peated malt in the mash leaves the end-result at around roughly 12-15 ppm, so while your typical Highland Park whisky isn’t exactly a smoke bomb, it does offer that little something extra.

In 2004 a decision was made to cease the use of ex-Bourbon barrels, and the distillery turned to a Sherry seasoning program, allowing the distillery more control over the casks they were bringing in, and in turn the flavour profile the casks were lending the whisky. Be it European oak or American oak to create a profile of rich and sweet or dry and spicy, you can always catch those signature dried fruits alongside the smoked heather on the majority of younger Highland Park whiskies.

Highland Park offer a large range of whiskies, with age statements ranging from 10 to 50 Years Old, along with No Age Statement releases, and limited edition small batch special releases that allow their whisky makers to experiment with the influence of different cask types and peat levels. 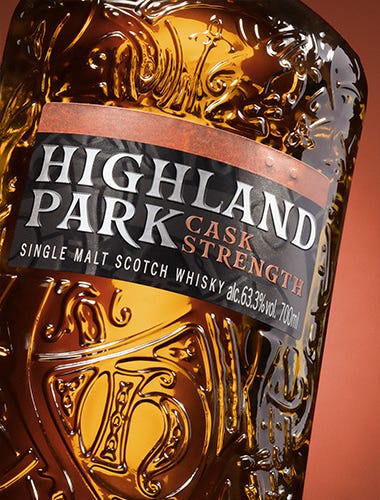 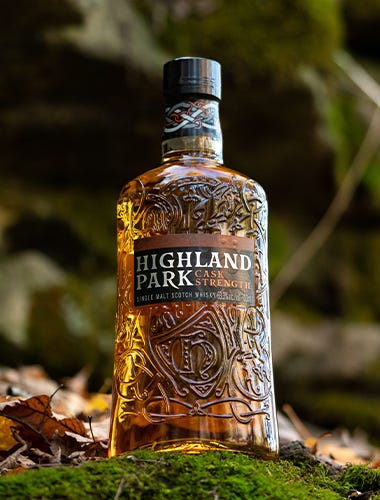