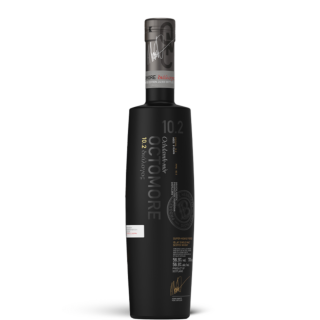 Finish The oak and smoke linger after all the remining notes fade, each one clear and crisp. Before they go head to head, there is honey and orange notes, and hints of clove that set off the finish.

Originally a Travel Retail exclusive release, Australia's airports’ loss is our gain, as we’ve managed to snare the some of the last remaining stocks of Octomore 10.2 in the country.

Made with 100% Scottish grown Optic and Oxbridge barley, peated to a ‘softer’ 96.9ppm and distilled in 2012, Octomore 10.2 spent four years in fresh American oak ex-Bourbon barrels, before being moved to incredibly rare Sauternes casks for another four years. Bottled at 58.2% ABV, you can expect to encounter smouldering peat and ripe, syrupy fruits, jelly babies and toasted oak with a long, honeyed finish.

Don’t miss your chance to Add In the mega Octomore 10.2 this April. Be quick: Sign Up Free now to get your hands on a bottle while stocks last.