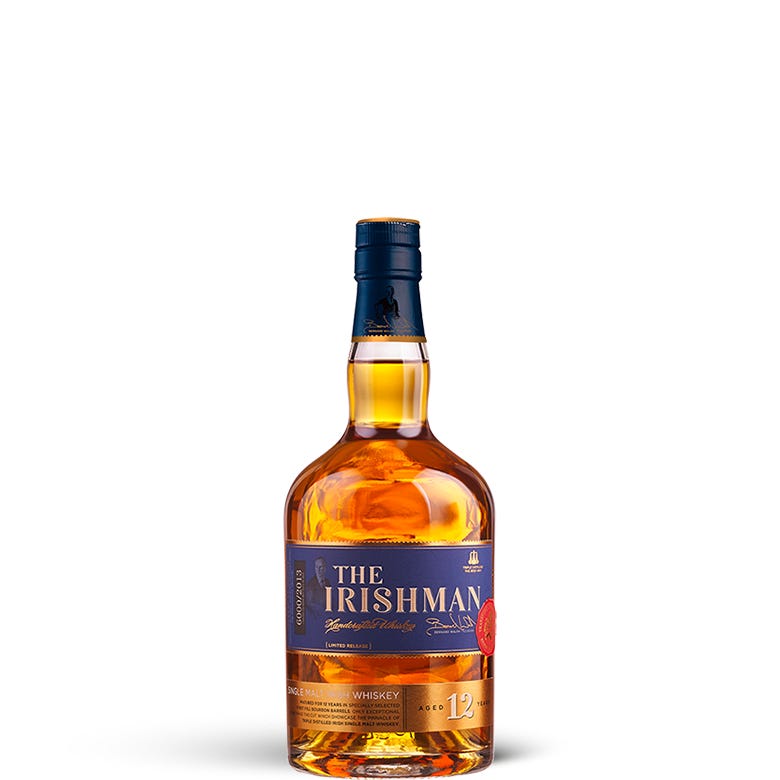 We had a fantastic St. Patrick’s Day with The Irishman 12 Year Old, the first single malt from the Midleton Distillery...

Nose Incredibly full aroma with sweet spicy notes of vanilla, malt, cinnamon and a hint of clove. All balanced with apples and pears, some charred wood and freshly cut hay.

Most months the whisky information we cover is pretty straightforward, but in this instance it takes an intriguing turn. Thanks to their independent contract with Midleton Distillery (Jamesons, Green Spot, Redbreast, Powers…) Walsh have been bottling whiskey since 2007 under The Irishman and Writers Tears labels. This has allowed them to establish two strong global whiskey brands with distribution in over 40 markets worldwide while their own pot still, single malt and grain whiskey matures for release in 2019. More importantly for us though, this means Walsh consumers get access to a brilliant aged single malt expression not available directly through Midleton or elsewhere.

The Irishman Single Malt is especially exciting because despite Midleton supplying the whiskey, they hadn’t bottled any single malt themselves until recently, under their super premium ‘Method and Madness’ range which was unveiled in Dublin last week. Previously a certain mystique had crept in around The Irishman Single Malt’s provenance with some reviewers, including Jim Murray, speculating that the juice may actually come from the world’s oldest distillers, Bushmills, originally. Keeping our ear to the ground in the whisky trade we’ve also heard plenty of rumours that Midleton supplies Bushmills with grain whiskey for their blends in return for its triple distilled single malt, but the official word from Walsh upon questioning them is that it’s Midleton whiskey, pure and simple! At any rate, whatever we make of the trade gossip, it’s safe to say this month’s whiskey is an absolute rarity and privilege to taste, and the annual limited edition release of only 6000 bottles is highly sought after.

Aged exclusively in first fill flame charred American oak ex-Bourbon casks, The Irishman 12 Year Old Single Malt is triple distilled, natural non-chill filtered and bottled at 43% ABV. A handful of the best barrels were selected to make the cut for the 12 Year Old, producing a mere 6000 bottles. Aside from a few bottles we’re lucky enough to have scored almost the entire of the Australian allocation for the Club, and we hope you enjoy and savour this quintessentially Irish Single Malt.

The Walsh Whiskey Distillery is the quintessential representation of the fantastic, frenetic energy of the current Irish whiskey revival. Back in the day of course, Ireland was actually the world’s biggest whisk(e)y producing nation and claim, much to the Scots’ outrage, to have invented the stuff. Either way they laid the foundation for what we today recognise as the industry. At the height of Irish whiskey’s popularity there were 88 licensed distilleries and even more Irish whiskey was consumed in Scotland than Scotch until a run of very un-Irish bad luck at the turn of the last century. That number dwindled to just two distilleries by the mid 1980s prior to the resurgence triggered by Pernod Ricard’s takeover of Irish Distillers (Midleton Distillery). The demand for Irish whiskey has since attracted tremendous investment, both local and international.

The Irish Whiskey industry is booming again with a 3000% increase since 2002 and almost a billion Euros of investment planned for the next decade. There are currently 18 distilleries in or soon to commence production and another 10 in various stages of planning. While the big charge is being led by Jamesons, with Bushmills and Tullamore DEW in tow, it’s the vast number of smaller newcomers like Walsh, Hibernia, Teeling and Glendalough that illustrate the confidence that the Irish have in their (new) industry. All the while of course, all around the world whisk(e)y connoisseurs like us are licking their lips at the prospect of a more diverse and exciting range of delicious Irish drams to choose from!

Walsh Whiskey Distillery at Royal Oak has the capacity to produce 650,000 cases annually, making it one of the largest independent Irish distilleries and the only independent distillery producing all three styles of Irish whiskey (pot still, malt and grain) in the one still house. In their first year alone they filled around 5000 barrels of pot still, malt and grain whiskey, which for context equates to roughly the entire Tasmanian whisky stock, new and mature, all in one go! These guys mean business, and they’re leading the revival of the 19th century tradition of family owned provincial whiskey distilling in Ireland. Established by Bernard and Rosemary Walsh, their whiskey story begins surprisingly humbly in 1999 when they began blending and bottling Irish coffee. Rosemary used to run a ski chalet in France and in true Irish spirit she’d treat guests to Irish coffee after every evening meal and thus the idea for Hot Irishman Irish Coffee was born. It went down a treat, and today remains one of the company’s key exports. In 2005 they added The Irishman Cream Liqueur and a year later secured a long-term supply agreement with Midleton Distillery (producers of Jameson, Powers, Redbreast, Midleton Very Rare, Green Spot and Yellow Spot) to distill and lay down whiskey stock under contract to their specifications while they began planning their own distillery.

Over the next eight years they released a series of extremely well received whiskeys under The Irishman and Writer’s Tears labels, the former including a triple distilled single malt and the latter being a vatting of single malt (60%) and single pot still (40%) whiskeys (no grain) made from a unique old Irish pot still recipe. Incidentally Writer’s Tears recently made its way into popular culture when pop sensation Katy Perry took to Instagram to share her love of the Irish dram. While their whiskeys went from strength to strength, plans for Walsh’s distillery began to take shape and in 2013 they announced a €25 million partnership with Italian company Illva Saronno to build a dedicated whiskey distillery, warehouses and visitor centre in the small village of Royal Oak in County Carlow, South-East Ireland, the first new whiskey distillery in Carlow and the South-East of Ireland in 200 and 100 years respectively.

Work commenced in 2014 and in 2016, as Ireland celebrated the centenary of the 1916 Easter Rising Rebellion, Bernard and Rosemary Walsh oversaw the commissioning of Walsh Whiskey Distillery and the distillation of its first new make malt spirit. This momentous occasion heralds a new golden era of Irish whiskey and whisk(e)y lovers across the world are getting very excited.