What is a Single Cask Whisky?

This month, The Whisky Club has pulled out all the stops to bring you two real treats. First up, having thrown the challenge to Graham Eunson from Tomatin Distillery to create something super special for our Members, we’re about to deliver to you the first ever 100% Ex-Bourbon Single Cask Tomatin to ever come to Australia. Bottled at 50%, it’s the perfect winter dram.

And if that wasn’t enough, we’ve also got a real treat with an absolutely smashing sherry bomb – Glenlivet Single Cask Edition, 2003 First-Fill ex-Oloroso Sherry Butt, bottled straight from the cask at a stonking 60.1% ABV.

But what exactly does single cask mean? How does it differ to a single malt, we hear you ask? Well, to properly explain this, we’re going to need to go back to the ground level of whisky and work our way to the top.

There are several types of “Scotch” style whisky, the main ones being blended whisky, blended malt, single grain and single malt. No matter the type though, they are all made with either malt whisky, grain whisky, or both.

Grain whisky is made from a variety of grains, such as barley, wheat or maize, and is distilled in a column or reflux still. Think of it as an unfiltered grain vodka that’s had a few years maturing in oak. Cheap and easy to make in bulk, you’ll find it makes up a good portion of blended whiskies, but it’s unlikely you’ll find it bottled and on the shelf at your local. Malt whisky, by comparison, is made strictly from malted barley, and is double or triple distilled in a traditional copper pot still. These two types of whisky form the basic building blocks for every whisky on the market.

Once the whisky has matured appropriately (and that’s a whole other blog post), it can be put to use to create a number of different kinds of whisky.

First up, we have blended whisky. Made by blending grain and malt whisky from any number of distilleries, the master blender’s job is to source a range of whiskies and blend them together to create the particular flavour profile specified. This flexible recipe allows the blender to work around the inevitable variances between the individual casks of whisky used, to result in a very consistent taste batch on batch. You can expect the amount of grain whisky in a blend to increase as the price of the bottle decreases. Well known blended whiskies include Johnnie Walker, Ballantine’s and Chivas Regal.

There is also such a thing as a blended malt whisky. Increasingly popular, they are a blend of malt whisky from two or more distilleries, without any grain whisky in the mix.

The next step up from blends is where we see everything kept in the family. Firstly, and again less often seen in the market place, is single grain whisky. These are grain whiskies that have been made and bottled by only one distillery, and not mixed with malt whisky. Multiple casks (possibly even hundreds or thousands) will be vatted together to create the desired flavour profile, better casks will cancel out the weaker casks, and create an overall, and reproducible flavour. Single grain releases are mostly seen from Irish whiskey names like Teeling, Gendalough and Hyde, though there’s the occasional single grain from Scotland such as Haig Club.

Next, and no doubt into more familiar territory to Club Members, we have single malt whisky. It should come as no surprise that single malt is the same deal as single grain, only made with malt whisky. All the whisky must be from the one distillery, and not mixed with any grain whisky whatsoever. As with single grain, many different casks are brought together by the Master Blender to create different flavours – perhaps a series of ex-bourbon casks are vatted together, it could be a batch of ex-sherry or port casks, or a mixture of various cask types.

The options are limitless and the whole process is a fascinating mix of art and science, with delicious results. Just as limitless seems to be the number of single malts on the market nowadays, with distilleries bottling more and more of their whisky as a single malt instead of selling it off to go into blends than ever before.

So we go from blended whisky which brings both grain and malt whiskies from a range of distilleries together, to single grain and single malts, created from the one distillery, but using a multitude of casks blended together. But for the ultimate showcase for a distillery’s work you can’t go past a single cask. A bottle of single cask whisky contains malt whisky not only from one distillery, but from one single cask. There’s nowhere for mistakes or bad casks to hide here, only the absolute best of the best whisky is chosen to be bottled as a single cask, a premium class of whisky to showcase the distilleries finest work. 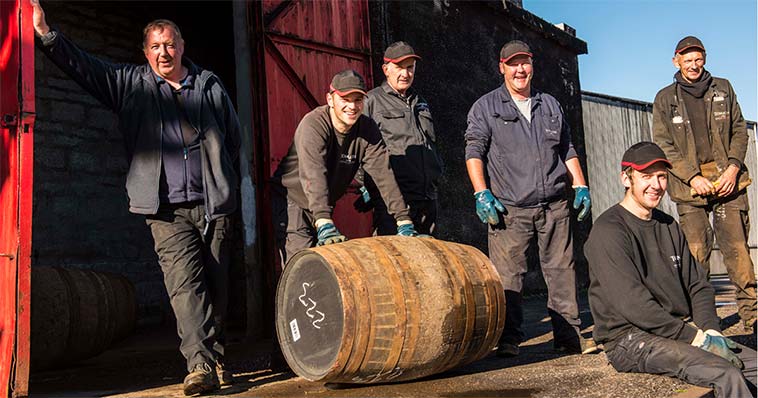 Of course, this means any single cask whisky is of extremely limited production, governed by both the size of the cask, and the loss to the “Angels’ Share”. Thanks to the small numbers of bottles, single cask bottles will generally offer plenty of information on the label, including details such as the cask number, distillation and bottling dates, and often the bottles will be individually numbered.

We’re stoked to have two incredible single cask releases for Members for June. Both our Tomatin 2008 Single Cask and The Glenlivet Single Cask Edition are both amazing examples of what single cask whisky can be.

Graham Eunson from Tomatin has painstakingly selected a number of casks, all distilled, filled and bottled on the same day, that showed very similar characteristics. There may be slight variances between the casks, but since that’s the beauty of a single cask, if your friend gets a bottle too (or you double up) and are able to compare casks side by side, we’d strongly encourage you to do so. 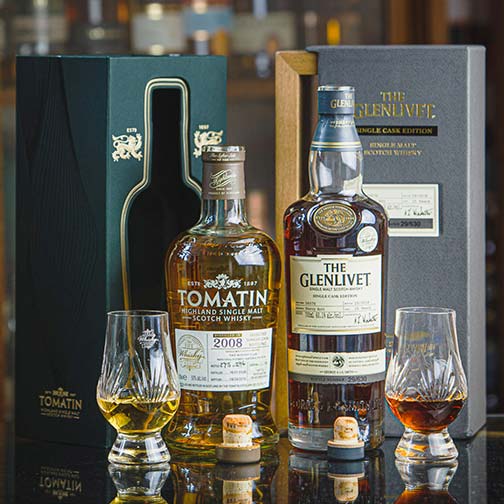 The Glenlivet’s Master Distiller Alan Winchester has achieved legendary status in the industry, so you know when he’s selected a cask for single cask bottling, it’s going to be nothing short of mega. Deemed perfectly ripe for bottling at 15 years of age, Sherry Butt cask 56070 yielded 630 bottles, and the only place in the world you can get one is from the Club.

Don’t miss your chance to add two true collector’s items to your whisky shelf this month. The Tomatin 2008 First-Fill Ex-Bourbon Single Cask Single Cask and The Glenlivet Single Cask Edition, 2003 First-Fill ex-Oloroso Sherry Butt are exclusively available to Members of The Whisky Club in June. Not yet a Member? Sign Up to the Club free today.